Sparsely attended, the game against Siena was still enjoyable because it was good to be back with the "family" again - the same ushers, food workers, security staff, sports journalists, and basically the same team members. Familiarity is comfortable, and everyone was greeting each other with smiles.

Ime Udoka has returned to the family as an assistant coach. Here he converses with another assistant, Chad Forcier, who had his daughter on the court for warmups - yes, I told you it was all about family. 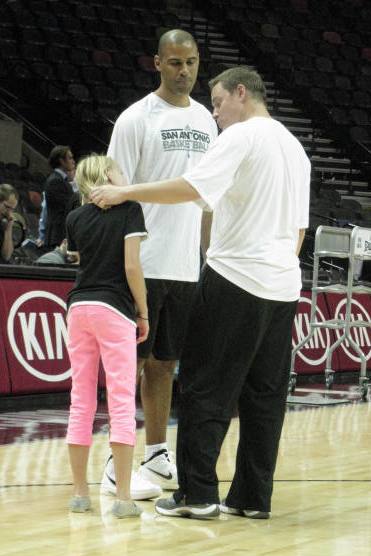 I'm doing this post as a FanPost because I am too lazy to go through the training and hoops to learn how to post it as a story (mild editorial comment there, JRW). The Spurs family grew this summer - Bonner and Splitter became papas. This is not the best photo, but I didn't want to intrude: the tiny little boy is Tiago's new son (a fellow PTR poster suggested we call Sparkles' offspring "Sprinkles"). Also in the pic are Manu's twins, who are more mobile than last season. Late in the game, Manu waved at them as they sat near the bench. That was all it took for one of them to take off and head to the bench - only quick intervention by mom and the security staff prevented him from getting there (made it to about 8 feet away). 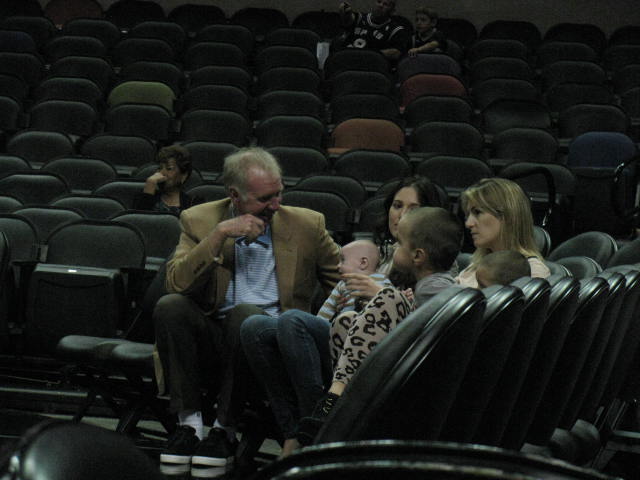 The best sight was seeing Skinny Timmy come out for warmups. He looks amazing and actually runs the court with more "smoothness" than I remember for many years. 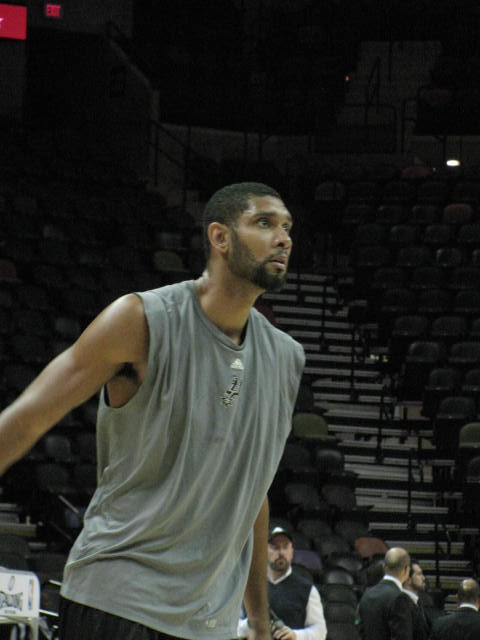 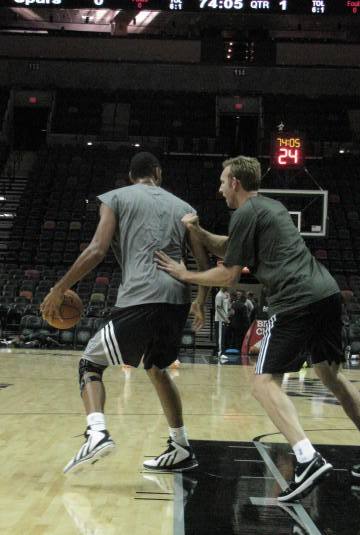 Pop is concentrating on defense in camp so far. He certainly got it from Manu in this shot. If you look up "body up" in the basketball dictionary, below it would be this picture as an example: 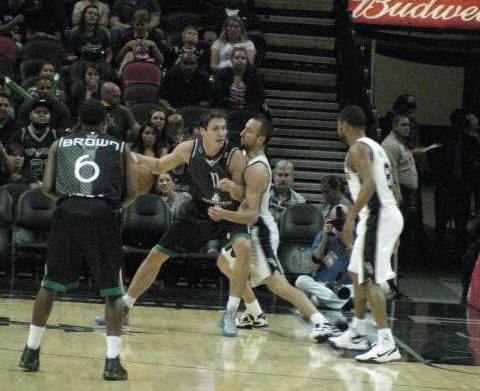 Introductions brought what I hope won't become a new tradition: Tony was sandwiched by Patty Mills and Jackson when he ran onto the court. 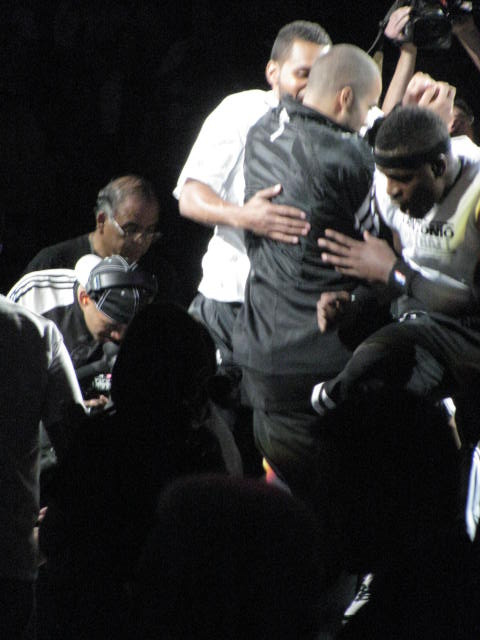 Kawhi seemed more comfortable - he actually was smiling and joking a little during warmups! He had a couple of nice dunks - 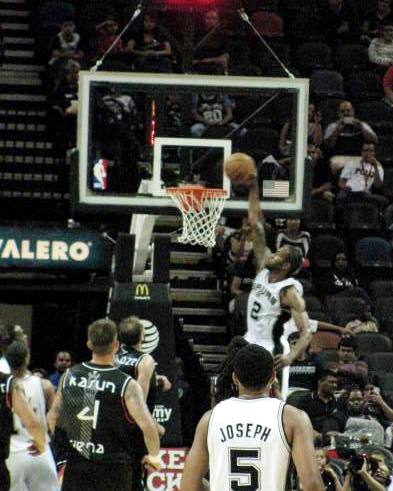 DeJuan has added a headband to his uniform this year - looks a lot like LeBron to me. 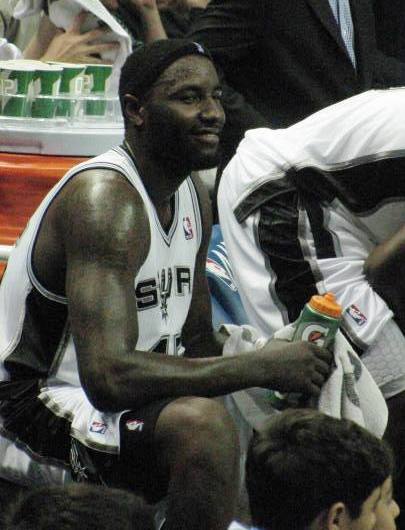 Eddy Curry is a BIG guy! 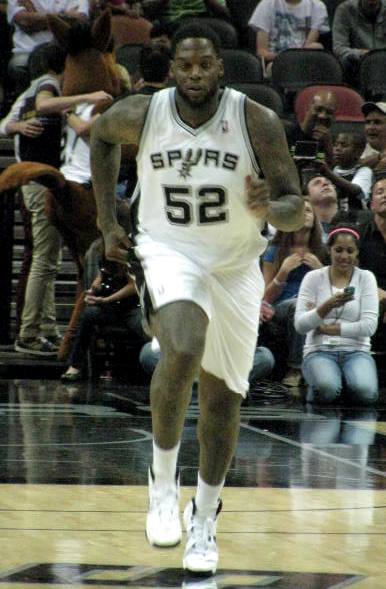 Stephen Jackson is big, very big, on the high fives. Here he demonstrates an over-the-shoulder-triple high five with Neal and Bonner. 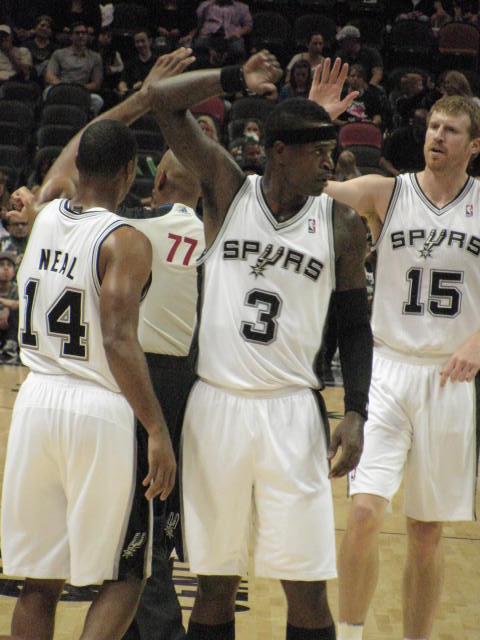 It's a time out in the second half - Pop is trying to huddle, but his team is preoccupied. What are they watching? 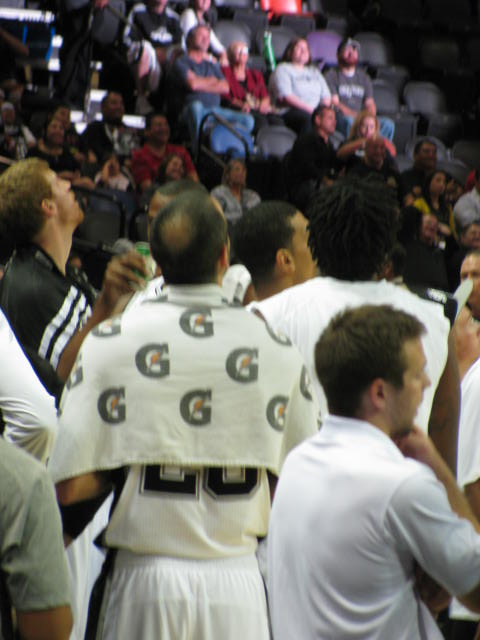