Coming off an emotional win against the Nuggets the night before, I'm not sure if we should have expected anything other than what the Spurs gave Sunday night. When both teams have games the night before, it's clearly to the younger team's benefit, and the Oklahoma City Thunder took full advantage of the Spurs.

The Spurs played a competitive first half. At the end of the first quarter, the Spurs only trailed by two points, 22 - 24. But you got the sense that the Spurs were fortunate to not be down more. At the half, the Spurs trailed by 6, but again it felt as if the teams were playing at different levels than the score indicated.

The Spurs simply looked flat. Shots that had been falling previous nights rimmed out. The hustle, while still present, seemed a step slow. And to make matters worse, the officials seemed to call a disproportionate number of touch fouls on the Spurs. Those momentum killing ticky-tacks had an impact on our already desperate team.

But to be fair, the aggressor gets the calls, and the Thunder were truly the agressors last night. They looked sharp and we looked tired. Very tired. And OKC, who was completing their first ever Triple Lindy, looked fresh ready to keep on playing. The game slipped away after halftime, when the dreaded TQC resurfaced as though it was 2009 all over again, and it was Manu's right ankle (and not the fifth metacarpal of his lefty) that was keeping him out of the game. Both Tony Parker and DeJuan Blair sustained injuries in the third and did not return, although both seemed fine after the game and shouldn't be expected to miss any games. The athleticism and youth of the Thunder allowed them to punish our road weary team.

The good news is that it was a game that we were supposed to lose, according to my FSGOS, "Fred's Scariness-of-Game Score." Our two toughest games so far, as dictated by our schedule, have been the game we lost at Houston and this blowout in Oklahoma. Both of those had a FSOGS of 5. I say it's good news because we only have 16 games with a rank of 4 or higher this year (with the worst being the 3/17 game in Dallas, the Triple Lindy landing in Sacramento on 4/18, and the game just prior to that, in LA against the Lakers -- hope you have fun at that one, Mr. Wilco!).

If we lost all of these difficult games, that would give us a record of 49 - 17. That's not too bad at all. I know that the Spurs will not lose all of the difficult games and win the easy ones, we already have a Minnesota example for that, I'm just pointing out that our schedule is not impossible. In addition, the second half of the year is when our schedule gets really brutal, and that just happens to be when we should be getting our best player back. 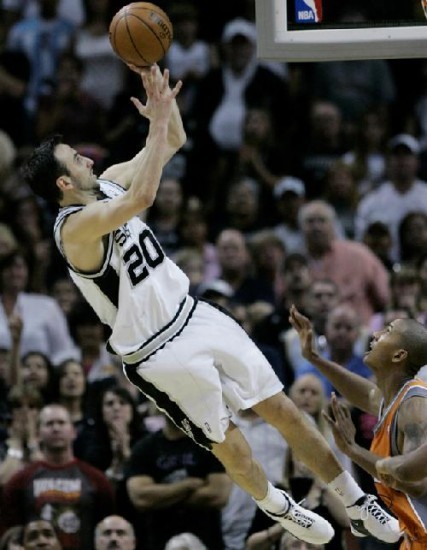 So, let's not hit the panic button just yet. I know our road record is awful, but it's only been three games. Our schedule made the Houston and OKC games extremely difficult, and we lost our best player in Minnesota, which definitley changed the complexion of that game.

3.) Kawhi Leonard
In extended minutes, Kawhi managed to record his first double-double with 13 points and 10 rebounds. He's looking more and more comfortable on the court and that can only be beneficial for the Spurs.

1.) Minutes Played
Tim, Tony, and RJ played 23, 25, and 19 minutes, respectively. Kawhi, Neal, Green, and Anderson played 34, 28, 21, and 17 minutes, respectively. If the Spurs are going to lose, I would much prefer a blowout so that Pop has the option of resting the guys that need rest and playing the guys that need playing time. A loss stings, but the minutes played lessens the blow.