How to best assign blame for the loss to Memphis

Share All sharing options for: How to best assign blame for the loss to Memphis

It boils down to this: last year's Spurs did not have an answer for the Grizzlies when playing with a less-than-fully-healthy Manu Ginobili. The overall size of Memphis disrupted everything the Spurs offense had done well all season long. It wasn't just that they were big in the frontcourt with Zach Randolph and Marc Gasol pushing around Duncan, McDyess, Splitter, and Blair; it was also their length on the wings that enabled them to handle the offensive wrinkles that Pop and the coaching staff (PATCS? maybe not) threw at them, without having to change their preferred lineups. I had a discussion with SpursfanSteve (before the season opener and, of course, Manu's injury) and we talked about the end of last season, how it could be evaluated, what should be done for this season, and some possible tweaks for the lineup. It's pretty impressive when you see how many things SfS really hit right on the head, from the things we've seen over the first nine games.

J.R. Wilco: so, what do you think the Spurs should do right now?

SpursfanSteve: One of two things: either start Tony, Anderson, Leonard, Blair, and Duncan, bring Neal, Manu, Jefferson, Bonner and Splitter off the bench, or start the same five, but waive RJ and bring Green/Butler off the bench in his place. Either way, I think we need Green on our roster.

jrw: Well, before discussing your idea, since it has no chance of actually being used - you think Green will make the team?

sfs: I think he should. He's a good defender, aggressive on both ends, rebounds well for his size, and is not afraid of taking the 3 if he's open.

sfs: Neal and Manu have been sufficient. I don't think when it comes to ballhandling we'll miss Hill that much. Intangibles like Green has, is where we will miss Hill.

jrw: Ok, so walk me through what you think your new proposed starting five would be capable of.

sfs: Well, it's roughly the same 5 we saw tear through the league last year, with Kawhi instead of RJ, which, considering he's new, I wouldn't expect that to be an immediate upgrade production wise (at least in the starting 5).

jrw: The same five, with and Anderson starting at SG?

sfs: Didn't he start some at the very beginning last year right before he got hurt? I may be wrong.

me: I don't believe he ever started, but even if he did, he certainly wasn't part of "the starting 5 that tore through the league." =]

sfs: Touché. Regardless, I think that lineup optimizes all 5's strengths and stays relatively solid defensively

jrw: I love the idea. I really do. I just am not optimistic about it's chances of seeing a single glimpse of reality. Which leads me to another question - do you really feel like the Spurs tore through the league last year?

sfs: Only until the last 2 weeks of the season

jrw: Loooking at the standings, I'd agree with you, but I think they got VERY lucky. Without even trying, I can think of 4 bounces of the ball that would have swung 4 games: 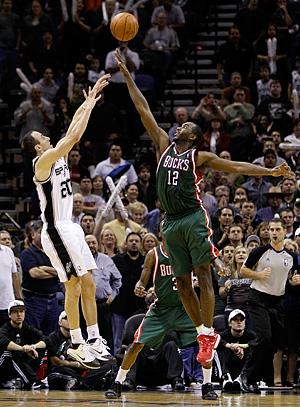 More of this soon, Manu, if you please.
via sinbapointforward

sfs: Can't we say the same thing about the Memphis series?

jrw: Oh, you could say the same plenty of series, but when a team is really dominant, sure, they have close games, but they're regularly blowing teams out and enforcing their will. I feel like after the first 20 games or so, while the Spurs played very good ball, benefited from a ton of luck and if last season was played 10 times I think last year's record is the best of them all.

sfs: I'm...not sure. I tend to think we swung from one extreme to the other, at the best and worst times possible

We need consistency, and we lived and died by our bench last year. I think the only way to keep the bench from dropping off too much in pressure situations is to put Manu back there.

jrw: I'm not opposed to putting Manu back, but I'm trying to think about whether I agree that we lived and died by our bench. So, you're saying that, for the most part our starters treaded water, and then our bench pulled ahead while going against the other 2nd unit?

jrw: So you're saying that last year: bench plays good = victory, starters play good = game still in doubt depending on the play of the bench.

sfs: As a general trend, yes.

jrw: Very interesting observation, and it's not one that I can disagree with. Ok, switching gears, what's the result of the Memphis series if: a) Manu doesn't play game 82 and begins the playoffs in perfect health, or b) Manu's still the same as he was, but RJ hits his 3 at the end of Game 1, and the Spurs win.

jrw: So you don't buy the theory that MEM played over their heads during the series b/c their confidence was buoyed by taking G1 on the road?

sfs: I buy into it a little bit, but not enough that I'd say we'd win for sure without Manu at 100%.

Anyway, I think having Manu, Tony, and Tim in the starting lineup just doesn't maximize what we can get from all 3 of them. And since RJ plays best with Manu, it makes sense to send both back to the bench and hopefully accelerate the learning curve for &erson and Leonard.

sfs: Blair should start, IMO, because he's our best PnR big and because Duncan can best cover his weaknesses

Also, we've always had one player that plays outside of the system, plays as much on instinct as he does what Pop wants him to do. Manu has always been that guy. But Blair needs to be. His instincts are his strengths, he's so good at finding space around the basket. And also, you know, rebounding.

Well, those are all of my questions. Thanks for granting me this time for my interview. I'll have the piece posted so that your followers can discuss what they think about your theories. =]

sfs: Yes, absolutely. And you can interview me anytime.