AT&T Center — The optimistic Spurs fan went into this stretch without Manu Ginobili in the lineup with the "blessing-in-disguise" mindset, endorsing the idea LWM would afford an opportunity for the younger players on the bench to gain valuable experience and cohesion within the San Antonio system.

And so far, the three games played by the Manu-less Spurs have yielded one result over any other in my eyes: Danny Green can play.

But while it was Greensleeves (which is yet another gem from the master of the moniker himself, JRW) who stood out with his career night, it was another Spur whose consistency is beginning to give me reason to trust. And I'm coming dangerously close to putting my complete faith in Richard Jefferson.

With the Spurs up by five points and just more than two minutes remaining in the fourth, his chase-down block on the speedy Ty Lawson saved the Spurs from what would have been a one-possession game in the final moments. But it was his 3-pointer at the other end that provided the dagger and sent the AT&T Center into a frenzy on the way to a 121-117 Spurs win.

"They had been running it down our throats all game long, and I was just glad I was able to catch up with Ty Lawson. He's so quick," Jefferson said of his block on the Denver point guard. "I was just able to get a hand on the ball ... I saw that he was down and I was up so I just tried to sprint back. We had a ton of assists tonight, and none more important than the one on that play."

Jefferson stepped in off the secondary break to hit his fifth three of the game with absolutely no hesitation, and the formerly much-maligned swingman pumped his fist with as much emotion as we've seen out of him in his third year as a Spur. This means something to him, and you can tell. Whether it's his passion to win or to prove his many doubters wrong, RJ - who's shooting nearly 57 percent from the arc so far this season - is rolling right now.

Richard Jefferson 3.0 is looking like the best version yet.

But let's get back to Danny Green now. The North Carolina product set a career high with 24 points, and his activity on the defensive side of the ball accented what is turning out to be a very well-rounded set of skills. His seven rebounds, two steals and two blocks were a result of constant energy and movement, and those attributes have proven quite valuable over the last several games when he's been asked to defend the likes of Ricky Rubio, Monta Ellis and Jason Terry. He's defending well and connecting from deep: two things that will get you some court time from Coach Pop.

But it wasn't just the open 3-point shot that provided the scoring opportunities for Green on his career night, it was an array of shots we aren't all accustomed to seeing from the third-year pro. Obviously threes are a major facet of the Spurs' offense - Green was 3-for-4 from downtown - but it was his aggressiveness getting to the basket and finishing with both hands that's giving the Spurs an element of the game that's sorely missed during Ginobili's absence. San Antonio is almost always going to get open looks from the arc off penetration (especially on nights like tonight where the scoring resembled that of an ABA game), but when Green is getting in the lane and using his athleticism to create offense it makes the Spurs that much more difficult to defend.

Green, the Spurs' newest sixth man, has been the big story off the bench in San Antonio, but the second unit as a whole has been extremely impressive. That starts with T.J. Ford. He's starting to remind people he, too, can play after spending most of his career dealing with serious injuries and toiling away in virtual anonymity on bad NBA teams.

Ford is currently assisting on nearly 37 percent of the Spurs' field goals while he's on the floor, and he's averaging nearly five dimes per game in just over 17 minutes a contest. His ability to create easy scoring opportunities has been invaluable given he's often surrounded by young, inexperienced players on the second unit. I know we all loved George Hill, but what the Spurs have not had in years is a backup point guard capable of producing high assist rates while on the court. Hill's scoring ability was huge in so many situations, but he didn't necessarily make everyone around him better all the time. When Hill was cold offensively the Spurs' offense would often go stagnant, and that's why Manu would get significant time playing with the bench: to give it a playmaker. 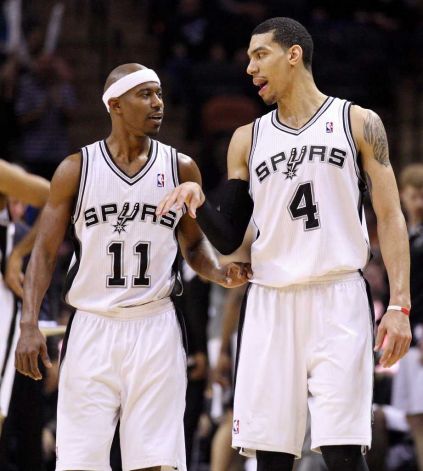 T.J. Ford and Danny Green have already exceeded expectations in their short time in San Antonio

(via Edward A. Ornelas of the San Antonio Express-News)

But now Ford is giving San Antonio another distributor, and he's a major reason why guys like Green are getting off. In the NBA, open looks more often than not result in points, and the Spurs are getting plenty of those against opponents' benches so far this year.

"For me it's just making sure everybody is a weapon when we're out there," Ford said after the game while talking to the media, something that may become routine for him as the season wears on. "So far we've been able to do that in every game here at home, but we have to continue to take that same focus, that same intensity on the road."

As I look back at that night in Minnesota when Manu's seemingly harmless reach-in changed the landscape of San Antonio's season, I revert back to the thoughts going through my head at the time. It felt like doomsday, and for good reason. We all knew what the Spurs record was without Manu Ginobili in years past, and that was a cause for major concern during a season that had started with so much promise.

But here we are 3-0 without El Contusion in the lineup (6-2 overall), and if the Spurs can find a way to pull one off tonight in Oklahoma City they'll be the West's top seed in the early going. And once again the basketball gods seem to be smiling. I don't mean to play devil's advocate here, but San Antonio has been the recipient of some good fortune ... since the Manu injury, that is.

Let's take a quick look back on the past five days. During the first game without Manu the Spurs were really struggling to get things going against the Warriors. If you couple that with the fact Monta Ellis and Stephen Curry were filling it up, things weren't necessarily looking good. But late in the third quarter, Curry, with nobody around him, once again tweaks his porcelain ankle as he tried to trigger a fast break. Steph already had 20 points and eight assists in the game that night, and while Ellis was on his way to exploding for 38 points, he didn't have that outlet that makes the Warrior backcourt so dangerous. The Spurs were able to stick Green on Ellis in the fourth and not really have to worry about anyone else.

Fast forward to the next night where the Spurs' opponent, the Mavs, had no legs to speak of after a stretch of six games in eight nights. Yes, the Spurs played well on the SEGABABA, but as we've already talked about, Dallas was dead tired. Now, enter the the Nuggets on Saturday night with a frontcourt devoid of Nene Hilario, the team's best player (or at least its highest-paid). On top of that, Denver was playing their second game in the midst of the NBA's version of the Triple Lindy, which, according to media reports, was the reason Nene was in street clothes. The Nuggets didn't want him playing on back-to-back nights.

But nothing's wrong with a little luck. I mean, the Spurs' luck couldn't have been much worse about a week ago, so it's as if karma is reciprocating the favor for San Antonio. And the silver and black will take it. Sure, we might be looking at a string of good fortune that culminates tonight in Oklahoma City, where the Thunder are playing their third game in as many nights, but the Spurs don't care. Nor should they. You play whom the schedule dictates you do, and you don't concern yourself with the plight of the opposition. You just play.

A week ago pundits were prognosticating the Spurs just needed to "tread water" in Manu's absence, keeping their record at or near even until their All-World shooting guard returns.

But it appears, at least for now, San Antonio has no interest in playing .500 basketball.