Well it was oh so nice for the NBA schedulers to give the Spurs a night off, don't you think? It must have felt like a mini vacation. I hope the boys in black got their beauty sleep, because tonight begins a pretty challenging weekend, hosting the Nuggets tonight and then visiting the Thunder less than twenty-four hours later. These are definitely the two toughest games of the LWM so far. Should be loads of fun. Let's get to it, shall we?

The Nuggets are finishing their own back-to-back, having played in NOLA last night. Denver is off to a strong start, picking up where they left off last season after the Knicks trade. As we all know, they gave up Carmelo Anthony and Chauncey Billups after what seemed like a months-long soap opera of doubt, but the cupboard is far from bare, and Denver has been playing really good ball since then. They were a tough opponent indeed for the Spurs after that February trade, playing with a lot of skill, hunger and hustle. I guess that whole "addition by subtraction" cliche is sometimes true after all. Good for them. Sure, for selfish reasons I would have liked to see Carmelo stay in a Nuggets jersey, but only because it would give Manu at least four times a season to potentially draw a game-winning charge on him. Sigh. Come back soon, Manu. 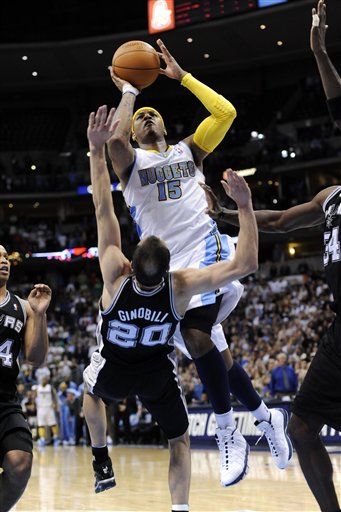 So neither of these guys is playing tonight, huh?

In this young season, the Nuggets are sitting pretty with the second highest scoring team in the league. And they are sharing the wealth, too, with six different players averaging double figures in scoring. As of this writing, they rank 6th in assists, more evidence of a team that is both unselfish and prolific on offense. They are getting to the line, ranking third in the league in free throw attempts. The Nuggets have a formidable front court, with Nene, Al Harrington, and the Illustrated Man himself, Chris Andersen, all contributing length and points. Added to the mix is Timofey Mozgov, a seven footer that they acquired in that Knicks trade. He was kind of an afterthought in the trade, but he is currently their starter, and although he doesn't get huge minutes, he can block shots and rebound. Denver has length and depth that will definitely challenge the Spurs. Maybe we get to see a little more playing time for Ike Diogu tonight to bolster our bigs, who admittedly are playing bigger this season. Timmy hasn't found his shot with any consistency yet, but that will come, and he is showing some great defense. Meanwhile both Splitter and Blair have really stepped up their defense this season, as well. As for their offense, well... Right now, it's pretty offensive. Keep at it, Chip.

The Nuggets' leading scorer is point guard Ty Lawson, averaging 16.7 a game, but like I say, these guys share the scoring load. Small forward Gallinari is a tough matchup. He reminds me of Dirk Nowitzki in some ways--tall, kind of moves awkwardly, but he can take it to the rim and has a nice jump shot. Arron Afflalo is a fine player, who is averaging 10 points a game and can apply some tough defense. Rudy Fernandez and Andre Miller are part of a veteran and productive bench. About the only guy who hasn't gotten into the act yet is the rookie from UTEP that at least one Pounder covets tremendously. But, who knows? Maybe tonight will be the NBA debut of Julyan Stone. I don't know if the Nuggets have anybody who is currently playing at an All Star level, but they are crazy deep. These guys, as always, love to run, so the Spurs really need to take care of the ball and minimize turnovers. One thing to note about the Nuggets: they are defending, too. They are giving up just 93 points a game, and according to Basketball-Reference.com, guess who leads the league in Defensive Rating? No it's not the Bulls or Heat, it's the Denver Nuggets. In last night's victory over the Hornets, Denver showed what they are capable of. The game was close, low-scoring and hard fought, until the Nuggets put on a 19-0 run starting late in the third quarter to put the game away. That run was fueled by several forced turnovers that ended with fast break points, just the kind of stretch that this Nuggets team thrives on.

The Spurs and the Nuggets are both playing good basketball to start off the season, and I expect this to be a great game. San Antone looked a little gassed the second half of that Mavericks game, but beating up on defenseless little ponies can take a lot out of you, and a day off should help. We will be missing Manu for some time; obviously, there are some things you can't replace, even if you're Dr. Frankenstein, and Manu was playing at such a high level when he went down. Jefferson and Parker are going to have to continue playing great, and guys like Neal, Green and Anderson are going to need to chip in. But that is exactly what has been happening so far. It is exciting seeing the young guys start to contribute significantly. Personally, I have been very encouraged by the Spurs' defense. Last season, I kept looking in vain for any signs that the defense was coming around, but really it never materialized. Guys like Splitter, Blair, Leonard and Green have added some defensive stuff to the mix, and I really think our team defense has a higher ceiling this season. Tonight is a good early test with the high-flying Nuggets coming to town.