Building Another Ginobili: How to Survive Six Weeks Without Manu

Share All sharing options for: Building Another Ginobili: How to Survive Six Weeks Without Manu 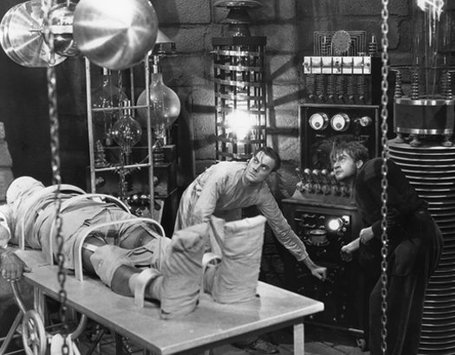 I don’t know if you guys heard but Manu Ginobili broke the 5th metacarpal bone on his left hand. Why yes, that is his shooting hand, thanks for asking. Fortunately it's not a season-ending injury. In 6 weeks or so he'll be back and that leaves plenty of time for him to regain his form before the playoffs. But while we wait for The Sickness to return, someone is going to have to pick up the slack. Asking someone to pick up the cape and wear it would be silly. No mere mortal can do that. But maybe a combination of mere mortals can come close to matching Manu’s superhuman skills. Let me take off my assistant skirtt my fan hat and put on my mad scientist scrubs and let's try to assemble us a new Manu using the skills other players don't seem to be using to their full potential.

*All stats courtesy of Basketball-Reference. The Mavs game is not included, since it was an anomaly.

Manu was averaging a team leading 19.8 points per game (in the contests he finished) on .592% shooting from the field and a whopping .519% from 3. His True Shooting % was .776, good for second best in the league. Who is going to be able to provide something like that? 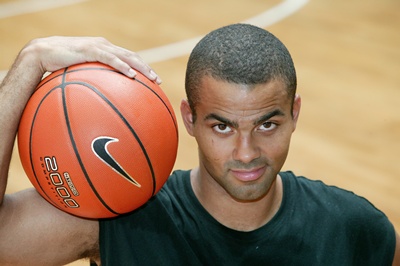 
Non other than Tony Parker. Parker has been always a fantastic scorer who can slice through defenses and has a career average field goal percentage of .492, good for 20th among active players and best for any guard. This season he is averaging 14.5 points per game. That's 3 point less than last season (17.5). Without Manu I expect Tony's scoring to rise at least to his career average of 16.7, but it really wouldn't be that crazy to think he could achieve a similar average than his career best of 22.0 (2008-2009). Guess who missed most of that season due to injury? HINT: his name rhymes with Zinobili.

And then there's Richard Jefferson, whose career usage percentage was in the mid twenties when he came to the Spurs. He never got above 15% in his first two years wearing the silver and black. While his true shooting percentage has increased in his time in San Antonio, during his days as a volume shooter he was efficient enough. Given the touches, RJ produces. And he's off to another hot start this year. We'll see if he can keep it going as his opportunities increase.

OK, so the scoring part is covered. "But what about spacing?", you say. "Tony Parker can't shoot the 3 and his mid-range game comes and goes." That's true. Manu was shooting a ridiculous percentage from 3 and Parker can't do that. But you may recognize this freckled-face guy who led all scorers in last night's demolition of the ponies. 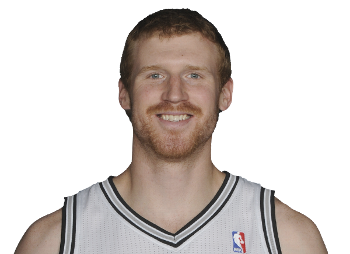 
Matt Bonner is a career .412 3 point shooter. Before Thursday's game he was shooting a career worst .316 form 3. I expect to see that number go up eventually.

"But you can't rely on Matt Bonner to hit shots when it counts", you gripe. To that I have two things to say. First, stop interrupting me. It's rude. Second, in case ol' Matty pulls a disappearing act, the Spurs have a guy who is not afraid of taking big shots: Gary Neal. The Nail hit some huge shots his rookie season with the Spurs and after an appendectomy kept him from playing, is ready to return to action. Did I mention that he shot .419% from 3 last season? I didn't? Well, he did.

As if those two weren't enough, RJamnesty keeps shooting the ball extremely well (.581 from 3). Even if his amazing true shooting percentage of .691 takes a dip from its current stratospheric heights as his usage is increased, he would still be a valuable floor-spacer for the team.

Here's where things get tricky. Manu is a fantastic creator. He is one of the best pick and roll shooting guards in the league and guys like DeJuan Blair and newly signed Ike Diogu could have benefited from his court vision. Fortunately, Tony Parker is a pretty good pick and roll ball handler as well and, while he may lack Manu's flash, he can thread the needle when is necessary and takes better care of the ball. 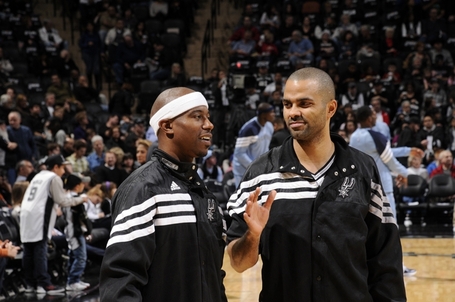 Congrats TJ. You'll get to do more than just dribble the ball up court.

Back up point guard T.J. Ford knows how to run an offense and find the open man, as his career Assist Percentage of 34.1 shows. With Manu sidelined, he will have a chance to have the ball in his hands more with the second unit. He's already making the best of his time, getting 8 assists against the Warriors.

And then there's the wild card, James Anderson. In limited reps, &erson has shown that he can run the pick and roll in a pinch.You add him to TJ, Tony and RJ 3.0's new-found ability as a pick and roll ball handler, and baby you got a stew going! 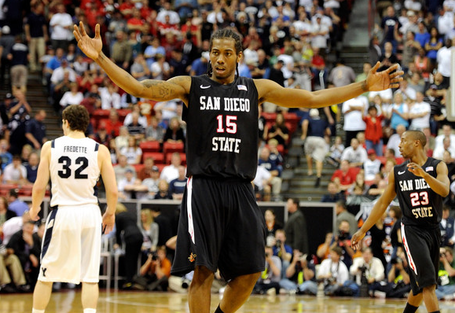 Just look at that wingspan.

This season Manu had a defensive rating of 101. The team's defensive rating was 103.6. That means the team allowed 2.6 less points per 100 possessions with Manu playing. Neal (109 DRtg last season) and Anderson (107 DRtg), for all their offensive prowess, are not particularly strong defenders. But fear not, because a rookie with hands like baseball gloves and lengthy limbs is here to rescue us. Kawhi Leonard's defensive rating (99) is reminiscent of the old Spurs. Paired with the more defensively-challenged guards, he can more than make up some of their deficiencies. He can also disrupt passing lanes like Manu did but also cover bigger players and rebound the ball.

Danny Green (105 DRtg) is no slouch on the defensive side, either, and provides versatility to the defense since he can effectively guard three positions. With more playing time and more showings like he had against the Timberwolves and Warriors, Green could makes us forget about a certain IUPUI alumnus. 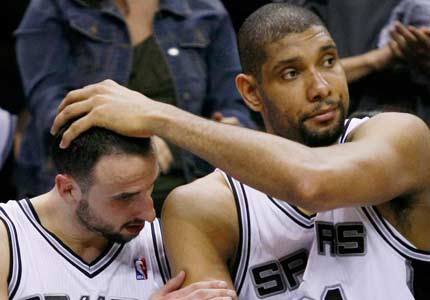 Don't worry Manu. I got this.

Timmy is one of the best lead-by-example guys out there, but don't think for a second that Big Fun can't be a vocal leader when he needs to. His technical against the Warriors just goes to show that the old man is not going to sit idly and watch the team lose. He upped his defensive production and his fire seemed to reach his teammates.

Also, there's always Extraneous G himself to yell at the kids to get off his lawn when they screw up. Not even 10-year veteran All-Star point guards are immune to Pop's rage, as I'm sure Tony Parker will attest to. Pop has also tried to deflect the added pressure that having a great player like Manu in business casual attire brings to the team off of the young players and direct it instead to his veteran and to himself. That's leadership.

Well, that, my friends, is impossible to replace. I'm not sure there are a lot of guys out there that can do this. Or this. Or this. Or this. But who knows. Maybe the proverbial lightning strikes and gives our Frankenstein monster enough life that those amazing moments are not needed. They will be sorely missed by anyone who loves the game, though.