During the course of Golden State's last 27 fruitless visits to San Antonio, a Spurs victory has almost become an expectation. But this wasn't one of those easy 101-95 wins that Spurs fans have become accustomed to while hosting the ragtag Warriors, it was a grind. And it's sure to be the first of many to come as the team settles in for LWM -- Life Without Manu.

After struggling to find and sustain consistent offense through the first three quarters, San Antonio finally found the right combination down the stretch. And speaking of ragtag -- the lineup that found the rhythm, the right blend of defense and offensive, well it looked more like the kind of random combination you'd see during the second quarter of a preseason game.

The trio of T.J. Ford, Danny Green and Richard Jefferson played the entire fourth quarter. Timmy and Tony joined them later in the frame to form a small-ball lineup that was finally able to handle a young, small, active Warriors attack.

With Manu out, it's natural to expect the other members of San Antonio's Big 3 to step up in crunch time, and they did. Tony Parker's step-back jumper, which had been inconsistent all night, finally started to fall along with his floater as he scored 10 of his 21 points in the fourth, and Duncan seemed energized on the defensive end with two vintage rejections and six boards in the final quarter.

But again, these things HAVE to happen with Ginobili in street clothes. Parker and Duncan must elevate their games to make up for the absence of the Spurs' best player. We know this. What observers of Wednesday's game witnessed was the first example of what will be a long, evolving process, one that's sure to see many changes along the way (depending on the opponent), and one that will need to feature different players stepping up on different nights. Outside of Timmy and Tony, it's difficult to know what to expect. And, really, on the second night of a back-to-back we probably don't know what we'll see even out of what remains of the Big Three.

But what we got tonight was encouraging, mostly because that supposed depth at the wing position was not a mirage.

Popovich put it nicely prior to the game, as he spoke about the expectations the media and the fans are putting on first-round picks James Anderson and Kawhi Leonard, stating the onus is not on them. Instead, he said, it's on Duncan, Parker, himself and, surprisingly, after all that amnesty talk, Richard Jefferson.

"We don't have Manu. Obviously he's an All-Star and future Hall-of-Fame guy and all this sort of thing. Duncan, Popovich and Parker and Jefferson need to step up more than putting it on Kawhi Leonard and ... James Anderson. It's more our problem than theirs."

Ah, the succinct yet poignant GOML quote machine. What took place down the stretch proved him eerily prescient, and as the fourth-quarter tension grew, an atypically fired up Coach Pop was imploring, willing his players - Parker in particular - to push the ball against an off-balance Warriors defense. He smelled blood in the water and he wanted his players to attack.

With 3:40 left in the game and the Spurs having just completed an 11-0 run, the Warriors called timeout after a Parker floater made the score 91-88 in favor of San Antonio. After trailing virtually the entire game, things were finally looking good but Pop was livid with his star point guard. A typical Spurs timeout consists of an immediate coaches huddle while the players catch their breath, but there was none of that. A seemingly furious coach was doing what he predicted would be necessary: he stepped up.

Pop stormed out to halfcourt where a grinning Parker, who had just driven the lane to drop in a floater, was finding his way to the bench. As the two met, let's just say the coach wiped the smile off his poing guard's face, literally and forcefully (Or so it seemed from our perspective). We've rarely seen Pop in this type of form, but it was very clear what this moment meant to him. It was more than just a nice, game-changing run against Golden State -- much more. There's no need to delve into the exact meaning of the act, or wander through the head of Popovich, or to press the players for quotes about just what was said. Whatever it was and whatever it meant, it wasn't just about the game at hand.

Now we come to the other guy that Pop listed among the players that, in Manu's absence, the team needs bigger contributions from. Jefferson was simply great on this night.

I'm an optimist through and through, but even with the way he's playing now it's difficult to have complete faith in Jefferson over the long haul. Still, RJ looks different this year. I know he started strong last year as well, but something seems to have clicked. He's flowing so easily within the Spurs' offensive system, it's hard to pass it off as being temporary. His knack for finding the holes in the defense is impossible to miss, especially when he's hitting his shots at the rate he currently is. Jefferson hit every one of his five 3-point attempts in the game, and he continues to fill it up at a quiet yet consistent rate. It's now to the point that if he has an open look, I expect it to drop.

And what's even more crucial right now is RJ's efficiency during his time on the court. Jefferson's 38 minutes were a team high, he produced at a steady rate the entire time, and he's actually starting to look comfortable in the system: something many Spurs fans had given up hope of ever seeing.

Anyone familiar with Monta Ellis knows he's going to put up shots, and this night proved once more why his name is always near the top of the league's highest volume shooters. The explosive swingman put up 30 shots on his way to 38 points, but he had to finish the night without the aid of his sidekick, Stephen Curry, who once again tweaked his fragile right ankle in the third quarter. Still, it didn't seem to bother Ellis much. His array of shots and ability to get them off in a variety of ways was killing the Spurs' defense as one guard after another had his turn at trying to slow down the shameless gunner ... with one exception.

Danny Green, who until this week had been accustomed to bench duty, had shown flashes of his defensive prowess against Ricky Rubio in Minnesota two nights earlier, but it was his defense on the sizzling Ellis that changed this game. Popovich had Green defend Golden State's leading scorer early in the fourth quarter, and it was this chess move that led to the eventual checkmate. His length obviously bothered Ellis, as he wasn't able to elevate and shoot over the top of Green as he had against his defenders earlier in the game. Green said afterward that he knew Monta was going to shoot, it was only a matter of funneling him toward Duncan in the lane and making sure he challenged his shots. That sure sounds familiar, doesn't it?

Lineups will change from night to night and the smallish Golden State lineup certainly provided San Antonio an opportunity to mix and match more easily with its plethora of guards and wings, but T.J. Ford gave the Spurs another playmaker, something the team desperately needs in those times when the offense stagnates. What began with a solid four-assist first half manifested into what easily became the new acquisition's best performance as a Spur.

Following two San Antonio turnovers and a missed shot to begin the fourth period, the diminutive former Longhorn point guard scored or assisted on the Spurs' next five baskets, beginning with a 3-pointer from the top of the key, his first of the season. His ability to push the ball and find the open man was critical given the general lack of that particular skill among those Spurs guards not named Ginobili. While it was easier to play this small lineup against the Warriors than it will be against other teams (RJ was the power forward down the stretch), it was the first example of the kind of coaching and player performance it will take to win over the next 6-8 weeks while The Chemist heals.

Side Note: before the game, JRW and I discussed the possibility of seeing Ford and Parker on the floor at the same time against the small Warriors, with Ford playing the secondary distributor role that Manu fills so well, especially given his passing ability. While this lineup might not work against the bigger backcourts in the league, it's becoming clear that Ford's ability to distribute the ball could be invaluable to the Spurs sans Ginobili.

On to the next one

As previously discussed, Spurs fans have taken these types of games for granted, expecting nothing less than the outcome we saw against a team like the Warriors that San Antonio has now beaten 13 straight times. But it's a different team now and it's important to keep perspective, because without our Argentine, the entire gameplan changes.

Wednesday's game was a struggle at home against a team not likely to make the playoffs. The Warriors are a talented team, no doubt, but they're lottery-bound nonetheless. And they're followed on the schedule by the defending-champion Dallas Mavericks much-despised Fort Worth Ponies in a SEGABABA contest that will present an entirely new world of challenges. It's going to take another fantastic effort from a roster and coaching staff still trying to find cohesion.

Fortunately for the Spurs, the Western Conference is in a tumultuous state. All things considered, there are wins to be had. It is paramount that San Antonio takes advantage of these matchups.

This is going to be a process: the adjustment to LWM. Consider the first step successfully taken. 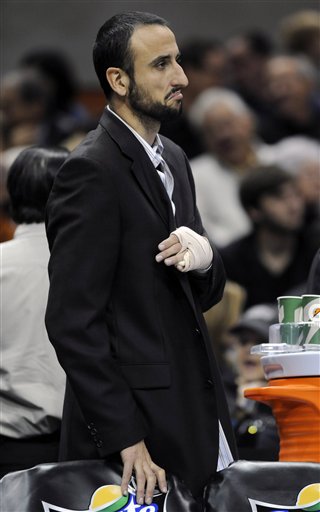