So, the Spurs are to face the champions tonight. The Mavericks. The Spurs will be without cult hero Manu "Batman" Ginobili. It’s clear that San Antonio misses it’s beloved star. Losing to the T-Wolves is bad enough, but then to drop a second straight game against the hapless Warriors would be darn near unbearable. Fortunately, Tony Parker, the Big Fundamental and RJ 3.0 saved the Spurs from being .500 six games into the season. Pop’s crew now sits at 4-2 heading into the back end of a back to back against their North Texas Rivals. The good news? Mavs are on a SEGABABA as well.

So what about those defending champs? The team that thought it could…and I guess they finally did. I suppose in the grand scheme of things I’m happy for the Mavs, mostly because they’re from Texas, my friends that are fans were happy and for Dirk Nowitzki, a deserving champ to be sure. That said, nothing feels better than popping the champs in the teeth, unless they happen to be a hated in-state rival (even better when they have Jason Terry on their team...or the fact that Cuban is rooting for them). 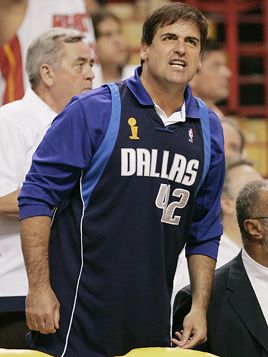 This Mavs team isn’t what it was when they hoisted the trophy back in June. When you lose your best interior defender and rebounder as well as your best bench guard (as much as it pains me to say that) then you add a very over priced (at any price) old player to an already very old team you can’t say that you’re the same team. They did make a nice move by picking up Lamar Odom after the failed trade between NOLA, Houston and the Lakers.

One has to believe, as it’s being thrown about quite a bit in the media, that Mark Cuban is playing for next year’s FA market. I’m sure Cuban would love to lure Dwight Howard and/or Deron Williams to Big D. It would be quite the coup if he could pull it off.

The Mavs aren’t exactly playing like the defending champs so far this season. Sitting at 3-4 after beating the Suns last night at home. Dallas is trying to recover from an ugly season opening loss to the Heat. From my limited knowledge the Mavs main problem is the main problem they’ve always had. Defense. The Mavericks currently rank 27th in scoring defense as well as 27th in rebounding. The loss of Tyson Chandler is clearly hurting this team. That said, they did just beat up Western Conference favorites, the Thunder, holding them to 87 points and keeping the Suns under 90 as well.

The Spurs on the other are right in the middle of the pack as far as scoring defense at 12th in the NBA giving up just over 94 points a game. Their offense, much like last season has been clicking nicely. San Antonio is 7th in scoring and 5th in assists per game. Of course James Anderson, Danny Green and Gary Neal among others will need to step it up in the absences of Manu. The offense will clearly miss Manu, but the defense will also miss his spark and play making ability. I expect to see a lot more of Rookie Kawhi Leonard this game with the heavy minutes the Spurs starters logged last night.

Despite the hard fought victory over Golden State last night, I like the Spurs to come out and take it to the Mavs. I predict an early lead for the Spurs and some sort of Mavs comeback to make it close late. The advantage then lies with the Spurs be being at home and having the better defense. Should be a good one.