Now that's more like it. After a painful loss against the Mavericks in Dallas in the front end of a road back-to-back, the Spurs came out looking for blood and were able to out-execute and out-hustle the Grizzlies en route to a 83 - 73 road win in the battle of South West Division teams missing their best players. The final score doesn't really reflect accurately the dominance with which the Spurs handled a Memphis team coming off a 3-game losing streak. Matt Bonner led the Spurs with 15 points (5-9 from 3 ) while Kawhi Leonard played one of the best games of his young career chipping in 12 points to go with his 10 rebounds and 2 steals. O.J. Mayo was the game's leading scorer with 17. Analysis after the jump.

It was clear that the Spurs had come to play from the 1st quarter. While they struggled containing Marreese Speights to start the game, the good guys' aggresive defense and solid offense resulted in a 17- point lead in the 2nd quarter. After a mini Memphis run, the Spurs went into halftime leading by only 10 points, but were able to manage that lead in the 3rd, never allowing the Grizzlies to close the deficit to less than 9 points. Memphis proceeded to implode under the pressure of San Antonio's defense and some adverse calls by the officials and the Spurs were able to pounce at the right time and secure a 20-point lead going into the final quarter.

I guess the easy way to explain how the Spurs won this one would be to point out to two stats: Offensive rebounding and 3-point shooting. The Spurs dominated the Grizzlies on the boards in the first half, getting 11 of their 14 offensive boards on that time period. Kawhi Leonard led the way with 4 and Danny Green and DeJuan Blair joined the party getting 2 offensive rebounds each. Those extra possessions allowed a hot shooting Spurs team (5-10 3-pointers in the first half) to get that 17- point lead they would go on to use as a buffer against the Grizzlies' charges. The other big factor was defense. The Spurs packed the paint and dared Memphis to beat them from mid-range. Duncan handled Gasol well and the perimeter defenders did a good job of denying easy dribble penetration while forcing turnovers. Kawhi Leonard in particular was fantastic on D, harassing Rudy Gay into one of the worst games in his career by not allowing the Grizzlies small forward to get to his spots.

Speaking of Leonard, the rookie from San Diego State had probably his best game as a Spur. The boxscore can't really show how big Kawhi was on this win. As I mentioned, his defense on Rudy Gay was fantastic even when the bigger Grizzly forward tried posting him up, but Kawhi made his biggest mark on this game by hustling for every loose ball on both sides of the court and showing off his ability to get offensive rebounds. Leonard's shortcomings as an offensive player are well documented, but if he keeps crashing the boards like he did tonight his bad ball-handling and shooting won't hurt the team as much. Kawhi also deflected at least 5 passes on defense and had almost a Manu-esque omnipresence for long stretches of this game. After a bad couple of games it's great to see the rook getting his groove back. He even smiled in the 3rd quarter! 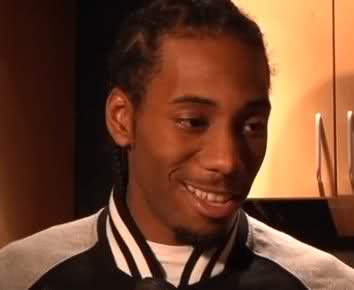 Danny Green was also his disruptive self on D, deflecting passes, pressuring ball handlers and simply being a pest. He did struggle with O.J. Mayo in the second quarter but both he and Kawhi led a Spurs' defense that allowed only .370 FG% and a total of 73 points to a Memphis team that was averaging 94.3 points per game on .452 % from the floor. Part of the Grizzlies offensive woes in this game can be attributed to unusually bad nights from Mark Gasol and Rudy Gay, but make no mistake: the Spurs played some of the best defense I've seen from them in this current incarnation in what could be called a "must win" game, if there was such a thing so early in the season. Kawhi Leonard, Danny Green and Tiago Splitter are providing the length and athleticism that was lacking last season and performances like this one make me believe that the Spurs can become a top ten defensive team if they are committed to it.

PtR's favorite whipping boy, Matt Bonner, also had a good game. The +/- Wizard did it again, this time finishing with a team-leading +21. Matty also hit some big shots: a buzzer-beating, high-arching 3 after what can only be described as an embarrassing attempt to drive to the basket and a banked 3-pointer to stop the bleeding after a Grizzlies run cut the lead to 13 at the beginning of the 4th quarter come to mind. What surprised me about Bonner in this one was his ability to find the right place to be on the secondary break. He had a couple of open shots simply by trailing the fastbreak and waiting for the Grizzlies to hurry back and pack the paint to avoid penetration. He probably does it all the time, but tonight is when I first noticed it. He also had this otstanding quote after the game:

"Firing them up as always. It's all about the shooter's mentality. You treat every shot independent of what happened to the last shot, whether it went in, it didn't go in, whether you banked it in. It doesn't matter ... step in and fire."

As for the Grizzlies, it's clear that the team misses Zach Randolph. With Rudy Gay struggling and Mark Gasol in foul trouble, the team had to depend on Mike Conley, Marreese Speights and O.J. Mayo for offense. That's not going to cut it in the Western Conference. If Randolph is out for the season as was rumored, the kind of home loss they suffered in the hands of the Spurs will be one of many.

Well that about covers it. It's hard to get too excited about a win against a Grizzlies team coming off a 3-game losing streak, missing Zach Randolph and getting a combined 8 points on 3-18 from the field from Gay and Gasol, but this are the types of wins the team needs right now: convincing victories on the road, based on hustle and solid defense.

Tony kept everything copacetic, as Pop would say. He didn't score the ball well but any time the Wee Frenchman has a 10+ assist game, he gets a place on the Three Stars from me.

Winter Shoes hit his shots tonight and had an overall positive influence in the outcome of the game. His timely 3-pointers helped the team resist Memphis' comeback attempts. If he could only play like this in the playoffs.

The rook was everywhere tonight and his aggressiveness on defense seemed to rub off on his teammates. Let's hope he can build on this performance and continues to shine. If he develops a 3-point shot, he could be a franchise cornerstone going forward.

Up next: the Rockets are visiting the AT&T Center. Another win against a division rival is just what the team needs to start the string of 3 home games.