The Grizzlies leading scorer is Rudy Gay at the Small Forward position. He is one of the NBA's top two-way forwards and averages 18.7 points a game along with 6.2 rebounds. Marc Gasol is their center. A rarity in the league nowadays, Gasol plays a true center and averages 15.1 PPG along with 10.4 rebounds per game. He is the defensive anchor in the paint for his team. Memphis is without Spurs killer Zach Randolph.

San Antonio will have their hands full with the Grizz. They will need to find a way to keep Memphis away from the rim. Few teams in the league score as much at or near the rim as Memphis does. Though they are not a great 3 point shooting team, the Spurs were witnesses first hand last year that this so called 'not a great 3 pointing team' can in fact shoot the 3 ball.

The Spurs have two hopes going into this game that will see the Silver and Black pull out a 'W' deep in enemy territory. 1st they will need to rain down 3s on the Memphis squad. Do it early and do it plentifully. 2nd, get their bigs in foul trouble. Marc Gasol is right next to YAWN (Ian Mahinmi) at the top of the committing fouls list for centers. 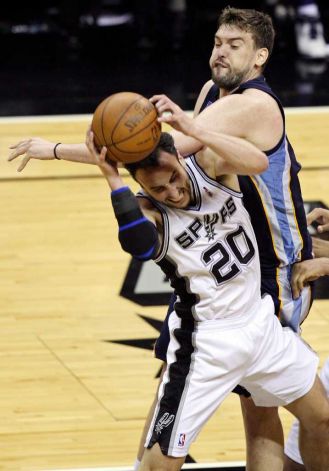 Sigh, Manu knows how to draw fouls on Gasol
via ww2.hdnux.com

Coming off of a disappointing loss in Dallas, San Antonio is still trying to find their identity without Manu.