The Spurs fell just short in an overtime loss to our hated nemesis, the Dallas Mavericks. A loss always hurts, especially to Dallas, but there were many positives to take away from the game. Let's break it down after the jump.

The Spurs came into the game looking for a solution to their difficulties on the road. The Spurs now have a 2-8 record when visiting, but finally displayed some signs of life. This game was a FIGABABA, which turns into a FOGAFINI, and actually closes the week as a FIGASENI since Tuesday and Friday are the only days this week that the Spurs don't play a game. On top of that, the RRT is right around the corner. So, it's extremely important that the Spurs develop their road warrior persona, and soon.

The Spurs began the game in a sluggish way. They looked uncomfortable early and I immediately assumed that this was going to be a painful game to watch. In fact, I stopped watching in the second quarter, deciding that the pain would be lessened if I just checked the score on my phone. Apparently Pop had a similar idea, because he seemed to call it a night by subbing in for his starting five late in the third, with the Mavs up big. That's right, the starters last saw the floor with 2:44 remaining in the third as the Spurs trailing 51 to 67, and finished with a combined +/- of -43.

But just as Pop, as he's often done in this shortened season, attempted to throw in the towel, Danny Green picked it up and threw it back. The second unit came into the game and immediately stole the momentum. It took some time for the score to represent the action on the floor, but the emotion and hustle was evident from the start. The bench cut the Mavs lead to 11 at the end of the third, and proved that it wasn't a fluke by continuing their run into the fourth.

The second unit finished the game with a combined +/- of +38. It felt as if the second unit was on a run the entire fourth quarter. Make no mistake, the Mavericks were extremely fortunate to come away with the win.

In any close game, there are an infinite number of 'What ifs.' Quickly, what if the officials didn't suck? What if they (who apparently have an affinity for spending ridiculous amounts of time reviewing plays) had reviewed the possession before Danny's near game-winner (when over half of a second ticked away after Terry hit his go-ahead bucket) and put a few tenths back on the clock? What if they called a travel on Dirk when he inexplicably picked the ball up while sprinting full speed down the court in an attempt to call a time out? What if they called that ball out on Yawn? What if Danny's three had counted when they called a foul on Yawn as he plowed through Bonner's screen. What if they called any of the many fouls that went uncalled on the Mavericks in the fourth quarter and overtime? What if Pop put a point guard into the game rather than relying on our shooting guards to handle to ball? And finally, what if Pop gave the ball to ANYONE aside from Bonner on the last play? Every other player was having the game of their life. The broken play that sealed our fate really took a chunk out of my life expectancy. But enough of the what ifs. Who does that anyway? I, for one, am above pointing out such trivial matters that definitely stole a victory from our beloved Spurs. I refuse to do it, and I certainly wouldn't dedicate an entire paragraph of a recap to listing them out, one after another.

The bench played outstanding while the starters received some much needed rest, given the rough schedule we are about to face. If we had won, it would have been a win, win, win scenario. Even Michael Scott would have been thrilled with our result. The way in which the Spurs lost makes this tolerable. If our bench can sustain their great play over the next several weeks, our road record will look much better after the RRT.

These two played inspired basketball tonight. Tiago continued his strong play with a solid night of basketball against the Mavericks. His help defense and presence on the boards were huge components of the Spurs' comeback. Eventually, the Spurs will start force-feeding him the ball. He gets high percentage shots every time he posts up. Unfortunately for him, it's been years since we had a dominant post player, and our offense and players are just not used to an interior presence that can score as easily as he can. I think the coaching staff has taken notice of TIago's post game and are just beginning to implement some wrinkles in the offense that utilize his skill. As with any change, this will take time to manifest. If Tiago continues to play well, the guards will have no choice but to give him the rock.

James Anderson played as he did to start his rookie year. Since his injury last season, he hasn't looked like the same guy, until tonight. He looked quick and comfortable on the court. My guess is that he's finally getting into basketball shape. That's the only thing I can think of, because in all his minutes this season, he's never looked like a basketball player to me. He seemed out of place on the court. We'll have to keep an eye on James; I'm not ready to concede any meaningful minutes just yet. But if he strings a few performances like this one together, his play will demand some time on the court. 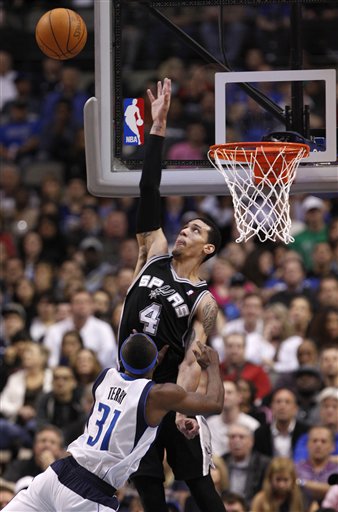 Danny continues to impress. As always, his box score is filled with positive numbers. He is everywhere on the floor. He has that basketball gene that very few are blessed with. His anticipation is what will make him a great player. Pop sees this in him. He has to. I predict Green will become Pop's new favorite player, if he hasn't already. He has that Manu quality that makes him appear to be everywhere on the floor at once. In addition, he is not afraid of the big shot. In fact, he wants to take it. His waived-off game winner at the end of the fourth was brilliant. His missed game-winner at the end of overtime was also special. The play was broken and Bonner was stuck. Everyone just stood, paralyzed in the big moment. Green raced to get the ball from Bonner, picked up the loose ball, ran over a ref, and still got a decent look as time expired. He's a special player and watching him blossom in the coming years will be fun.

Gary was on fire in the fourth and in overtime. His shot is nothing short of sublime. It always has the perfect arc, perfect rotation, perfect depth, and he always shoots it at the perfect angle. Once we get Manu and TJ back, the Spurs are going to be an extremely dangerous team. Right now, we have spot up shooters creating. We have shooting guards handling the ball. We have newbies closing out games. In a month, we will get our veterans back and they will walk onto a very different team than the one they left. This is a team with budding confidence that I expect to be lethal in the playoffs.