On the road again, but not too far from home, today the Spurs visit the defending champion Dallas Mavericks.

There, that wasn't so bad to read, was it? That last part of the sentence took me a while to type, but once I did it, I discovered that the ground did not swallow me up and the earth continued right on rotating as if everything were normal. Who would have thought?

The Mavericks and Spurs currently sit tied atop the Southwest Division, although I am guessing neither team is feeling all that pleased with themselves. The division has four teams tied in the loss column, so there is certainly no breathing room to be had. And neither team has showed many signs of greatness in this first third of a weird and short season. The Mavericks got off to a rocky start, have struggled scoring all year long, lost their anchor defensive center in the off-season, and have their own banged-up star woes. But they are playing pretty well recently, and if they aren't quite playing at championship level, they will be a tough opponent for a Spurs team that is having some consistency issues, especially on the road.

So what should we expect from these Mavericks? Well, for one thing, the Mavs are playing defense. Apparently Tyson Chandler did not take all the defensive mojo with him to New York. The Mavericks are fourth in the NBA in points allowed, and third in defensive efficiency, holding opponents to 94.9 points per 100 possessions, well below the league average of 99.8. Dallas is holding its opponents to 41.8% from the field, again among the top four teams in the league. These are the kind of numbers that might make Pop turn green. How are they doing this? Last year they used a healthy dose of zone and long arms to protect the basket, and this season, although their personnel has changed, the defensive philosophy is similar. Expect frequent sightings of zone, and for the paint to stay very crowded. One area that Dallas is not as adept at is defending the three point line, so the Spurs should find open shooters from distance. Dallas is also getting nearly ten steals a game, so San Antonio must take good care of the ball with good, crisp passes, sharp cuts, and focus. Overall, this should be a match-up of strength against strength, as San Antonio has demonstrated high octane offense with anemic defense in its first twenty games, and Dallas has shown just the reverse. 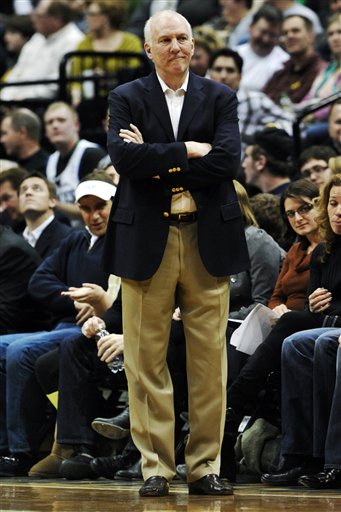 Pop is not impressed with your defense.
via cdn1.sbnation.com

What about offense? Dallas is scoring 97.5 points per 100 possessions, 91.8 points per game, both in the bottom third of the league. Right now, this is not a team that scores a whole lot, and with a Dirk who either will sit or be hobbling, that should continue tonight. (8:05 Update from Jeff McDonald: Rested Nowitzki likely to return today.) Perhaps nobody has a bigger impact on his team's offense than Nowitzki, and several players have had to step to the fore to fill in for the ailing pointmeister. Hosting the Jazz a couple of nights ago, Dallas had a very balanced attack, with six players in double figures. Their leading scorer versus Utah was Rodrigue Beaubois, and a few games ago Shawn Marion had an offensive explosion against his old team the Suns. Vince Carter and Lamar Odom have recently started to shake off the early season rust and have been productive scoring as well, and Jason Terry is still providing his special brand of annoying commentary, childish histrionics, and lethal shooting.

Since the last meeting with the Spurs, the Mavs have played 12 games, winning an impressive 9. The three losses were to the Lakers, the Clippers, and the Timberwolves, three pretty tough opponents. Dallas has also split two close games with the top team in the West, the Thunder. That tells me Dallas is a pretty darn good team. On the other hand, most of Dallas's wins have been against mediocre opponents, and according to Hollinger they have just the fifteenth toughest schedule in the league so far.

Of course both teams are banged up. Dirk Nowitzki is listed as doubtful for this game, and again the Spurs will be without the services of Manu Ginobili or T.J. Ford. Both teams hope for better days ahead as they get healthier and integrate new players into their respective systems. This may not be the most memorable game of this old Texas rivalry, but it should be fun.

UPDATE: Kidd is likely out. Dirk to be a game-time decision.

Game Prediction: If the Mavericks break 100 points, as they have only done six times this season, the Spurs will lose. On the other hand, if the Spurs can continue playing the somewhat improved defense of the last few games, and if they can convince their Young Ones that any game played in Texas is really a home game, then Spurs win a nail-biter.