Share All sharing options for: Spurs 79, Timberwolves 87: Quicker than a Quick Cap 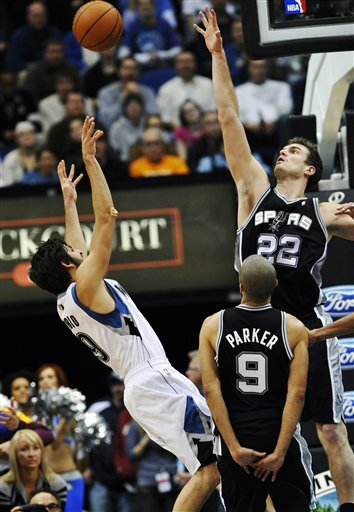 While most of the San Antonio Spurs' fan base are hesitantly preparing their coats and jackets in preparation for the team's impending decline as Tim Duncan continues to age, it is the opposite in the already cold confines of Minnesota. The up-and-coming Timberwolves' increasing confidence are stirring up interest not seen since Kevin Garnett roamed the Twin Cities, and for very good reasons that were in display against an unusually road-weary Spurs team. Ricky Rubio, the Spanish Maravich or whatever ball-handling wizard you can compare him to, not only showed an ability to hang with a great point guard like Tony Parker, but also demonstrated an amazing resolve to win as he created for himself and teammates in crunch time that led to their second win in a row over San Antonio.

As the title says, this'll be as quick and painless as possible. 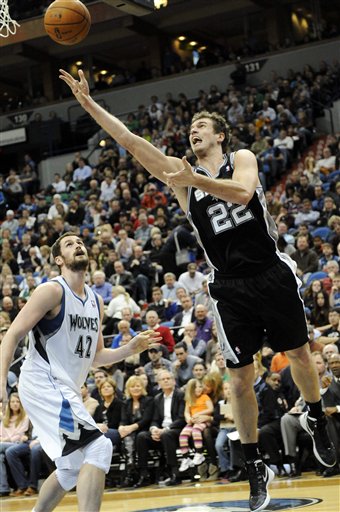 I think this is a good time to use this photo and update that Tiago with ballerinas meme I've seen in game threads.

I was trying to watch the replay of the game and my ISP kept on bogging down on me so I finally threw my hands up in the air, slammed my fist into the laptop monitor, and licked the blood dripping out of my knuckles like a crazed Mayan eating a live chicken as the world is slowly crumbling. Okay, that was probably 99% made up, except for the ISP part. So what I just managed to watch are a few parts of the first and second halves, and some thoughts on the game based on how I was following it on Twitter.

A good buddy of mine and I follow our local hoops scene here avidly, and as we've seen how players have developed, we sort of arrived at a theory about the inverse relationship between putting on muscles - mostly done by hitting the weight room - and shooting touch. We found this to be particularly true with a lot of local players, and we always laugh about it when a previously known deadly shooter suddenly can't hit anything because his biceps and arms have grown too muscular. An accurate shooting big man we regularly play pickup basketball with also confirmed the theory, and said to himself he'll never lift weights again as he'd like to score more than be able to jump or move quicker or even have amazing cardio. The trade-off is real, at least to us lazy bums.

Anyway, what happened in this game was that we traded off our usual high-scoring offense in lieu of defense. Or maybe not. Maybe it was just a case of everybody sucking badly on offense just when it was needed the most. The Spurs shot worse enough to lose, or you could look at it the other way around with the Wolves who made just enough shots. Either way, the sure conclusion here is that defense was not enough.

"Like many NBA games, the last four or five minutes, whoever scores wins. And we scored 15 in the (fourth) quarter. Fifteen isn’t going to get it done in the fourth quarter of an NBA game," Coach Gregg Popovich said. We hear ya loud and clear, coach. One game you could have the worst defensive team you've ever coached, and the next game you'll have a terrible offensive team turning the clock back as if its the pre-shot clock era.

I don't know if it was mentioned in the game thread, but the starters again were unable to do the heavy lifting they're supposed to do, which should supposedly justify their being in the starting lineup. DeJuan Blair, who recorded a fat egg in the points column, makes me really wonder why he's not watching and learning how Kevin Love is able to grab those rebounds even if Love looks like the most unathletic guy on the court. And it's not like Minnesota is an incredible defensive team that DeJuan can't score on their big men. Blair's seen better defense, for sure. How about Richard Jefferson? He scored 10 points in the first quarter in a torrid shooting start, and then alarmingly faded on offense as the game went along. With him and Blair, it's like playoffs have come in January.

I'm a little disappointed how we didn't have the requisite fire to exact revenge on a young squad that steamrolled us in the first meeting. I mean, the Wolves just shot 9 threes in this one and made only 2, after shooting 12-21 in our earlier encounter. K-Love played a below average game, given that he always seems to get at least 20 boards against the Spurs in the past few meetings. Okay, let's just put it on Rubio, he of the ugly shooting the past several contests, getting the hot hand and utterly controlling the game like a yo-yo on a string. We can also blame those refs who swallowed their whistles while Nikola Pekovic gladly displayed over and over the not-so-glamorous art of a moving screen. Pekovic who? Yeah that's right, he didn't even play in the first game.

You know, I should stop feeling disappointed in losses like these. This is a much different T-Wolves team being led by a budding superstar and a Rookie of the Year candidate, while the Spurs are anchored by a rapidly aging legend whose best games are becoming fewer and farther in-between, and an elite point guard who has had to carry all the offense including Blair's lunch pail. Oh yeah, we also don't have our best player in Manu Ginobili, can't forget about that.

Still, it's hard times and I expect it to continue to be this way, especially on roadies during LWMAT. At least I can continue to watch Tiago Splitter play exceptionally well, and then suddenly pull my hair out whenever Pop decides to not trust him enough to run the offense through him when everything else is bogging down. Yep, we'd just have to continue to deal with these feast or famine Spurs. Now, where's that fan confidence poll...

3 - Matt Bonner --- Only because he played better than most of the starters, and he hit his threes. Atta boy, Matty.

Up next: @Dallas Mavericks. Just our luck, I hear Dirk's coming back from his rest and conditioning. Get your drink ready, it's gonna be a long night.