Are the Spurs giving up too soon on young talent?

Share All sharing options for: Are the Spurs giving up too soon on young talent?

Yesterday was the deadline for picking up team options on players on their rookie contract and it appears that the Spurs have decided not to secure the option for second year swingman James Anderson. This might not seem strange considering Anderson's inability to crack the rotation even with Manu Ginobili sidelined, but it is, in fact, very rare for teams to decline their options on first round draft picks.

Most teams keep those young players, even if their production doesn't match their potential, because their contracts are cheap and they might still develop over time. Even the biggest busts seem to get that extra year to prove that they belong on the league. And then there's the Spurs.

The Spurs have gone the draft-and-stash rout for years That is, if they even had a first rounder. At the peak of the championship wave, the Spurs were not particularly interested in bringing in rookies that couldn't contribute right away. In the 2005 NBA draft, the Spurs drafted Ian Mahinmi, with the intention of keeping him in Europe to develop. In 2007, the French center made his way to the States. Yawn was considered a good physical specimen with significant potential, but who was still very raw. After almost two years of not being able to get playing time because of foul trouble and so many experienced players in front of him in the depth chart, PATFO decided to cut ties with the intriguing 6-11 center and focus their attention elsewhere. Mahinmi went on to sign with the Dallas Mavericks on the cheap for two years and displayed some of the same problems he had with the Spurs in his first season with them. This season, he has found ample opportunities for playing time due to Tyson Chandler's departure and Brendan Haywood's ineffectiveness. In his 4th season in the league, Mahinmi is contributing substantial minutes to a team that has the third best defensive rating in the league.

Why am I bringing up Mahinmi? Because I think he exemplifies the risk a team takes when it does what the Spurs have been wont to do: give up on young players so soon. If you don't contribute from the get go, the Spurs are not interested in waiting for you to figure it out. As a result, the player the Spurs scouted, selected and developed, is now playing for their division rivals instead of strengthening their weak frontcourt. Now consider James Anderson. The Oklahoma State product hasn't exactly shown very much in terms of production in his NBA career, but he hasn't had a chance to either. He's never had a full training camp or summer league. Despite that, he was still doing just fine his rookie year until an injury caused him to miss most of the season. His shot has abandoned him this season, which has resulted in him being buried deep in the bench. As hard as it is to think that a guy who was such a good shooter in college can forget how to score, that's what seems to have happened to James. He's shown flashes of decent playmaking and his defense has been solid in the amount of playing time he's been allowed, but he hasn't dazzled anyone.

The problem is that I think it's hard to gauge Anderson's progress after nothing more than an injury-truncated rookie season and the few games he's played this year. The player the Spurs thought they were drafting - that dynamic scorer and willing defender - might still be in there somewhere. Under different circumstances, I would be the first to say that Pop knows a lot more about him than us, since he can see him in practice, but with the shortened season, practice time is almost impossible to find. That's why I'm having such a hard time figuring out what could have motivated PATFO's decision. Anderson still has latent and unexplored potential and is set to make a little over $1.5 million next season. Why prepare to let him go?

In a recent article, Buck Harvey thinks he has the answer: the Spurs think Danny Green is their wing of the future, not Anderson. I can't say I disagree with that. After all Green is a more complete player than James and one that can produce now, while still being relatively young. But I do have some questions:

1 - Why can't both be on the same roster? The Spurs have a lot of wings this season, but going forward they have a often injured and aging superstar in Manu Ginobili, an undersized shooting guard in Gary Neal, a shoe-in for the amnesty clause next season in Richard Jefferson and two young players who still haven't demonstrated that they can sustain their level of play. Unless Anderson asked the team to let him go or complained about his role (both possible scenarios), why not pick up his option and send him to the Toros? Why not keep Anderson for another season to see if he blooms? It's always possible to cut ties with him later if he doesn't develop as expected. Thinking about the future, wouldn't a rotation of Green, Kawhi Leonard and Anderson be better than one that features the undersized and defensively-challenged Neal?

2 - Why not try to get something back for him? In that same article, Harvey goes on to say that according to his sources, the Spurs looked for trade partners to deal Anderson but couldn't find one. Guess what? By not picking up the option, the Spurs have effectively killed any trade value he might get as the season progresses. If his stock was as low as it can be, why not wait a little before deciding against keeping him? He could've shown something in limited minutes that might have made a GM think he was worth the late first rounder it would take to get him. Now that scenario is practically impossible, since most teams would be much more willing to gamble on a young player with an affordable rookie contract that has two more years left, than a guy who will be an unrestricted free agent. If no one offered anything and Anderson didn't show improvement going into next season's training camp, the Spurs could have given him up for free to a team with cap space.

3 - What if Green continues playing well and gets a big offer from someone else this off-season that the Spurs are unwilling to match? If Danny continues to impress, a lot of teams will come knocking for his services. While the Spurs have a logjam at the wing spot this season, if they can't re-sign Green next season that won't be the case. And if the Spurs decide to use the amnesty clause on Jefferson? The rotation would consist only of Manu, Neal and Leonard.

4 - And what if Green can't keep up his level of play? He's been playing great and is showing great all-around skills that have some people comparing him to Manu. The problem is, he has never showed that he could play like this before. We are basing our projections on a ridiculously small sample size. Putting all the team's eggs in the Danny Green basket seems silly, especially when there's another young, talented wing on the roster that could be retained on the cheap in Anderson.

If Harvey is right and the Spurs didn't pick up Anderson's option because of Danny Green, that would be crazy; I don't think that's a valid reason. But after trying to come up with other explanations as to why they'd do it, I still can't think of a better one. I hope PATFO has one. Because a team that is about to transition from perennial contention to rebuilding mode, can't afford to lose one of its young pieces for nothing. Not every developing player shows his worth from the get-go, like George Hill and Leonard did. As Mahinmi shows, some need a little more time to develop.

It took years for most Spurs fans to get over losing Luis Scola. And now, it's only the amazing play of Tiago Splitter that has managed to calm the most fervent of Yawn's fans. Adding James Anderson to the list of players the Spurs gave up on before they should have, would be devastating not only to the fanbase, but potentially for the future of the team. Gone are the days when San Antonio was a even a semi-popular destination for veterans chasing a ring. The development of young players is of paramount importance for the Spurs' future. It's time to see the projects through. 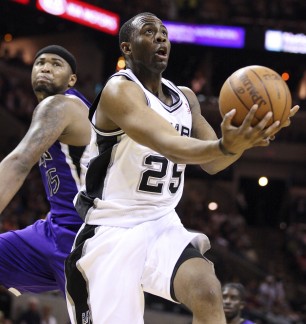