Until The Sun Sets...

Share All sharing options for: Until The Sun Sets...

A thought came over me as I watched the Spurs pull one out over the Hornets the other night. I kind of toyed around with it before placing it on the back burner out of the necessity having more to it than simply being a thought. After last night's game against Atlanta, however, I decided that I would rather have this be as short and sweet as I could possibly make it, and have some of the long-windedness I usually tend to replaced with the essence of the truth that surrounds the matter as I see it. To be perfectly clear, it wasn't even the game itself that returned the thought to the forefront of my mind; it was merely the write-up of the game on ESPN's site.

The write up was plain in its offering, the rote recitation given the premium over descriptor, as is often the case with a recap. What stuck me though, was the particular bit of information that the Hawks had not beaten the Spurs on the road since Tim Duncan had been drafted in 1997. Like I said before, that little bit of information was all it took to bring everything tumbling back to the center of my attention.

When I watched Duncan play against the Hornets the other night, everything about it seemed so vintage (so truly a representation of the player he will be remembered as) that I instantly compared its sighting to the sensation I got as a child when my parents told me it was ok to stay out and play for a few minutes longer -- until the sun set. Seeing that performance, complete with the game winner so appropriate in its relative awkwardness in contrast with Duncan's style, and then coupling it with the Hawks tidbit a night later reminded me of how special the past 14 years have been, and how this ride will soon be over.

To me, Duncan represents, above simply being my favorite player, the bridge between the gap of childhood and adulthood. When I began following him, I was still young enough to look up to athletes without the cynicism and jealousy that tend to accompany such thoughts as an adult. In short, he was one of the very last childhood heroes I had the privilege of having. Watching his performance stand out from amongst his ever declining norm was something that made me happy and sad at the same time, the same way those few extra minutes of playtime in the evening brought joy to the reality of my impending bedtime years ago. 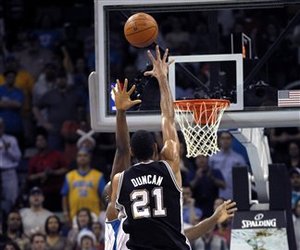 I feel like I'm in the minority, in that I believe this will be Duncan's last season, although what I saw the other night made me think that perhaps I'm only telling myself that so it won't hurt as much when he finally does hang them up. The fact remains that the performance the other night has become more exception than rule, and that the impending reality is that what we see is what is left, and nothing is being saved for the playoffs as we've so often assumed and been told. The sun is beginning to set, and we have to make the best of the few moments we have left in it.