State of the Spurs- Robinson, Duncan, Splitter and Blair

Share All sharing options for: State of the Spurs- Robinson, Duncan, Splitter and Blair

This is the second installment of my weekly series looking at the State of the Spurs. I like to write about trends I see, statistics, make predictions, and say all sorts of things that make sense to me that you may or may not disagree with.

My theme for this week:

Tim Duncan cannot move to the David Robinson role, and neither Tiago Splitter nor Dejuan Blair are going to be the new Tim Duncan.

This is not going to be, I'm sure, a popular sentiment. David Robinson and Tim Duncan are two of the 50 greatest players of all time. Duncan is the greatest power forward of all time (GOATPUFF, if you will) and Robinson, depending on who is listing them, ranks as at worst a top 10 center ever. We were beyond fortunate to have them both at the same time. You cannot replace them with even the best late-round draft picks. It's not possible, or at least not probable.

Everyone who's read much of what I've written over the past year or two knows I'm a huge Dejuan Blair fan. After his great rookie year, I was predicting he'd end up averaging Charles Barkleyish numbers. I didn't think 18/12 was out of the realm of possibility. And, honestly, if he played for a coach like Mike D'Antoni (I use the term "coach" loosely) where the primary play was pick and roll with a pass first point guard, he'd probably come close. Fortunately, he doesn't play in a horrible system like that. He plays in ours. And, for the most part, he plays well. He will likely average just short of a double double this season- 12/9 is reasonable. For all his flaws, he is still more good than bad. But...he is not a top 50 of all time player. I don't expect to get much argument about that. In all likelihood, if you wanted to name 100 centers from history, he might be in the top 50-75 of that position. That might be a stretch- I can't name enough historical centers to know. What I do know is that he's improved, even if his stats don't necessarily show it. His free throws look better. Actually, all of his shots look better, even if some aren't falling. Personally, I don't have a problem with him making a mistake or two on offense due to over aggression. Last night against the Hawks, and the game against the Rockets, he made several bad decisions. Too many. But he's a third year pro who only played two years in college- this *should* be his rookie season. That's not an excuse, that's just a point to make for perspective. He's not a 27 or 28 year old vet. Blair is still learning exactly what he can and can't do- much like Danny Green, Cory Joseph, James Anderson, and Kawhi Leonard. 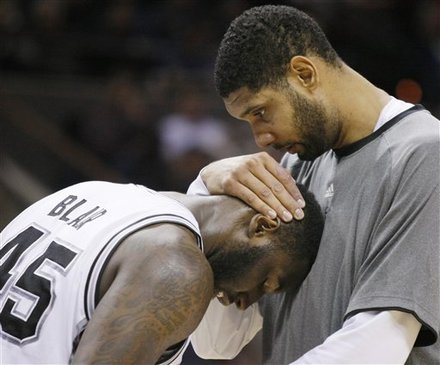 Take shelter in my Bosom, Dejuan, and ye shall find rest

You're tired of me talking about Dejuan- I can see the same glazed look in your eyes that Dejuan gets when he thinks of Whataburger, although what's going through your head is not quite the same. So lets talk about who everyone wants to talk about- Tiago Splitter. He is, right now, our first, second, or third best big man, depending on the night. Usually, (I'm about to blaspheme) he and Dejuan actually outplay Tim Duncan. Tiago is finally showing us everything we wanted him to show us. He is absolutely full of all the sparkling glory that everyone here says he is. Stats back it up, we all see it, there's no real point arguing about it. He's good. Real good.

But what he is not is the next Tim Duncan, and we should not expect him to be. Tiago Splitter will likely never be a top 5 PF or top 25 center, however you want to classify him. He's athletic enough to be in the NBA, but he's not the athlete that Duncan and Robinson were at his age. People forget- our Big Fundamental was also at one point a "fun big" by anyone's standards, capable of dunking over anyone. Robinson was an athletic freak.

He was able to move over and create space for Tim because that was the only way it would work. Duncan can't move over now because we don't have a replacement for him- and barring a big shock for a trade, a free agent, or a lottery pick, we won't get one, either.

This isn't all doom and gloom- the most enjoyable basketball the past two seasons, for me, has been watching Splitter and Dejuan play together. For having such similar skill sets, they mesh well on both ends. They both screen well, and they are both really good at finding space around the basket- they also both find each other around the basket. Interior passing is the most beautiful thing in basketball for me.

That's enough on that topic for now.

Bonner is finally shooting again, and after last night I think he'll be back on track.

Richard Jefferson hasn't completely disappeared, but he's close. It's kind of like looking at a "Where's Waldo" picture- you know he's there somewhere, but you sometimes have to look to find him.

Things I think will happen:

Danny Green will be the second leading shot blocker on our team. He'll also average the most steals, and he'll continue to get significant playing time once Manu and Ford come back- meaning even less time for Neal and Anderson. If he continues to get close to 20 minutes a game, he'll be a good sleeper pick for 6th man of the year or MIP, one or the other.

Things I'm going to watch for:

Will Malcolm Thomas stick, or is our experiment with him nearly over?

Which lineup gets more minutes together- Duncan/Splitter or Blair/Splitter? I like both.