Share All sharing options for: Manu and Borges: The Infinite Chase, Part II

Editor's Note: Yesterday, we posted the PtR debut of DewNO, Part 1 of Manu and Borges: The Infinite Chase. If you haven't already checked it out, please do so in order to fully enjoy Part 2 below. I can't tell you how excited I am about DewNO's writing for our fair blog for what I hope will be a long time. If, like me, you just can't get enough of his writing, you can see more of his work at GothicGinobili.com and read anything by Alex. - JRW 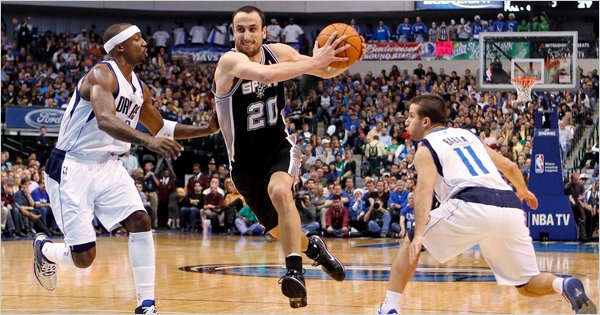 The San Antonio Spurs' Manu Ginobili is a statistical freak: he has no imbalance whatsoever in his game - there is no one way to play him that is better than another. He is equally efficient both off the dribble and off the pass, going left and right and from any spot on the floor.

If being chased off your spot is one of your spots (as this quote more than suggests), then there's a natural follow-up, (since that thought has a brother) can you then be chased off that spot? What would that even look like? Would that be a second defender swooping in the way of a strafing Manu on his dribble, trying to draw a charge or to force Manu to make yet another choice or misdirection? Is that second chase one of Manu's spots too, now weaving through defenders, using a busy tangle of purposeful bodies against itself? And if that's a spot, what's being chased off of that? Is it penetrating and curling - with sinewy strength - around a shifting, Twister-esque labyrinth of limbs and finding the single hole in space and time within which can fit a basketball and from which Manu can reach his man in the corner for an easy three? While I couldn't keep this line of description going for more and more levels of defense, I'm sure Manu could, and if we knew when to look we could see it ourselves. And that's special. That's a story worth telling. But if you've watched the Spurs for long, then you don't need me to tell that story because you have seen Manu. So all I can do is to tell you to dig up your own shoeboxes and open them with a fresh set of eyes.

And, in the spirit of Borges, I ask you to try and imagine how you think Manu would do in a chase of Borgesian infinity, in which infinite streams of corporeal ghosts emerge from the stanchions to chase Manu off any tiny spot of comfort he can conceive. And then we can ask where he is after all of that. Tell the ghosts to overplay. Give the ghosts all the fouls there are to give. Tell them to stop Manu from scoring. Now, there are mathematical sequences that go down forever until they reach zero at the end of the line. Multiply Manu's efficiency by, say, 90% for each additional defender: 90%, 81%, 72.9%, 65.6%, etc.: Tell each ghost, in other words, to use its body and mind to make it 10% more difficult for Manu to score. That's pretty reasonable, and if it's true, the ghosts would eventually get Manu to the point where his scoring is more fluke than purpose. But that can't be it, can it? Because that would be Manu defeated. Maybe you've seen Manu defeated. Maybe you can imagine a Manu whose scoring is more fluke than purpose, but I can't. I don't think I'm just being unimaginative or dense: I just don't think I've seen him truly defeated in such a final sense. 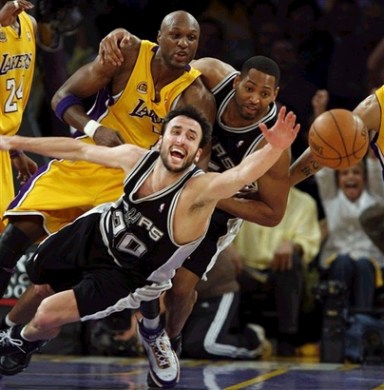 So I have to think (despite the swarms that would try to constrain him) that Manu would find a move, and then another, perhaps a dive like an escaping convict seeming to go cartoonishly through the barbed-wire fence except in slo-mo replay. By the end of the whole exercise, I think he would have made a basket, say, 40% of the time. It wouldn't be Showtime, but it would be good enough to put him in a position to win, which is all I suspect he cares about. And, no matter how talented those ghosts are at man defense, no matter what the rip-through rule looks like in that league, at some point he'd simply topple the shades by drawing an infinite sequence of blocking fouls and - even starting with infinite fouls to give - Manu would end up shooting free throws until the end of time. There are different sizes of infinity, after all.

Yes, there's a precedent for slowing him down for a night or two (at least for a few quarters), pushing him into a slump, or getting him injured. It's not impossible to impede his progress. But I don't think you'd ever stop him completely because you couldn't figure out even one defensive angle (or even an infinite contour of defensive angles) that would do him in. After all, we've all seen the crpytographic defenses swarm him - sometimes four or five levels deep - only for him to find a way out. And - after approximately 43,000 times down the court on both ends - we've probably seen how the advanced statistics tell us that he solves the labyrinths as well as anyone else -- maybe ever, given what his framework should allow. Manu Ginobili is the ultimate human cheat code, the password to the rim. And since solving these problems is such an essential part of his skill, I really don't think he'd be too much more uncomfortable in the room of ghosts where he'd have to solve a few defenders even to move a single step. It wouldn't be his favorite spot, but he'd make it work.

Now, don't get me wrong: Surely defenses do hurt his efficiency as opposed to an empty gym. In an empty gym, with no one to stop him - Manu Ginobili would be nearly as fast and efficient to the rim as any of the great athletes. He's not unathletic, even if his athleticism isn't jaw-dropping, and he's not lacking in fundamental, non-cryptographic skills. I'm sure without any obstacles, Manu could bounce-pass a ball through a hoop aflame (for no reason) less than 20 inches across, from 40 feet away. I'm not so blasphemous to call him a sort of demigod or Greek figure that gets better and better the more people you throw at him to stop him. But to the extent that he gets worse and worse with every human obstacle he faces, well, he seems to get less worse than anyone else, and the sheer size of his comfort zone and the malleability of his spots (shooting and passing) are perhaps rivaled only by another shooting guard a few states over and a certain pockmarked-looking German power forward. Yet - without denying their greatness - I have to note that neither of these players has to wind through a defense consistently, neither of these players has a team so dependent on Manu's unique capacity to distribute, and neither of these players have to solve more than one or two chase-offs at a time and emerge nearly as efficient. 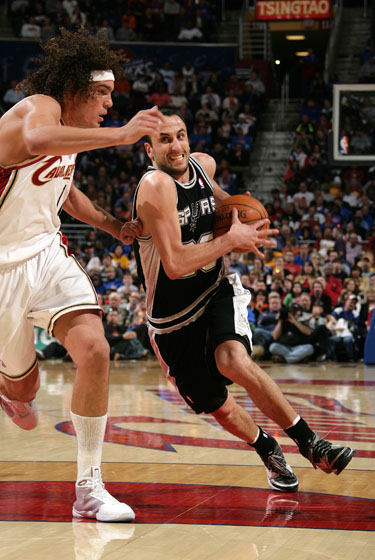 You can force Manu to take bad shots. It's even possible - depending on the phases of the moon - to convince him to launch a three from contortions that make even Manu subject to chance. And he does miss sometimes. But you can't chase him off his spot, because he has only one. His spot is basketball itself, and chasing him off his spot? Well, you can try your hardest, but the chase is also going to be basketball (a little trickier, certainly) so he's going to handle it pretty well. Don't blame yourself.

For my part, I'll be keeping my laptop under my bed from now on. And - as soon as Manu is healthy, at least - I'll open it up whenever I want to watch a slithering struggle by a Borgesian narrator to escape his personal version of Babylon, 48 minutes at a time (or, more realistically, 22 minutes, given that Pop will consider anything more to be... extraneous Ginobili).

In 1945 I realized I was going blind and could no longer write or read. Then I thought "I will feel sorry for myself and that is sad. I must fill my life with something different." Yellow is a color that has been with me all my life, now it is the only color I can see clearly. On the other hand, I've lost other colors: above all, the color that all blind people lose but which others do not understand, the color black. They just assume that blind people live in darkness. That is not true. They live in a sort of mist, blue, green, or yellow.

Borges - for about half his adult life (Wikipedia says from 30 to 58) - was slowly going blind. But through the impending sightlessness, Borges kept working. He found people that could help him read when his sight was weak, and he kept writing the stories that would outlive him. Mortality immediately brings to mind sadness and sympathy, but all I can find in Borges is a joyful love of life, no matter how difficult. After his blindness was full, he still went on tours and dictated lectures to students at universities around the world, and these (still quite terse) lectures were transcribed. He learned Anglo-Saxon with a reading group of college students. And then, some thirty years after his blindness was total, he died, as creative and as well-spoken as ever. I don't think that blindness caused the sparkling imagination of his latter poems and lectures. I think that's one of those things we tell ourselves to ennoble the afflicted, to fix in our minds a broken window to their soul, to justify our own missed opportunities. No, I don't think it helped him, but I think blindness hurt his imagination far less profoundly than it would have for just about any other writer or poet. He knew that his sight was going away, and he held on to what he could with an exceptional memory and a deep awareness of his blessed mind.

No one should read self-pity or reproach Into this statement of the majesty Of God; who with such splendid irony, Granted me books and blindness at one touch.

I know that Borges and Manu are important figures to their fields and their countries. I know the robustness and depth of their accomplishments speak for themselves. So it's kind of absurd fandom on my part -- really, not much different from the silly fanfics I write from time to time - when I make a specious extension to infinity of a cutesy concept that isn't really well-defined to begin with. Imagine that: a room of infinite defender spirits, unsuccessfully guarding Manu. It's absurd! You can tell me so; I won't be offended.

You can tell me about all the things in life that will try to chase us off our spots and bring us to ruin, and that usually these things will succeed, and that in the long run we'll find we never had a chance to begin with, as age or despair or blindness or prejudice or death or whatever sets in. You can tell me this. Heck, even when you succeed for a moment, you can step back and see the loss to come, and you can tell me that the chase can never be rationalized away as a positive good. Okay. I won't disagree with you, and I'm sure you mean well.

But when you do remember Borges, maybe you can at least grant me that there's a precedent for swarms of endless spirits of ethereal yellow that try to chase us from our purpose and falter before our genius, as we find to our astonishment that we can still function, and even thrive within the chase. 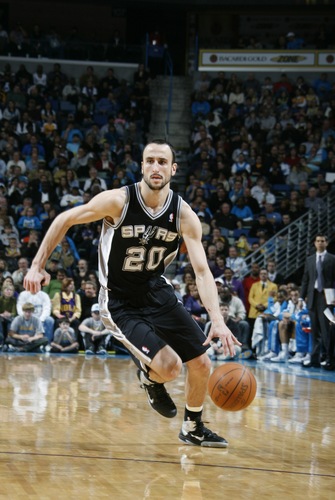