As the Spurs come off of their 2nd road win of the year and first win in the last four games they get to face a high flying Hawks team that is playing well. The Hawks sit at 13-5 and have acquitted themselves well this season despite being with out Kirk Hinrich and losing Al Horford for a large chunk of the year. They sit atop the Southeast Division ahead of both Florida teams. The question for this game will be if the Spurs can shut down the high scoring offense that Atlanta brings to the table?

The Spurs will be tested tonight after getting bailed out by the GOAT PUFF in the Big Easy. Atlanta is 6th in the NBA in scoring and 7th in points allowed. Much like in years past they're big and athletic. The Hawks are a pretty balanced team with 4 players averaging double digits and yet nobody averages over 20 points per game. Joe Johnson and Josh Smith are their two biggest weapons, but Jeff Teague and Marvin Williams are no slouches. Last year the Spurs won both match ups fairly easily, but I wouldn't discount this Atlanta team. They appear to have matured a bit. Their coach, Larry Drew, ripped the team for it's play in a loss last week. Instead of pouting about it, they went out and won their next game by 27 over a hapless Cleveland squad. 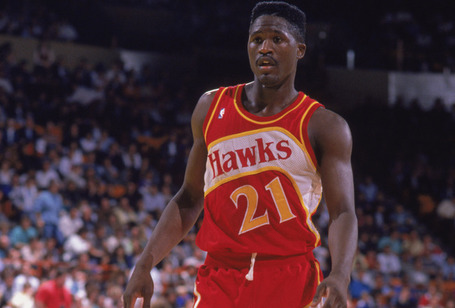 The Original Human Highlight Reel. My Favorite Hawk of all-time
via dberri.files.wordpress.com

After seeing Duncan and Splitter get some burn together there is yet hope that a new set of twin towers can emerge to lead the Spurs yet again. That said, Blair has had some good games against the Hawks. In last year's first meeting the smallish big man racked up 16 points, 12 rebounds, while getting 3 assists and 4 steals. In the second encounter Blair was limited to 13 minutes of play, but still got 7 points and 5 boards. Of course, that was near the end of the year when Pop had decided Antonio McDyess was going to get the bigger minutes*.

*This makes one think that Pop might be leading into the same type of scenario this year. Start Blair for a large portion of the season and then develop a better defensive lineup with Splitter later in the year and into the playoffs. Time will tell, but it would be the same thing that happend last year.

Overall this game is going to come down to execution and who can do it better. Both teams rank in the top 10 in FG% and both are very good 3-point shooting teams. If the Spurs are going to be able to overcome this Hawks squad they will need to play solid perimeter defense and funnel all the penetration to their big men, and by big men I mean Duncan and Splitter. Also, Atlanta doesn't have the deepest front court, especially after loosing Horford. I wouldn't be surprised to see the foul count play a big role as both teams will be looking to set up the long ball with penetration.

It looks like the Hawks will get Kirk Hinrich back against the Spurs tonight. Hinrich has yet to play a game for Atlanta and will only help them as they try to make a deep run in the playoffs. The Hawks have a couple members of the 2000-2001 All-Star Team anchoring their bench. It's ok, I didn't realize Jerry Stackhouse was still alive either and I just barely remember T-Mac playing something like basketball last year. Along with Jannero Pargo and Rad Vald Radmanovic, this might be the most pure chuckers on one bench ever. I'm not sure any of those 4 have seen a shot they didn't like. Talk about volume shooting, wowzer.

Speaking of benches, the Spurs role players need to improve. Outside of Green and Splitter, San Antonio's role players haven't been helping the cause as much as will be necessary. RJ, I'm looking at you. I know it's easy for me to pick on Rage, and he even had a decent game against the NOOCH, but I need to see more. You're getting paid as an elite, or at least semi-elite, player. Show me some of that early season agression on defense and keep hitting those open looks from deep. RJ's defense will be a big key tonight as the Hawks boast a lot of talent in the form of guys that play the 2/3/4. I'm hoping to see Rage tonight and not Princess Peanut.

Before your song of the day, let me just say that I'm glad the game isn't in Hotlanta where the players play and they ride on them things like every day. Here's your song for the day:

On to the lineups:

Game Prediction: Spurs win it in a squeaker.