Share All sharing options for: When Pop Says "Enough"

In DrumsInTheDeep's most recent (and most excellent) Pop Culture Lesson, a conversation began in the comments about what would happen if Pop ever lost "the team in Sloan-like fashion." This query caught my eye and made me put down some thoughts that have occurred to me over the last several months. 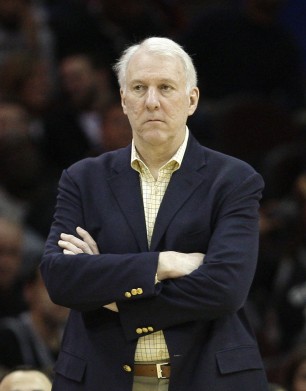 Like I'm even anywhere near to being done with this league.
via blog.mysanantonio.com

Last year, before a road game against Golden State, Pop gave a lengthy interview to Greg Papa (who used to do play-by-play for the Spurs TV broadcasts) in which he was as open and relaxed as I've ever seen him on camera before or since; I'd even use the word loquacious. (That is not, for those who've never stood among the gathered press as the coach entered the room to talk about a recently ended game, a word that leaps to mind when thinking of Gregg Popovich and the media.)

I don't know why he was so at his ease, nor do I feel like speculating about it (actually, I do quite feel like it, I'm just exercising my better judgment) but during the course of questioning, Pop alluded to the "I'll retire when Duncan retires" statement and talked about how he had moved on from feeling that way. After Jerry Sloan abruptly retired last year, a reporters asked Popovich before a game whether he could see his own career ending, and Pop stated that he wants to keep coaching for as long as he still feels passionate about doing it.

So (mikrobass3, here's my answer to your question) if he finds himself in a position where he has "lost his team" - then I expect that he'll be that much closer to no longer having the drive to continue the grind. I'd actually hazard a guess that such a case would only come from him having already lost his passion. A coach like Pop who can choose his team through his closeness to the GM, and who cares as much as he does about the character of an acquisition as he does his skill-set, a man like that won't lose a group like that, unless he's already checking out himself.

I don't think the likelihood of that happening is very high, but if it does occur, then I see Pop taking a different route than Sloan. He'd finish the season as best he could while letting Holt and company know his plans. Then after the season, with as little fanfare as possible, he'd retire.

Lately I've been thinking about Danny Green and Manu as being the main shooting guards once LWM ends. And since Mean Joe already shows signs of being able to have a bit of the Manu-sight as far as court vision and play creation are concerned - not to mention back-side steals, when to leave your man to block a shot from out of nowhere, and that kind of stuff.

And I've really been geeking out every time I think about Manu approaching Danny during practice, or pulling him aside during a game to walk the youngster through his thought process of attacking certain defenders, dealing with this kind of defense, reacting to a hedge like that by using this dribble and watching for a cutter from this direction which you could hit with this kind of pass after making that kind of fake and a head juke like this while looking away like that.

And while I've been tiring out those members of the PtR staff that have had the misfortune of being signed into their Google accounts during a game (sorry, silverandblack_davis) with little imaginary tidbits about how Manu is actually (a la PEN's Ginobili vs Dracula series) controlling Green during Mean Joe's time on the court. And while I've been attributing any missed shot or turnover to Manu's unfamiliarity with precisely how to best control him, I've finally decided to revise my expectations our young Greensleeves down, albeit as slightly as I can.

While Green's coming out party against the Nuggets (24 points in 33 minutes on 9 of 13 shooting, 3 of 3 from distance, seven rebounds, two assists and two steals) was certainly an eye-opener for guys like me who didn't really expect much of him coming into the season, that line doesn't seem to be anything that we're going to be able to expect from him for a good while.

So, to anyone else who's been waiting for Gruene to explode again every time he takes the court (or at least to put up some eyebrow raising numbers again) let's just agree to take a breath, have a soothing drink, and enjoy watching the kid as he develops at his own pace, bad passes, missed rotations, ugly drives and all.