Well, how do ya like them apples? This is two games in a row that I get to preview against a once prominent Western Conference foe. As of the time of this writing, we escaped from the state of Florida with a 50/50 split (a big loss against the Heat, and an OT squeaker against the Magic), a home loss against the Kings on Friday, and another loss on Saturday night in Houston. Tonight we get our first look at the New Orleans Hornets, a team that has fallen on hard times, as of late. It’s no secret that our Spurs have been bitten by the injury bug and have been a bit sluggish at times, but hey, we could be the Hornets.

I mean this in the nicest way possible, but the cold hard truth is that New Orleans' fate this season was sealed before Christmas Day. The team is bankrupt, the NBA is still trying to sell them, and they more than likely would not have been able to keep all world-er Chris Paul. He had one foot out the door, no matter what face he put on for the media. After two plus seasons of speculation, on December 14th he was traded to the Los Angeles Lakers Clippers. In exchange for Paul and two second round picks the Hornets received Eric Gordon, Al-Farouq Aminu, Chris Kaman and a first round draft pick. Oh, and they also lost David West via free agency to Boston Indiana, too. 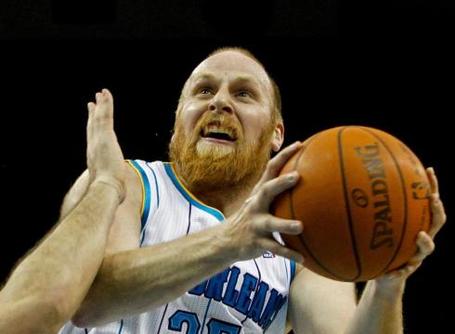 The Caveman is in the Big Easy
via i.usatoday.net

Needless to say, the new players have struggled to mesh, and the team has sputtered to a 3-12 record - dead last in the West...-ern Conference, that is. Alright, that wasn't very nice. It's not to say that they haven't been in games, but losses are losses. They beat the both the Suns and Celtics to jump out to 2-0, but followed with six straight L's, then a W in Denver, and most recently 6 more L's a row. The Mavericks, Spurs, Thunder, Magic, Hawks and Heat will prove a tough row to hoe coming up as well. When it rains it pours, eh?

As of Friday, the Hornets rank 27th in points per game (86.7), fifth in rebounding, 24th in assists (18.5 per), and eighth overall in points allowed at 91.7. Our Spurs are currently fourth in points per game (100.6), 22nd in rebounding, second in assists (23.5 per), and 18th in points allowed at 96.1. Eric Gordon played on Wednesday, but reinjured his knee and is slated to miss about two to three more weeks, making New Orleans without its leading scorer tonight. On the boards they do not have a player averaging more than 8 per game, but two players over seven (Okafor and Kaman) and a third over five (Ariza). We have two guys pulling down more than six per (Duncan and Blair), and a third over five (Leonard). When it comes to the dreaded free throw shooting statistic, as a team, the Hornets are 16th in the NBA at 74.5%, while are Spurs are holding down the fort at 25th, shooting 71.7%. From the field our 47% (fourth overall) beats their 43% (21st overall). If all goes according to plan, we have the edge from down town as well - our 39.9% (third overall) to their 26.5% (third to last).

Thankfully, our guys had Sunday off. Tonight will be our third game in four days, and New Orleans' second in three. Our experience and a day off should give our regulars a chance to rest, but with these Spurs you just never know. Sometimes our guys insist on doing things the hard way (see: Heat, Miami and Magic, Orlando). This game could be a trap, and in order to avoid that, we must put it away early. We have New Orleans on the road tonight, off Tuesday, and then home to SA to face Atlanta on Wednesday. We'll need our guys nice and fresh for the Hawks who will have played Philly on Friday, Cleveland on Saturday, and Milwaukee on Monday (three possible wins in a row for them, coming into SA).