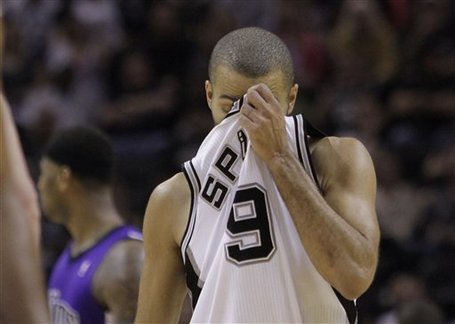 Doing the faceshirt instead of the facepalm seems more hygienic.

So after one streak ended the other day, another streak was put to a halt tonight and it wasn't one that made you feel good. The Sacramento Kings, early leaders for most dramatic locker room of the year following DeMarcus Cousins' sophomore exploits, tarnished the San Antonio Spurs' unbeaten home record with an 88-86 escape. Led by the slashing prowess of former rookie of the year Tyreke Evans, the Kings put together a decisive run in the fourth quarter to notch their second straight win. Meanwhile the Spurs, after briefly getting a taste of the lead in the last few minutes, will head for the second game of a back-to-back in Houston with no time to ponder about this latest disappointing loss, as wave after wave of sloppy basketball come at their tired, weary bodies.

A very brief summation of the game, after the jump.

Given the bizarre nature of this compressed season where the Philadelphia 76ers are leading the pack out of nowhere, the league-worst Washington Wizards just recently pulled the rug under Western Conference favorite Oklahoma City Thunder, and the Boston Celtics are hurtling downward faster than an avalanche, I'd prefer to keep an even keel in the face of losses as tough as this one. Having said that in midst of an uncertain season, this much I am sure of:

This team is not a contender. At least with Manu Ginobili and TJ Ford out for the extended period. So, I think some tempering of expectations is in order before fan confidence falls apart like ice cream melting under the intense gaze of summer. 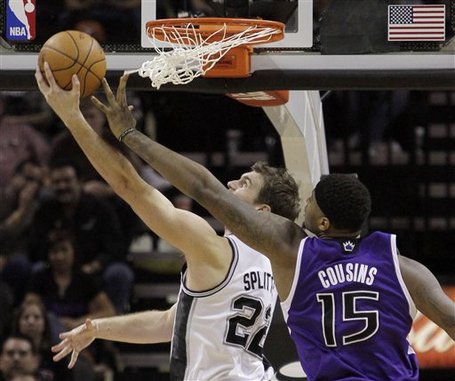 "If my sparkle can't distract you, I will just make a pretty reverse layup to mesmerize you, jes?"

We have a nice set of young players who belong in the league and are very capable of getting minutes. However, we cannot expect them to perform well on a consistent basis, for various reasons. Consider Kawhi Leonard, who has had a stretch of good games as a starter but ended the last two with a thud. As promising as he is defensively, the bulky and strong Evans put the rookie in the pick-and-roll torture chamber and burned Leonard's cornrows for twisting layups.

Danny Green, a career journeyman up to this season, had the pleasure (or misfortune) of being chosen to take the game-winning shot but missed wide. Even though he's shown an impressive attitude to be unfazed by the competition, he hasn't gathered enough moxie just yet to make big time shots. And he continues to drive me crazy when he drives and decides to jump and look to pass in mid-air. He definitely ain't no Steve Nash.

Gary Neal can shoot with the best of 'em but is not, and will never be a point guard -- a role which he has been forced to play given the team's injury situation and Cory Joseph's suckitude. This has had a negative effect on his game, with his usual mindset of moving without the ball and finding open spots shifting to trying to create for others. People aren't kidding when they say shooters gonna shoot, and to change their genetic makeup is like trying to use a chair as a defender when showcasing post-up moves. You won't end up impressing anybody.

I can make a laundry list of why we will fumble with the current lineup, but it's clear that we miss Manu (okay, TJ too) as badly as a plant misses the sunshine during winter. As Pop sort of implied early on, he can't expect the role players to hand in all-star performances, and neither should we. And that's why I'd rather hold on to that excuse every time something unusual like losing to the Kings blindsides us.

This team is both a steadying force and a work in progress, as contradicting as that may sound. The former, because teams always get up whenever they see San Antonio in the schedule. The prolonged, more than a decade of excellence has, fortunately or unfortunately, labeled games against the Spurs as measuring stick games. The way John Salmons mentioned post-game that this might be their best win yet coming against a "contender" might in reality be a little bit misguided, but it nonetheless should bring some pride (although it's quite difficult to feel proud after a loss). The latter, because as Fred Silva so fittingly described it, there is a learning curve involved whenever you bring youth into the equation. 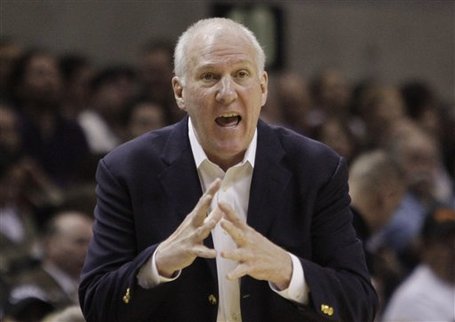 And Now, Where I Talk A Bit About The Game (Or Not Really)

But this is not just to heap it all onto the disjointed feel of the team so far. The Kings played a remarkably composed game in a hostile environment and for that, they deserve a lot of credit for this win. Despite not having sparkling credentials compared to his counterpart on the other side of the bench, Coach Keith Smart brings some stability in what otherwise would be a highly unstable environment. When DeMarcus Cousins was hit with a technical foul some time in the second quarter, it was admirable of Smart to push away a fuming Cousins and said something like, "don't call a tech on him, call it on me." The referee still called it against Cousins, but the coach's gesture seemed to calm down his team and inspired them to hold the ship steady.

The Kings then went on to stave off run after every Spurs run, and even when they lost the lead, they remained positive that they could take it back. Sacramento has a lot of young talent, no doubt, and they are as suspect to falling to bad, inconsistent stretches as much as the Spurs' mix of youngins and veterans are to this point. Unfortunately for us, the Kings held firm tonight.

As for the Silver and Black, I admittedly grew a lot frustrated with our starters for this game. I'd save the individual blame game for now and just say that they were out-hustled at every turn. Despite the offensive rebounding numbers ending up tied, it seemed like the Kings got the better of their second chance opportunities. The boxscore of both teams look as close as the game was, but in the end, stars win you basketball games and in the fourth, Evans and Cousins were rolling while Tony had to go it alone while an ineffective Tim Duncan watched all but 2 minutes on the bench.

Speaking of the bench. they did an admirable job of keeping the team in the game but as mentioned many times, they cannot always be counted on to do everything, including close out games. A 17-5 run happened to start the fourth starring Richard Jefferson, Danny Green, Matt Bonner, Gary Neal and Tiago Splitter. A quirky lineup indeed, and Pop stuck with three of them -- RJ, Danny and Tiago -- to carry out the job until the frantic finish. Too bad it's not the finish that Spurs fans would've wanted and at least for 9 games, always expected.

Right now, there's no time for self-examination. The season is moving fast at bullet train-like speeds, and everybody's best served to adopt a case of short-term memory loss. We might not be of the championship-caliber kind just yet and it's possible we might never get there this season. However, the league and the schedule makers don't care for anybody's plight at this point, nor did they ever do. There is another game to be played the following day, against in-state rival Houston Rockets, and the best everyone can hope for is that the team continues to take the proverbial one step back, two steps (or more) forward. Where we'll end up is as good a guess as anyone's.

3 - Danny Green - Even if he missed the final shot, it says a lot how Pop's confidence in this guy has grown.

2 - Tiago Splitter - No other way to say it, he needs to play more. That is all.