Tonight's match features two of the traditional power houses of the Southwest Division. The three Texas teams in the division have taken seven of the last sixteen championships. Although none of them are favored to take the ring this year, they are perennial threats. The Houston Rockets look to extend their winning streak to six, while the San Antonio Spurs are seeking to get the bad taste out of their mouths after losing their first game at home against the Sacramento Kings.

Houston is a team on the rise as their team is starting to gel. Although rumors abounded in the beginning of the season with a near trade of their core, Houston has seemingly worked out the kinks in the past few games and rising quickly in the ranks of the Western Conference. Their back court is locked with scoring and free throw shooting machine Kevin Martin, who can always be found at the top when it comes to free throws made and free throw percentage. Kyle Lowry teams up with Martin in the back and has been a great addition to the Rockets at the point guard position. Lowry leads the team in assists and can carry the bulk of team scoring when necessary.

The Rockets front court has been anchored by Luis Scola for a number of years now. The Argentinian is a quiet, versatile player that rebounds well and has nice range for a big man. Scola has had some of pressure taken off of his shoulders by new team mate Samuel Dalembert. Dalembert has brought a missing defensive presence in the paint for Houston ever since they lost their beloved Chinese giant, Yao Ming. Rounding out front court is rookie Chandler Parsons who has been a pleasant surprise for Houston.

San Antonio seeks to overcome a stunning defeat at the hands of the young Sacramento Kings at home. Tony Parker is still being forced to carry the weight of the team as he awaits the return of Spurs shooting guard, Manu Ginoboli. With Manu out, Parker was forced to score and create more. Luckily he was able to get some much needed rest with a quality back up taking over the responsibilities of running the team. Unfortunately, Parker and the Spurs lost that back up, T.J. Ford, to an injury recently. Now the weight of backing up Tony Parker rests on the shoulders of rookie Cory Joseph. Although showing glimpses of possibility the young rookie is not stable enough to trust with the team for any long period of time. 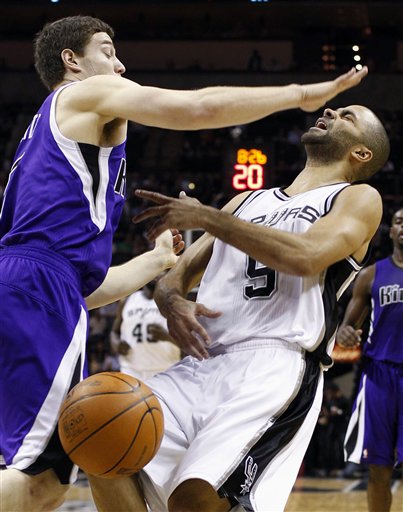 Center Tiago Splitter has been showing some great moves as of late. His play on both sides of the court has given Spurs fan's hope for a future that marches on beyond the greatness of the big three. Together with some of the other younger players, Green, Blair, Leonard, Neal, Tiago will seek to earn his stripes in a grueling NBA schedule this season. Earning a win in Houston would be a great continuation of maturity for this team.