Share All sharing options for: State of the Spurs: Analyzing Florida Road Trip

Welcome to the first installment of what I've promised will be a semi-regular piece with analysis, predictions, and the occasional ratred and hage filled rant.

For this first installment, I'm going to talk about what I saw that went wrong in Miami.

I want to blame it all on the officiating. I really, really, do. And they did play some part in what happened. But officiating did not make our offense stop running pick and rolls with Parker/Duncan/Blair. Or Parker/Tiago/Blair. Foul trouble took Duncan and Tiago out of the game, and eventually Blair too, but the offense moved away from what was working well before that happened. We left the pick and roll while Duncan was still in the game and tried to Iso him against Chris Bosh and Joel Anthony. While it was obvious he got fouled and there were no calls on several of those possessions, that play hasn't been consistently efficient all year. We rarely returned to the pick and roll in the second half that I noticed- we ran more off the ball motion and isolations.

Our second unit was tentative at best, and it seemed like nobody wanted to take a shot. I've long been a defender of PtR's favorite non-defender, Matt Bonner, but he either needs to start shooting or we need to replace him. I know the majority will vote "replace him" but my vote is still on him shooting...if he starts soon. He's been in a funk to start the season, and we are not very far in, but the quickest way out of a funk is to shoot your way through it.

In the second half, our defense started showing signs that they were incapable of performing basic cognitive functions. Does anyone remember the last title we won, how it happened? What our offense was like? If you don't, I'll tell you. We had a dominant big man down low, and we passed him the ball. If teams double teamed him, he kicked it out to one of the hired three-point-shooting guns in our arsenal, and they drained an open 3. Orlando used this same tactic last year and the year they went to the finals. Know how to beat Orlando?

Don't double team Dwight Howard. That's how! Because if you double Dwight, instead of him attempting a contested two (or getting fouled, which considering his free throw's are shot at roughly the same percentage as contested two's is never a bad option) he will pass to a statistically sharp three point shooter, and they will score three points. The moral of this story is: don't double off of shooters. It's an axiom that we pounded the league for the better part of a decade.

Know what we did against Miami? We doubled off of shooters, allowing Mike Miller to go 6-6 from downtown. As someone who loves defense, I've never been more frustrated than I was in the second half of the Miami game.

A. Blair's reaching habit, and whether it does more harm than good. What I'll be looking at specifically, here, is how many times he reaches and tips/steals the ball vs how many times his opponent scores after he tries that, but before Blair gets back in position, or if Blair fouls in the attempt to seal.

B. Matt Bonner's confidence- dude needs to start shooting. I'm still at the point where if he misses, it's OK for now...but you can't make a shot if you don't shoot, Matt. 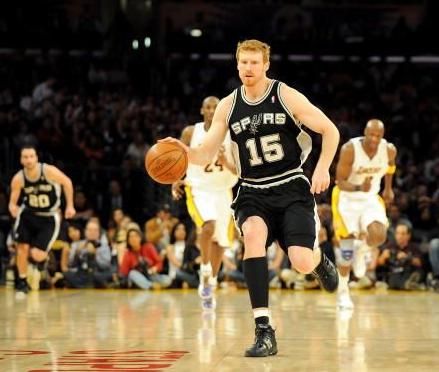