This loss to the Heat told a valuable story. Well, it told two stories: one in the first half, and its opposite in the second. During this stretch of LWM we will have to learn to accept these kinds of games, because they are very necessary.

And there will be more of them.

The good news is that this is all a learning process. While learning, we will pass some tests and we will fail some tests. The important thing is that the team uses these games as building blocks for our playoff future.

After such a defeat, I know it's difficult to see this game in anything but a negative light. But we must, as must the Spurs since they are counting on the highest level of play from several inexperienced players. Players who are not yet ready. The young are front-runners because they don't know any better. They have no sense of context and in their desire to win, a lot of other things get lost. Kids know that they like winning because winning is fun, and so they'll do anything they can to win, even things outside the rules. They don't understand that losing is necessary and teaches costly lessons.

It's a difficult change for Spurs fans, as we have become accustomed to veteran-laden squads that featured players such as Avery Johnson, Sean Elliott, Mario Elie, Robert Horry and David Robinson. But this isn't San Antonio's reality anymore. Instead we have young, exciting players with potential, but ones that will shake when an opposing crowd roars. These players will get better with every game that they play. These games against the best teams on the road will accelerate their development, as painful as it may be to watch.

Road games will continue to be rough on the Spurs. Tim and Tony can only handle so many minutes. The void will be filled by Kawhi, Danny, Cory, and Tiago. Inexperience is most visible on the road, as those who suffered through the third quarter in Miami just witnessed. At home, the Spurs have looked like unbeatable championship contenters. On the road they've looked, to put it politely, extremely mortal. It's simply a symptom of a young, but good team.

As a promising young team tends to do, the Spurs came out looking sharp and confident. Our veterans lead the way in the first half. Tony and DeJuan played extremely well from the opening tipoff. Tim, as always, was the cornerstone of the Spurs' offense and defense. Kawhi played excellent defense on Lebron and showed an all-around impressive offensive game. He really is starting to get comfortable out there as he finds the areas where he's most comfortable and productive. Danny Green felt the momentum and cashed in with two buzzer beating threes, the second of which was definitely Sports Center worthy. Cory Joseph filled in nicely for Tony, keeping the Spurs from missing a beat while Parker rested. Unfortunately, the first half came to an end. 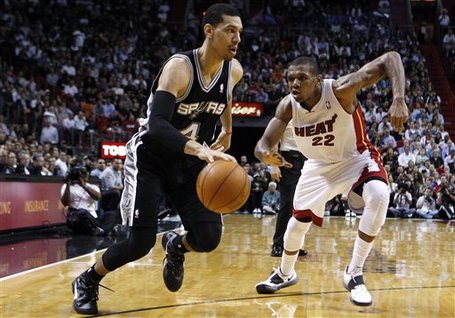 In the second half, we witnessed a collapse. You may be thinking: every team would lose to that Lebron performance. While I don't disagree, I do want to point out that the Spurs were caught watching the show. Our veteran teams of old would have thrown a counter-punch. This team looked disoriented and shocked. Pop refused to put his veterans back into the game, and the Heat's lead grew out of control.

This kind of defeat yields dividends. No one plowed through the NBA their first time out. All the greats had to lose before they could win. The other night, I heard Kenny Smith talk about this very thing. He spoke of the Houston Rockets having to lose to the Seattle Supersonics in the ‘93 playoffs so that they could understand what intense competition was all about. The following year they won it all.

I actually hope we have more of these games. Our young players need to feel the pressure on the road. They have to learn how to keep their composure and overcome. They must understand what it means to not take a possession off. They can't allow themselves to get rattled, to hear the crowd and let it take them out of their comfort zone. If these losses do not happen during the regular season, I promise you they will lead to our demise in the playoffs.

Tomorrow night, the Spurs will again be given a test. Although only one day will have passed, expect the Spurs to have aged greatly with respect to their wisdom. Popovich will no doubt preach composure and intelligence for the next twenty-four hours. Expect it to begin to sink in; begin being the key word there.

We are only fourteen games into this young season with fifty-two remaining. The Spurs should be proud of their undefeated home record while they focus on improving. The schedule will give this team plenty of opportunities in the near future, six of the next eight are on the road, and then there's the Rodeo Road Trip looming.

One foot in front of the other, Spurs fans. Walk before you run. Lose before you can win. We'll keep pounding that rock and soon, Life Without Manu will be over and our youth will have gained the experience necessary to win it all. This is simply a learning curve; we'll accelerate through this burtal season and eventually plateau into a seasoned, playoff-ready team.

Before the game got out of hand, DeJuan was on his way to a monster game. His deceptive moves were all on target and he was hitting the glass as a beast should.
2.) Kawhi Leonard 12 points, 6 rebounds, 1 assist and 1 steal
Kawhi played good defense against Lebron for the majority of the game. Of course, during the minority Lebron torched him, but sometimes contested jumpers fall, regardless of the defense being played. Leonard also showed an improved long-range shooting touch draining two from behind the arc.
1.) Danny Green 20 points including 6 of 7 from deep and 2 rebounds in 23 minutes.
Danny seemed to be the one calming influence when the Heat caught fire. He kept his composure and continued to play hard, despite the panic that engulfed the Spurs. Danny Green continues to be a bright spot for the Spurs, win or lose.