SAN ANTONIO — Well this is just getting plain monotonous, isn't it? Tim Duncan went for 24 points and 11 rebounds and Tony Parker chipped in 17 points and nine assists as the Spurs beat the Suns 102-91 to push their record to 9-0 at home and 9-4 overall. Ho-hum ... just another San Antonio win.

Of course I kid, as wins this year are as important as they've ever been given the loss of the team's best player. Remember that feeling two weeks ago: that feeling of panic when Manu Ginobili retreated to the locker room in Minnesota grabbing his precious left hand and shaking his head? Well here we are eight games later and San Antonio is now 6-2 during LWM. They're just the same old boring Spurs, aren't they? Just giving the ball to Timmy and letting him go to work.

We all know, as Spurs fans and observers, this hasn't really been the case. Yes, Duncan has been good in the fewest minutes per game of his career, but the story of the season thus far has been Richard Jefferson's consistency (although he had his second consecutive sub-par shooting night) and the play of the young guys off the bench or in the starting lineup. But tonight was a throwback ... a reminder of what San Antonio used to be like before that crazy Gregg Popovich started going all Mike D'Antoni on us and implementing up-tempo offensive schemes and jacking up 72 threes a night. Tonight it was Steve Nash and Timmy each recording a double-double in 35 and 31 minutes of action, respectively, reminding the national television audience these two future Hall-of-Famers are still major contributors in this youth-laden NBA.

Nash was just as much the maestro he's ever been, keeping the ball on a string and dribbling in and out of those pick and rolls that almost always result in a great look at the hoop no matter who his roll man is. Seriously, Marcin Gortat had 24 points and 15 boards, and this isn't Amar'e Stoudemire we're talking about. (I mean, Amar'e might have gone for like 37, but that's neither here nor there.) But even with Nash's 20 points and 10 assists, the Suns are no match for Duncan's Spurs at this point in the aging superstars' careers.

Still, it was a pleasure to watch. As refreshing as it is seeing the Spurs' youth mature, there's still greatness they're all far from achieving. Luckily for them, that greatness is right in front of their eyes, teaching by example. Education systems don't get much better, and tonight they had a chance to learn. After several games watching the bench do most of the damage to its opponents, the Spurs' starting five did its job tonight with the Big Fundamental leading the way. Whether he was crossing over between his legs to set up a baseline fadeaway or spotting up for what has become an automatic jumper (well, "jumper" ... more like "stander") Duncan was feeling it tonight. Despite his age and increasing minutes in the absence of Ginobili, the 15-year vet is looking spry on both ends of the floor. As Pop said after the game, both he and Nash are models of dedication.

"Timmy and Steve are two good examples of people taking care of their bodies, that's for sure. They're both trim and cut ... slim. They watch what they eat. They take care of themselves," Popovich said after yet another meeting between two of the all-time greats the NBA has seen. "It really shows on both of them."

But outside of the vintage performances of Duncan and Nash, it was another staple of the Spurs franchise that has resurfaced after lying dormant for the last few years. San Antonio's defense is back ... to a certain degree, at least. While it's certainly not as suffocating as it once was, it has looked quite good over the last several games. The Spurs have now held three straight opponents to less than 43 percent shooting, and what's more: San Antonio is holding the opposition to less than 90 points per game since inserting Kawhi Leonard - who hit two 3-pointers tonight - into the starting lineup. His length and basketball I.Q., Danny Green's athleticism and Tiago Splitter's ever-evolving overall game off the bench have given the Spurs what they've been missing since their last title. In recent years it's been athletic guards and big swingmen that have given San Antonio fits on the defensive end, but the new depth in the rotation, especially on the wings, has given the Spurs an answer to that problem in the early going. And when the silver and black are putting up an average of 101 points it makes wins a little easier to come by.

"It's progressing. It's been way too high for the first couple games of the season and it's been up and down," Duncan said of the Spurs' defense, most notably the opponents' field-goal percentages. "We're not at the consistency we want to be at, but all in all we're getting there. We know it's a work in progress ... we know it's a long season. We knew defensively we needed to be a lot better."

And, as Timmy said, the defense is definitely still a work in progress. We've seen some great outcomes recently, but none of those have come on the road where the Spurs are winless so far this season. And let's not be mistaken, San Antonio has had the fortune of a home-heavy schedule at a time when most of the teams that come to the AT&T Center are operating with far less efficiency than can be expected come March or April. But you can only play the cards you're dealt, and the Spurs have played their hand well with an undefeated record in the Alamo City and a hold on the No. 2 spot in the Western Conference. But that's soon to be tested.

The schedule ahead will get more and more menacing for a team without a road win as the Spurs head to Florida for a back-to-back against the Miami Heat and Orlando Magic beginning Tuesday. With more road games looming as we lead up to the RRT, the improving San Antonio defense will be put to the test against teams capable of putting up a ton of points (though Dwyane Wade is out indefinitely and could miss Tuesday's matchup with an ankle injury).

It's easy to get caught up in the ebb and flow of today's NBA, especially in this chaotic post-lockout season, concerning ourselves with the drama of which young superstar is demanding a trade and how our favorite teams are handling the ridiculous schedule of a compacted 66-game season. And watching and enjoying the youth movement of this Spurs team in the absence of Ginobili and T.J. Ford has been a lot of fun to analyze and over-analyze as these young players have brought some excitement and promise to San Antonio.

But it's on nights like these when we're reminded of the brilliance and beauty with which two of the best the league has ever seen play the game. And as Nash went to the bench grimacing in pain upon his fourth-quarter exit and Duncan left wearing his technologically advanced knee brace that looks like it could launch a satellite into space, we know we probably won't have the opportunity to watch these two titans of their sport do battle for much longer.

So while this NBA season is as fast-paced as we've ever seen, making it almost impossible to keep up with all the goings on around the league, sometimes it's important to just stop and watch. Every Nash-orchestrated pick and roll, every Duncan turnaround is as fleeting as the game itself, and one day they'll only be memories in a box score.

It's a long season, so why not just relax every so often and take in the view? It won't be around forever. 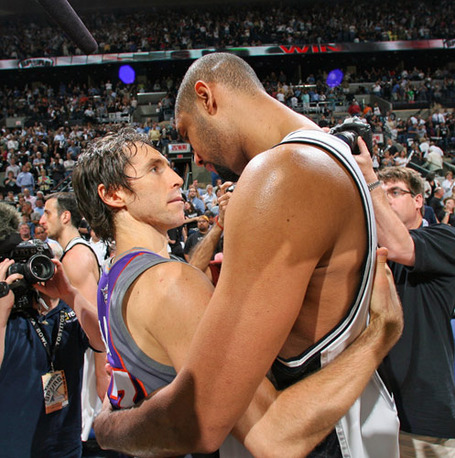 The "big man" in the middle played with a lot of energy once again as his 10 first-quarter points got the Spurs off and running early in the game.

TP has been a model of consistency since Manu's injury, and since Ford went down he's been logging a ton of minutes with the inexperienced Cory Joseph and the natural shooting guard Gary Neal backing him up. Tonight was no exception.

Timmy turned back the clock in this one as he and familiar foe Steve Nash did battle. And on another note, Duncan continues to climb the All-TIme NBA scoring list as he passed Gary Payton for 26th overall on Sunday night.