Thanks to Tony and the MOB, Spurs Defeat the Blazers

Share All sharing options for: Thanks to Tony and the MOB, Spurs Defeat the Blazers

Tony and the MOB you ask? Men Off the Bench, my new name for the young 'uns who came in and played the roles of heroes at various times during this one. Tiago gets the nod as the man most likely to wear the Supermanu cape in this game - 5 of 5 shooting, 4 of 7 free throws - and 9 of his points came near the end of the third quarter when the game seemed to be slipping away from the Spurs. 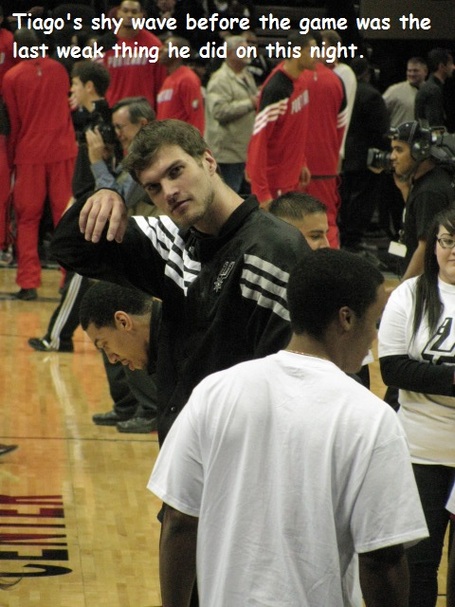 During introductions I captured some good shots of Tim engaging in a couple of pregame rituals: 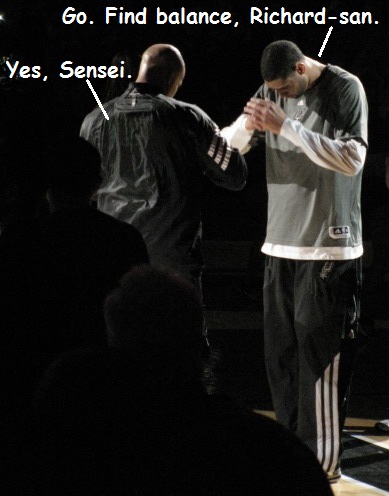 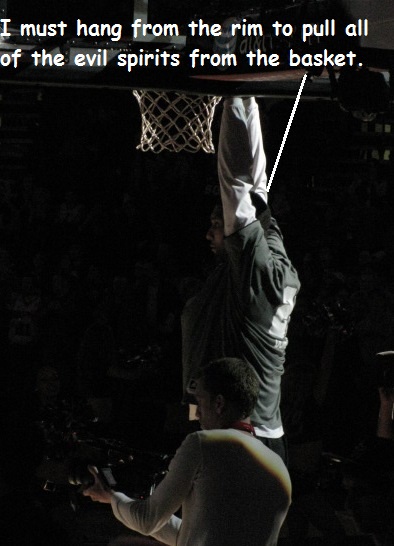 The meeting of captains before the game saw two of the senior citizens of the NBA at center court. Camby will turn 38 in March, and Duncan will be 36 in April. Poor Camby would go out with a sprained ankle, after playing 13 minutes and 13 seconds on Friday, the 13th. 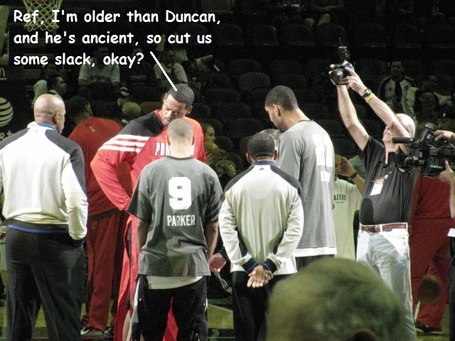 Another NBA elder came off the bench for the Blazers, 39 year old former Spur Kurt Thomas. He and DeJuan faced off - a gap of 17 years between them. 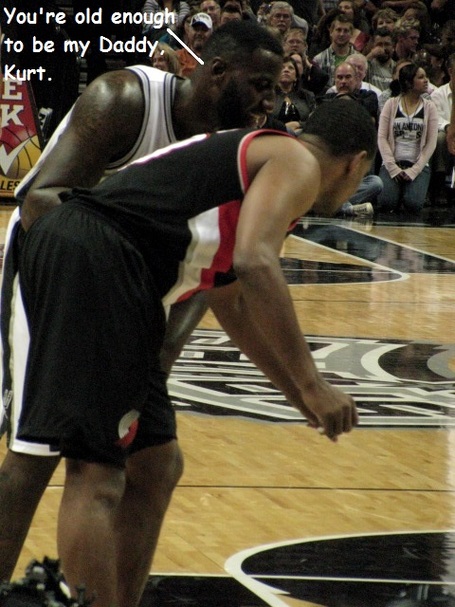 Pop was in considerable distress caused by numerous calls early on in this game. He just stood at one point and fixed his steely-eyed gaze on one particular ref. 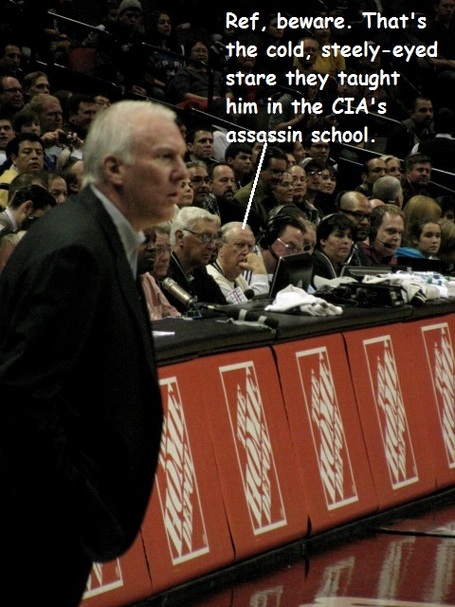 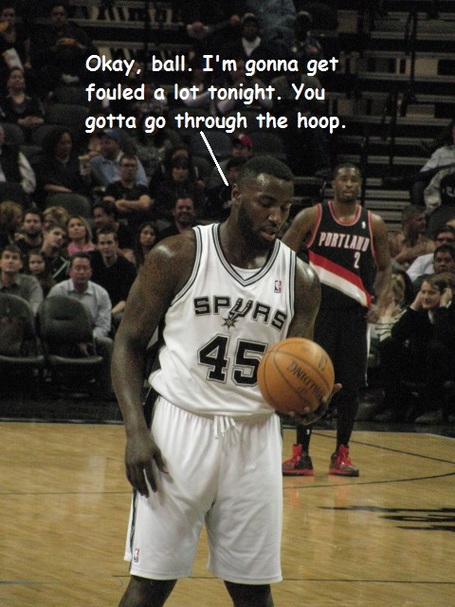 Tony struggled through the first 3 quarters, but in the fourth period, when it was money time, he came through to seal the win. He went on a 10-in-a-row scoring run. He had two steals that he took coast-to-coast. I'm posting this pic not because of the great quality, but because you can see that only 3 seconds went off the clock between steal at one end and shot at the other. The same thing happened on both steals and layups. 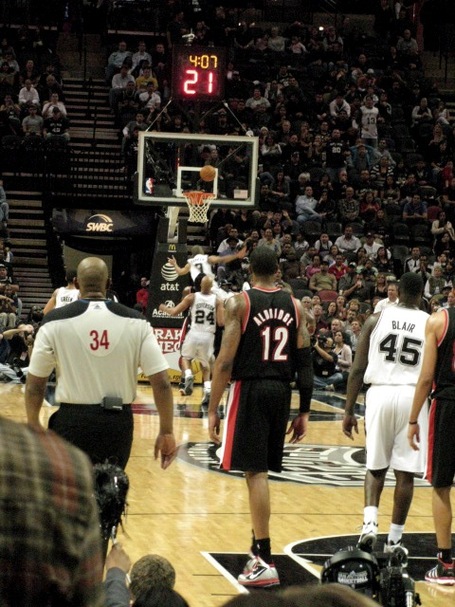 The MOB and Tony played so well in the 4th quarter that Tim was able to rest the entire time. He and the rest of the bench were very animated tonight - standing and encouraging the guys on the court the whole way. 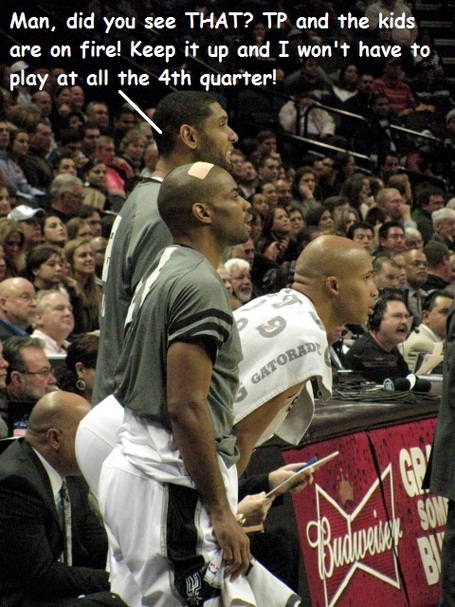 At a timeout with 8:43 left in the 4th, Spurs up by 12 after being tied at the end of the third, the guys came off the bench to greet their teammates on the court. RJ and Tim went way past the center line. The Spurs really wanted this one. 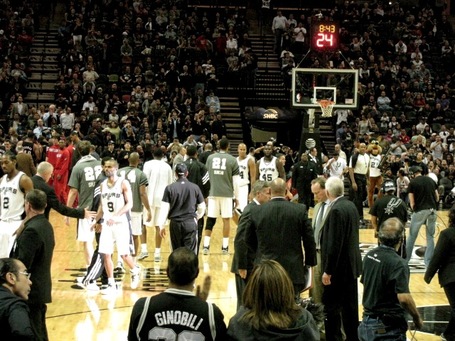 In case you're wondering about Gary Neal's bandage on his head, his wife, who sits behind me, said he bumped his head at home. 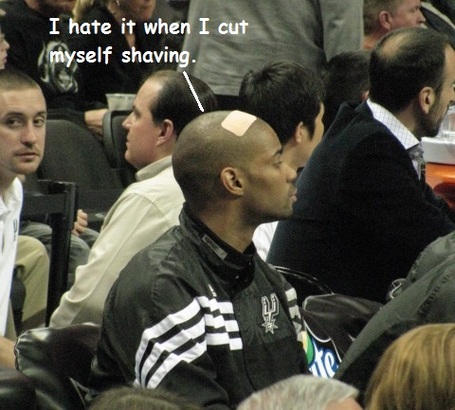 And here's your sneakers for the night - really sweet, and a big upgrade from last season. 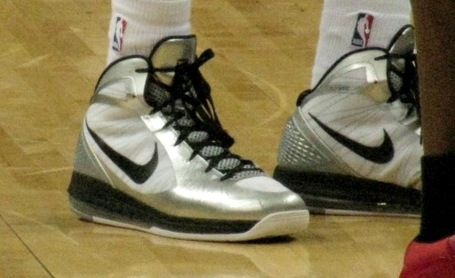