San Antonio — It's on nights like these when the Spurs hope their youthful reserves step up and play well less than 24 hours after a difficult road loss in Milwaukee. But on an evening when Tim Duncan and Tony Parker were supposed to be the tired old guys, they looked very much like the seasoned veterans they are, trying to hold a young group together through trying times.

San Antonio overcame clearly tired legs Wednesday night and hung on for a 101-95 overtime win against in-state foe Houston, and it was an especially brilliant Parker who led the home team to the much-needed victory.

The former Finals MVP played like the team leader he is expected to be during LWM, dropping 28 points and eight assists in more than 45 minutes of action against the pesky Rockets. And what's more impressive than the season-high point total was the way he scored them. One night after playing a then season-high 36 minutes in Milwaukee, Parker's constant dribble-drive penetration was a relentless thorn in Houston's side. The 11-year vet looked like the TP of old, attacking the basket repeatedly and hitting that patented step-back jumper all night.

And Parker's performance was especially welcomed after the Spurs were hit with more bad news on Wednesday. Team physician David Schmidt informed the silver and black earlier in the day T.J. Ford would be lost for the next four to six weeks after the backup point guard suffered a small tear of his left hamstring in the first quarter against the Bucks on Tuesday night. Ford was thriving as the head of the snake for the Spurs' second unit, and his contribution as a distributor will be sorely missed on a team already without top playmaker Manu Ginobili.

But, once again, San Antonio found a way to grind out another win on the SEGABABA and keep the Spurs undefeated at home (which turns out to be pretty important given the fact they're winless on the road). And not to be understated was the play of Duncan.

The Big Fundamental was classic Timmy most of the night, getting into the lane with the short hook and fading away over his right shoulder for that unforgettable turnaround. The vintage Duncan performance of 17 points, 11 rebounds, five assists, three steals and two blocks in just more than 38 minutes of action brought back memories in the AT&T Center (as did the late misses from the free-throw line, but Spurs fans easily dispose of those memories when they see the banners hanging from the arena rafters). And on a night when the four-time NBA Champion passed Larry Bird for 27th on the All-Time scoring list, the stat-stuffing box score was apropos. 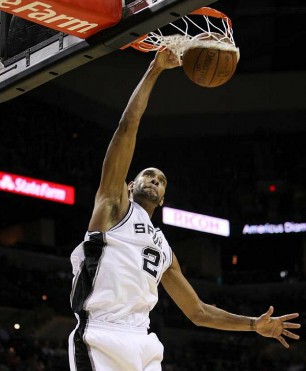 The remaining two components of the Spurs' Big 3 played a combined 83 minutes in this one, a total we haven't seen in a while given Pop's tendency to rest his stars on the SEGABABA in recent years. In what have become near must-win games given San Antonio's current set of circumstances, the Spurs don't have the luxury of giving their stars a night off. The consistency from Duncan and Parker are certainly expected, but the constant appearance of another name in these recaps has become a welcomed surprise.

Richard Jefferson hit yet another huge 3-pointer with just more than one minute remaining in overtime to give the Spurs a 94-92 lead, one they would never relinquish. Jefferson is giving us more and more reason to believe he's found harmony within the system, and if he's open from the 3-point line you can forget about it. It's going in. (I realize this is a dangerous mindset to have, as clearly they will not all go in. And it's worrisome that it will get to the point where I become angered when he does miss ... in the fourth quarter ... of the playoffs ... in, like, Game 7 of the Western Conference Finals against the Thunder, or something. I need to stop thinking about that. But, I digress.)

His play, along with the emergence of Kawhi Leonard in his first start and the defensive effort of Danny Green, has become a more than pleasant surprise for the silver and black. One night after Spurs coach Gregg Popovich described his team defensively as the worst he's ever had, it seemed the message was received. It didn't start out well - the Rockets scored 27 points on 65 percent shooting in the first quarter - but the stingy Spurs defense we saw in the first several games of the season showed itself eventually. The insertion of Leonard into the starting lineup gave San Antonio a longer, better defensive team to match up with the opponent's first unit, and that, along with his rebounding, has been critical for the Spurs. Green also got late minutes alongside the rookie Leonard, and his contributions defending Lowry and Martin are becoming commonplace after similar performances against other big scorers over the last week.

This was another one of those games where you were almost positive somebody would pass out around mid-court due to exhaustion as both teams were rounding out a back-to-back. You know, the lockout special? It was the Spurs' sixth game in eight nights, so winning this type of grind-it-out game is huge. We're seeing what LWM is all about right now, and at 4-2 (7-4 overall) during that stretch I think it's safe to say the Spurs have handled it well. But the luck isn't exactly turning in their favor with the loss of Ford providing San Antonio another challenge it could do without. The team's two best passers, Manu and T.J., will not be able to play for what could be the next month and a half, and now the players who are healthy will be asked to step into roles that might not be a natural fit.

Still, Pop has his team ready for all the mixing and matching, and the veteran leadership combined with the youthful energy has created an interesting dynamic on the court. And while lady luck doesn't seem to be on the Spurs' side lately (or at least in their training room), San Antonio is capitalizing on its skill and experience to stay atop the Southwest division.

As Louis Pasteur once said about the idea of luck: "Fortune favors the prepared mind." In the Spurs organization, this is the only acceptable state of mind.

3. Kawhi Leonard — the rookie scored 11 points and collected eight rebounds while playing more than 37 minutes in his first career start. His work on the boards and on the defensive end has been invaluable for a team starving for that type of play.

2. Tim Duncan — On a night when the Big Fundamental passed Larry Legend for 27th on the All-Time scoring list, it's tough not to put him No. 1. Every minute of Duncan's vintage night was crucial for the Spurs in this one.

1. Tony Parker — It was TP's best night of the year, without a doubt. The relentlessness with which he attacked the paint during his 45 minutes was classic Parker, and on a night when he had to play big, he was huge.