Share All sharing options for: FWTE: PtR & The Dream Shake, Round 2

"What do we got on the spacecraft that's good?"

Well, don't say you didn't see this coming. Our last go-round was such a rousing success, I got an e-mail from the ghost of Dostoevsky asking for pointers on how to "maximize his word count." At least, I think that's what it was about. I took it at face value.

Anyway, here's Only_A_Lad from The Dream Shake for another edition of Fraternizing with the Enemy. Be warned, we go even further off-topic this time. Enjoy, and as always, play nice with visitors.

Good to see you again, Laddie! Our last interview was apparently so long, I'm told it took longer to read than to actually watch the game. To alleviate that this time around, I'm going to do my part of the exchange entirely on my phone. You may need to type one-handed.

It's been an interesting week, obviously. You destroy us, then we lose Manu. You lose some more, including a narrow one to the Thunder, then we reel off three-straight wins before getting clobbered by the same Thunder. By the transitive property, that makes the Rockets a better team than the Spurs. What gives?

Thanks, it's good to be back. Yeah, since we last did this a lot has happened. Sorry about Manu. I wish I knew what to tell you about that, but we Rockets fans have never really had to sit through losing our best player to injury. Nope, never happened.

Right now things are crappy. You know that part of "Men in Black" where Tommy Lee Jones (or maybe it was Rip Torn) says that the Earth is always being threatened by something huge and the world is always ending? That's kind of what it's like right now. For the last week or so it has felt like the Rockets were in free fall. For a while they had the worst free throw-drawing offense in league history, but now (thanks to two better games against OKC) they're merely the worst since the introduction of the shot clock. The defense is the second-worst in the league. The Rockets looked simply outclassed for a few games there, and it didn't help that Kyle Lowry was gone (after 15th-man Jeff Adrien stepped on him) for two games, though Goran Dragic looked solid (you guys know about that, right?).

The consolation is that the Rockets have faced what is probably the toughest schedule in early season, and Rockets GM Daryl Morey has said that as long as they get three wins in the first ten games, they can recover. So it's not so bad, I guess. But the fans sure think it is. 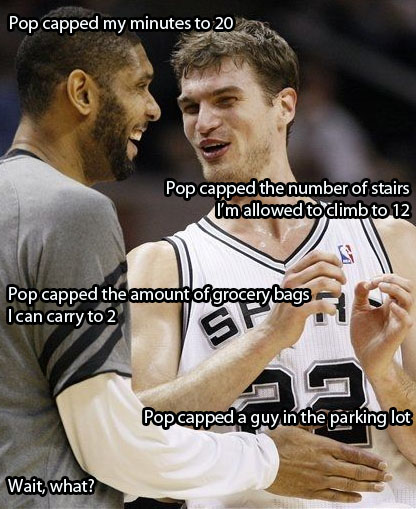 Because it can't be posted enough... via Doc Funk

Well, we here at PtR know a think or two about lamenting the state of our defense. [Author's Note: AAAAAARRRRRGGGGHHH] The last few games have been shootouts in the bad kind of way. OKC just embarrassed us, and the Nuggets game resembled an old ABA matchup, complete with excruciating rotations and poor boxing out, saved only by the hot shooting of our new savior, Danny "MONEY" Green.

You don't have to be Tim Curry in "Clue" to deduce Ginobili's importance to the Spurs, but the real surprise has been the emergence of our young second unit as we enter LWM (Life Without Manu.) Neal's back, and Tiago grows more comfortable by the day, and Leonard makes up for his poor shooting with his gigantic hands.

I did hear about Lowry. That reference to Men In Black is spot-on: there's always a fractured metacarpal, or plantar fasciitis, or a broken nose that is about to wipe this silly little team off the face of the planet. The only way we fans can get on with our lives... is by drinking heavily.

I still believe you're dangerous, but thank Tebow this game's at home. Our splits show us to be a real Jekyll & Hyde team. Then again, there's been an unusual number of blowouts this season; with the compressed schedule, teams are quicker to throw in the towel. That first quarter is more important than ever before.

See, the difference between the Spurs' defense and that of the Rockets is that the Rockets aren't supported by an elite offense anymore. Last year they had a bad defense and a great offense. Now, for reasons that are largely unknown (but it's probably the shift away from Adelman's offense to a more conventional one driven by Lowry) the offense sucks. Bad. Houston is currently 11th in offensive efficiency, but somehow it seems a lot worse to me. The Spurs might have a bad defense right now, but they have the most effective offensive attack in all of basketball right now. They're the '09 Blazers of 2012 -- slow, conventional, and unstoppable on offense. Maybe that's why the Rockets handled them well in December. Matchups be funny like that.

I'm not as down on the Rockets as most of the other peeps at TDS are right now, but I'm not exactly hopeful going into Wednesday night. Second leg of a back-to-back, an away game, and against a playoff lock... the Rockets haven't done well with those sort of games so far. Others will blame that on "heart" or something; I'm more inclined to say it's just small sample size and poor execution. The Jekyll/Hyde thing is true of the Rockets, as well, and I'm inclined to blame that on sample size and the season schedule, too.

Right now everyone's upset because the Rockets lost four in a row to the Lakers, Clippers, OKC, and OKC again. Only the middle two were blowouts, and I'm not _that_ worried about the Rockets' season right now. It could be a lot worse. And there's reason to be excited, what with Lowry playing like a maniac and... well that's it, really. Still, by Wednesday Lowry should be back, and McHale has only really thrown in the towel in a semi-winnable situation once this season -- that game against Memphis. So don't expect the Rockets to rest their starters. They need this win badly. Particularly if tonight goes poorly against the Bobkittens.

We're also about to kick off a BABA with a very winnable game in Milwaukee, but I'm not going to bother to make any predictions so I don't look like a fool tomorrow. [Author's Note: ... ... ... ]

For our last segment, let's turn the subject away from disappointing basketball to Houston's true bright spot--the Texans. Are the natives as surprised as the rest of us by this Yates kid, and should those of us in South Texas (historically Cowboys Country) be jumping ship? Make your best argument; I'm very open to it at the moment.

I don't know if South Texas "should" turn towards the Houston Football Astros, but over time it probably will. The die-hards are what they are, but the vast majority of people ("casuals") are more inclined to follow a rising team than a dieing one, if if the former has more history. And, you know, the Cowboys aren't looking too good. Jerry Jones continues to refuse to hire a real General Manager. I think that's really all that needs to be said.

The Texans have finally made good, and it feels great. This city has had to put up with decades of Bud Adams's (occasionally deliberate) destruction/gutting of the Oilers, his eventual hissy fit when the city wouldn't build him a personal Xanadu, followed by a decade of total irrelevancy and/or awfulness from the Texans. That they are finally good, that it has finally happened when Wade Phillips returned to his home (it's odd to anoint Phillips as the chosen one, but there you are), and that it has finally happened despite all of the problems they've faced this year is enough to make Houston truly love the Texans. Houston always supported the team, but there's a difference between support and love. It helps that owner Bob McNair doesn't seem like total slime, and it also helps that the team is genuinely likable. Even supreme douchebag Brian Cushing is more amusing than hateable. I mean, they've got a guy who did this when he finally got the opportunity. Arian Foster writes poetry and did an Olajuwon tribute in the endzone. Connor Barwin looks disturbingly like David Lynch (it's the hair). What's not to love?

The Teejster (alternatively, TJ Yeezy) is a definite surprise. I mean, he's not great or anything, but the fact that the Texans have an average-ish backup is nice. And he doesn't do crazy shit like try to vault over the Indianapolis Colts. I'm a believer. And I totally think they can win at Baltimore this weekend. The real question is if Tebow and Co. can win against New England. Tebow might think he has God on his side, but I'm reasonably certain that Bill Belichick is actually the right hand of Satan, so we'll see how this all turns out.