After a third quarter collapse in Oklahoma City, the San Antonio Spurs will try again for their first road win when they play the Bucks tonight in Milwaukee. The Bucks are 2-6 but have been competitive in losses and benefit from Andrew Bogut's return. Milwaukee's solid defense is up against an elite offense even with Manu Ginobili out, and if they can't make a brick-fest of it we'll have our win and they'll be further mired in another slow start. Lineups, game preview and prediction when you take the jump.

If there's a bright spot for Milwaukee this season it's in the play of reserve PG Shaun Livingston. The Bucks' starters have been getting demolished with Bogut out of the lineup while Livingston has been leading the bench in doing the catch-up. Brandon Jennings leads the team in the "I know that guy" factor, but don't be surprised if Livingston is the fourth quarter PG.

Unless the point guards in tonight's game can put up more points than they have been lately I predict an ugly basketball match. Tony Parker is the difference between being one of those top NBA offenses and being in the middle of the pack, for tonight's game and going forward. We remember his 2008-2009 season where Manu was injured and Tony rose to the challenge. If he can be that kind of threat on a nightly basis it'll keep our shooters open and keep our offense in elite company. 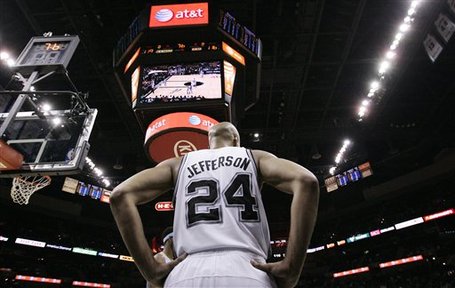 When the benches are duking it out Spurs fans have a lot of young players to monitor and get excited about. Gary Neal, James Anderson, Danny Green, Tiago Splitter and 'new kid' Kawhi Leonard all have the potential to blossom into playoff contributors, something the Spurs need if they're not in the market for a trade. In tonight's game we're just looking for somebody who can get rebounds and score on the road against a quality defense.

The Western Conference is wide open right now, and beyond OKC being a force there's no telling who will end up where. This would be a sweet win to pick up before games against western rivals Houston (2-6) and Portland (6-2).