Coach Popovich got his 800th regular season win tonight. Longevity is a good thing, and so is continuity. Both Manu and Tim were quoted after the game as saying they were proud of their coach. Pop brushed aside any individual adulation by giving the credit to those who surround him: "When you get that number of wins, it does mean you’ve been hanging around for a while," he said. "You’ve got a good staff, good players and a good management team. We’ve all achieved 800 wins. I haven’t, really." 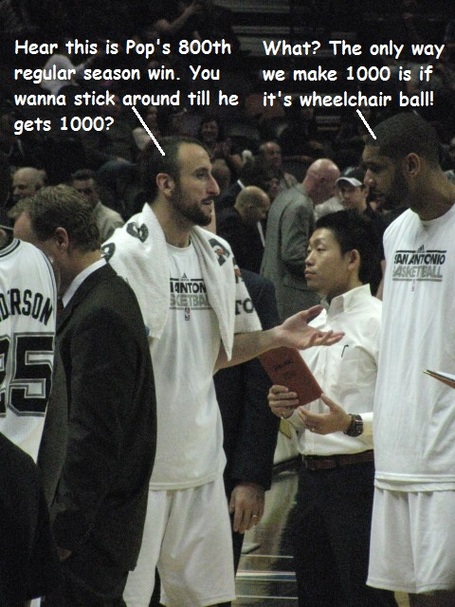 But on this night, for this win, he had to thank Manu more than any other Spur. He was simply SuperManu once again - donning his cape for 23 points in only 24 minutes, only 10 shots (missed only one three), with 14 points coming in the second quarter alone. I can only attribute his performance to the pregame delivery of homemade alfajores. 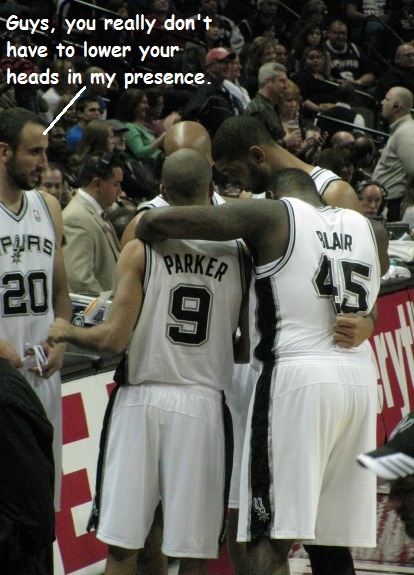 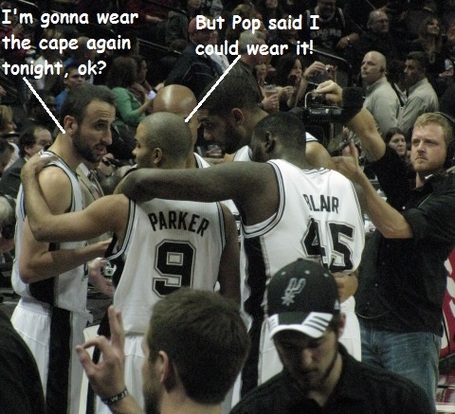 DeJuan recorded another double-double with 10 rebounds and 17 points. 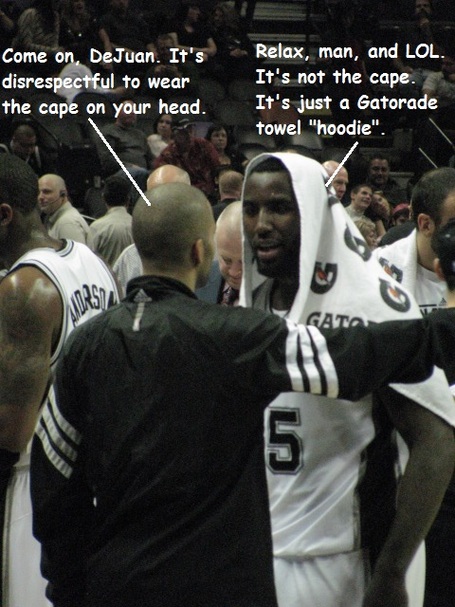 While watching warmups, I noticed the Spurs 'favorite" ref, Joey Crawford, enter the court, wearing a suit, to check the replay equipment. Recalling that he was the ref who tossed Tim for laughing on the bench, I couldn't resist telling him to "call 'em like Tim sees 'em" as he walked by me to leave the court. He actually laughed out loud - didn't ask security to remove me. 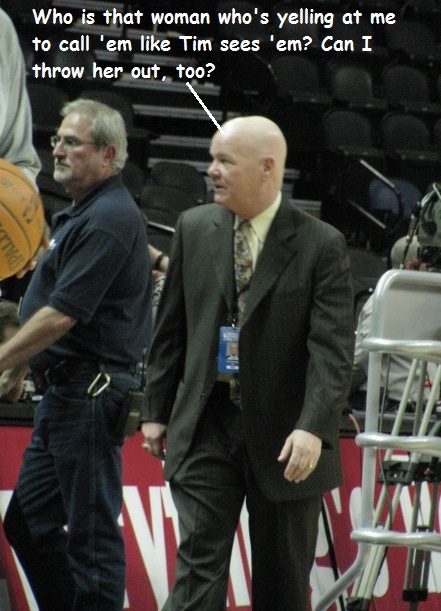 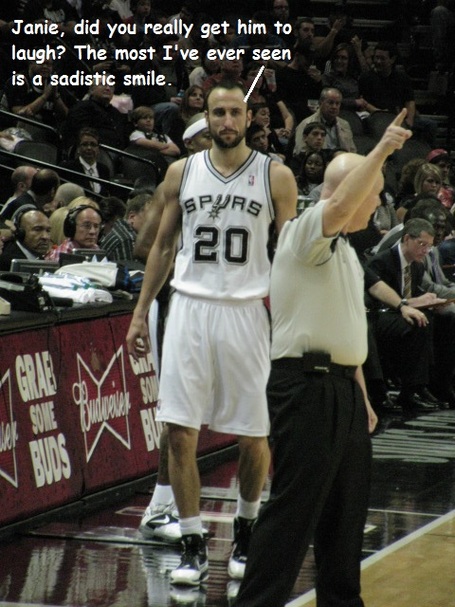 Kawhi Leonard's huge dunk in the first half brought the crowd to its feet. 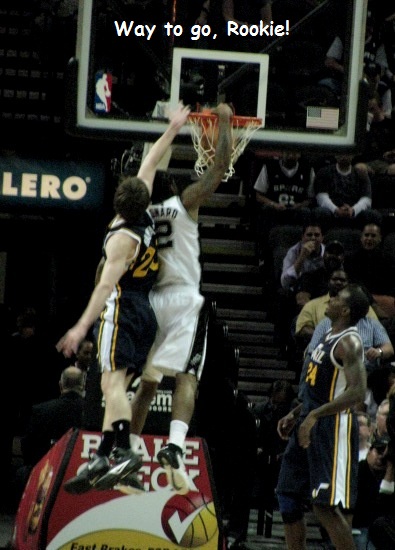 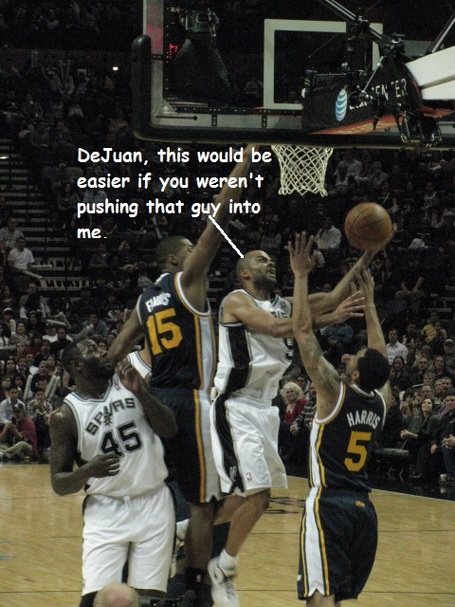 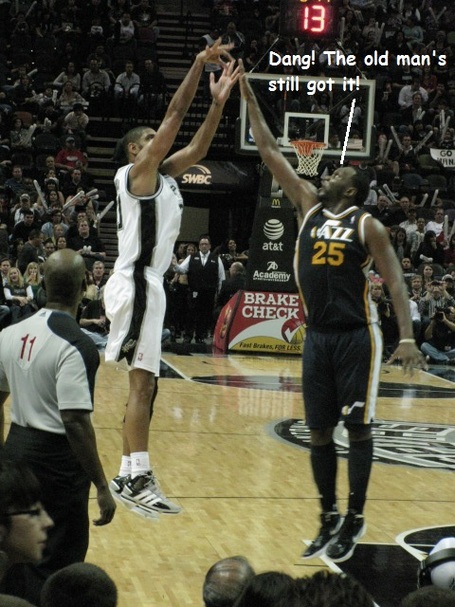 In the second half, rookie Enes Kanter had to guard Tim. As Tim drove the lane, Kanter fouled him, knocking him backward. As Tim was falling, he tossed up the shot, and it went in (you can see it on nba,com's highlights). As Tim prepared to shoot his free throw, Kanter stood staring at Duncan with a look of wonder and disbelief - welcome to the NBA, young man. And, yes, your mother called and said she saw that, but she still loves you. 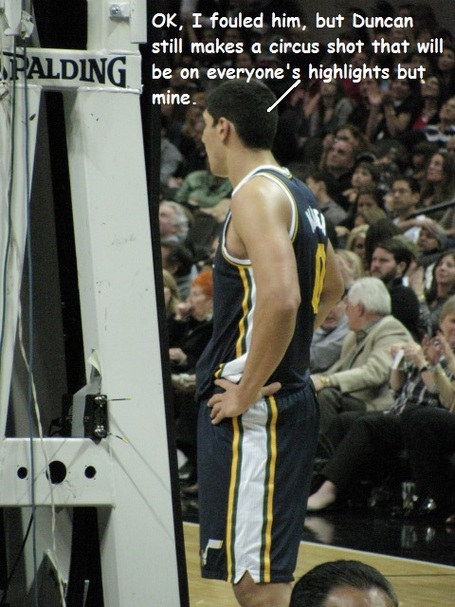 Jefferson seems to enjoy the attention he gets from the sign ladies during warmups when a sign of his jersey is held up. He smiles and waves. 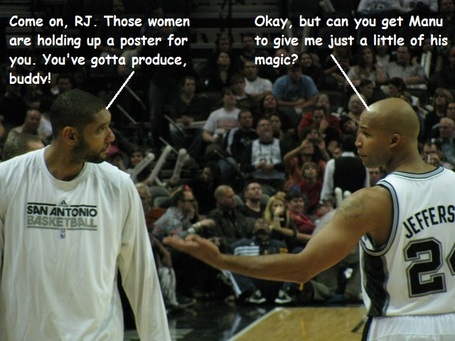 Before the game I spoke briefly with Manu and asked him if he was rested after the Houston game. He laughed and shook his head and said, "yeah, sure," as though rest was not to be for the next four months. Thanks to the early lead, he was able to play about 10 minutes less in this game. Tim's minutes were also measured tonight to try to preserve his energy. 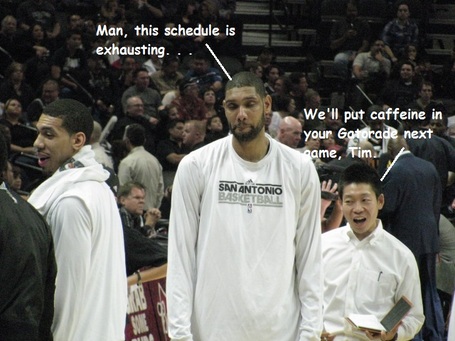