Share All sharing options for: PCL: Midnight in San Antonio

Welcome to the third installment of my very own, JRW-mandated series "Coach Pop Culture Lessons," where I comment on things wonderful and terrible in the world of entertainment, and desperately attempt to connect it to our beloved Spurs.

I sometimes think I was born too late.

If it were up to me, I might have chosen to be born around 1970, so I could come of age in the most legendary, fondly-remembered geek age of Star Wars, Dungeons & Dragons, Atari, The Breakfast Club, and much, much more. 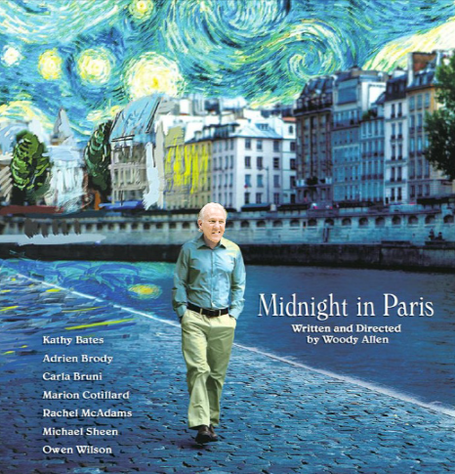 Where I'm sure he'd rather be

There's a book that came out this year called Ready Player One which I highly recommend. It's essentially Willy Wonka meets The Matrix, with a near-overwhelming heaping of 80s nostalgia: the games, films, music, and culture of a time that I just missed, but dozens of internet writers I respect warmly recollect. It's set a few decades into the future, when the world spends the majority of its time plugged into in a hyper-realistic virtual reality that has become synonymous with the Internet. In order to win a prize, the fortune that the man who created this system left behind, the "players" have to look to the past. Specifically, the creator's past. I won't go much deeper into the book, because it's worth discovering on your own, but it's just one more landmark in a year that CNN dubbed "The Year of Nostalgia."

And now, a story.

[Author's Note: Woody Allen's sublime Midnight In Paris is about a writer, on vacation in France, who is magically transported to a time with which he's obsessed--the "Lost Generation" of 1920s Paris. It is here the similarities end.]

I didn't usually go into downtown San Antonio on New Year's Eve, as I have a tendency to be a bit of an introvert and don't like waiting in long lines. But for some reason, I felt called to join the festivities, at as safe a distance as I could muster. So, alone, I drove down I-35 and exited at Commerce, where I followed the one-way streets for a while until I found a largely-empty parking lot where I could see the Tower of the Americas (and the impending fireworks) in the distance, but wasn't anywhere near the crowds.

Then, at midnight, while the sky lit up, "Auld Lang Syne" played, and I didn't feel any different, a clunky-looking sedan pulled up behind me. The door opened, and I was beckoned inside.

The first thing I recognized was the song "The Dreaming Tree" from the Dave Matthews Band album Before These Crowded Streets. A good album. I remember my mom listening to it when I was a kid. The driver didn't speak to me, even though I asked who he was and where we were going--this might have raised a lot of red flags under normal circumstances, but I had a strange feeling about this that made me go along for the ride.

The car--a 1998 Toyota Corolla--made for the highway, before taking a left turn in front of a building I knew really well: the Alamodome. An eyesore, a white elephant, too big for basketball (but too small for football)--it had been called a lot of derogatory names, all of them earned--nevertheless was the source of a lot of fond memories for older Spurs fans.

And, unusually, it was fully lit up. Like there was a game going on.

The car pulled up to the front gate, and the driver unlocked the door, still without saying a word. Curious, I began to get out, but he turned and handed me a piece of paper. I stared at it.

It was a ticket.

And... somehow, it was a over a decade earlier. Memorial Day.

As soon as I stepped out of the car, I was hit by an incredibly bright light, but after a moment I realized that night had suddenly turned to day, that this was a matinee game, and that things were getting really, really weird. After opening my eyes, I was surprised to see that the gates were empty of fans, but a look at one of the outdoor televisions answered that question, too. The 4th quarter was just beginning.

My excitement rising, I ran into the stadium.

I remembered where I was at this moment in history--an 11-year old boy, who didn't know everyone's name on the team but was unquestionably certain that an 18-point lead could never be beaten; it was over, pack it up, go back to your room and play with your re-issued Star Wars action figures. And I turned off the television, despite my parents still being in front of it, because what was the point?

I missed what happened next. And now, finally, I was going to get to see it with my own eyes.

As you all know, it wasn't over. The Spurs clawed their way back thanks to sensational play from David Robinson and a young Tim Duncan (then in his second year in the league,) but it's Sean Elliott who became immortal. With the crowd screaming their lungs out, goofy pink "Go Spurs Go" signs waving everywhere, he hit as big a three-pointer as has ever been hit: heels off the ground, just out of bounds but off the ground, snagging the inbound from Mario Elie, unbalanced but with the confidence of a shooter who's been on fire for the past twenty minutes... well, you know what happened. The Miracle happened.

And then, as the old Alamodome erupted, a nuclear bomb of giddy, unbelieving, tear-your-hair-out joy (and the unforgettable words of Bob Costas echoing in my ears), there was a flash of light, and I was suddenly back in the parking lot, next to my car.

I felt like I was supposed to have learned a lesson, like I had been visited by some kind of Ghost of Spursdom Past, and maybe there were two more coming, but I began to realize that that was it. I'd been given a special window into a moment I felt deprived of. And the more I thought about it, I came to understand that to hold that, or any other moment, as the height of fan experience, it is making one terrible assumption: that everything that happens from then on is a waste, because how can it approach what we felt before?

Our most special of experiences can never be taken away, but when we fixate on the memory of those moments we miss the ones right in front of us. Like now. Like this year. Like Tim Duncan, 13 years later. We are the Spurs fans of 2012, and the grass has never been as green as it is right here, right now. Appreciate it.