Minus Nocioni, Argentina Falls to Brazil 73 -71

Share All sharing options for: Minus Nocioni, Argentina Falls to Brazil 73 -71

Tiago Splitter is said to have decent footwork in the paint, but his best move of the night may have come as he was out-jumped on the opening tip by Andres Nocioni. A slight, subtle nudge with his hip (not hard enough to be intending to cause harm) threw Nocioni off balance, and Chapu came down with his right ankle sideways. Play had to be stopped after 5 seconds as Nocioni lay on the court clutching his ankle. If you follow Argentine basketball, you remember that Nocioni missed the World Championships last summer after sustaining a severe sprain to his left ankle. The injury he suffered in this game was said to be a minor sprain, but he did not return to the game or the bench, and is doubtful for tomorrow's game against the Dominican Republic. (Update - returned to the hotel in a "boot" - Thursday morning MRI scheduled, sprain called "moderate" on Thursday - working with the trainers on treatment, but arrived for MRI barely able to walk) 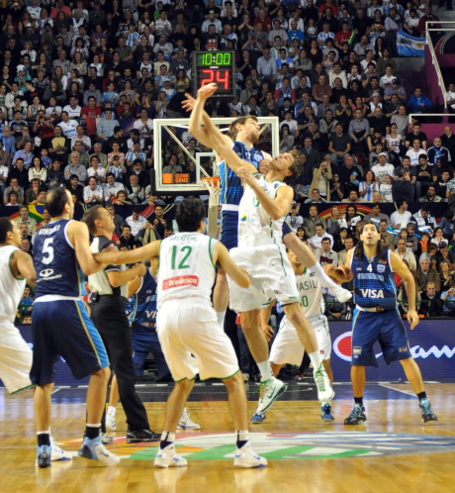 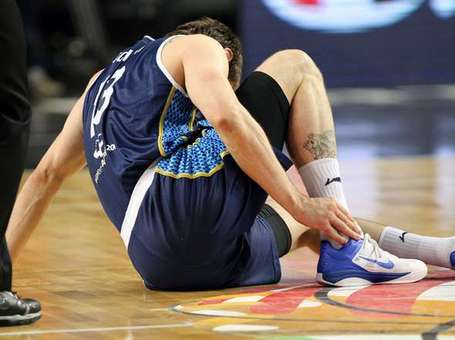 So how was the rest of the game? The first half was a back and forth battle: Brazil led by 2 at the end of the first quarter, but Argentina was up by 1 at the half. In the second half Brazil opened up a larger lead, but Argentina battled to the end. With two minutes remaining, Scola picked up his fifth foul (he was called for two offensive fouls in :36), making a comeback more difficult for the boys in blue.

And how did Tiago fare against his buddies Scola and Manu? He picked up 8 rebounds and 3 assists, and that's the extent of his highlights. He was 0 for 5 from two feet, picked up his only point on a free throw, and was blocked by Ginobili and out-manuevered by Scola. In what may have been a good thing for Brazil, he picked up his third foul early in the third quarter and was taken out. His sub, Rafael Hettsheimer, was brilliant: 9 of 11, 8 boards, 2 steals, and a blocked shot - he was a real difference maker for the Brazilians. 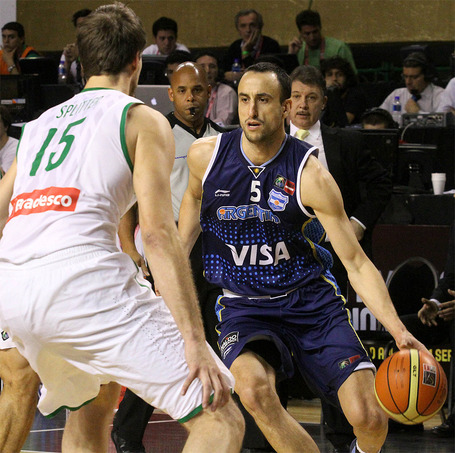 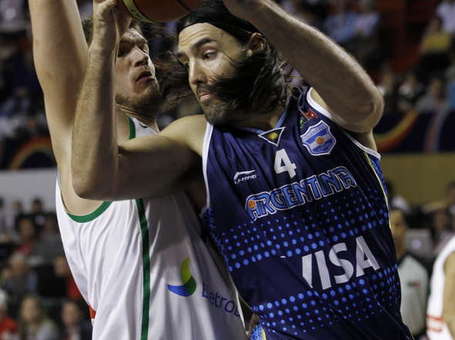 Scola and Manu led Argentina in scoring with 24 and 14 points respectively. They continued to run textbook screen and roll plays. 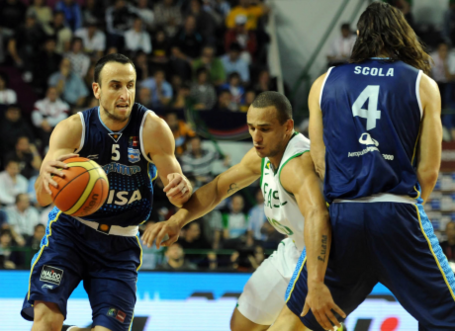 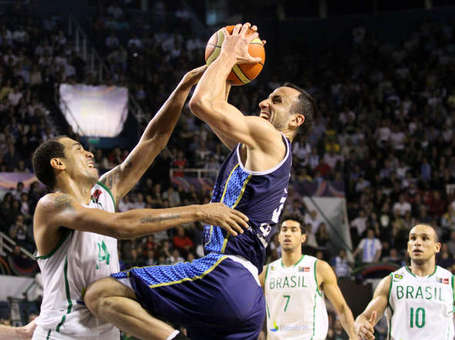 Manu logged 33 minutes in this game. He also was tripped up on one play in the third quarter and came down hard with his right arm extended, and appeared to be hurting for a bit. He did not come out of the game, however, and after a few times up and down the court, seemed to forget about the arm.

The officiating in this one was not as good as it has been in the tournament, with a mix of ticky-tack calls followed by no-calls on some very physical contact. Brazil's Alex Garcia appeared to be complainer-in-chief, but I saw Manu send him a "shut up and play" message - after Garcia knocked our guy to the floor, Manu gave a subtle kick to Garcia's shins as he was getting off the floor. One particular call in the first quarter upset Argentina's Coach Lamas - a whistle blew to call a foul away from the ball on Scola, and the players seemed to stop, except for a Brazilian shooter. The shot was allowed, but it sure looked like the whistle was blown before the shot.

But Argentina cannot blame officiating or injuries for the loss. Brazil outscored them on fast break points 11 -3, and Argentina uncharacteristically missed 5 of its 13 free throws - can't do that in a close game.