I found myself putting new words to the old disco hit "It's Rainin' Men, Hallelujah!" during this game. Argentina bombarded Venezuela by making 18 of 28 three pointers (64%). The stats for 3's were amazing: Manu - 6 of 8; Prigioni - 6 of 7 (not known as a shooter); Nocioni - 4 of 5; Hasen and Sanchez were each 1 of 2. I'm guessing Delfino had to pay for dinner - the usually sharp-shooting Carlos was 0 for 4 from beyond the arc. The Argies also shot 62% from inside the circle. Watch the Highlights: Argentina Defeats Venezuela, More Highlights, and Still More Highlights 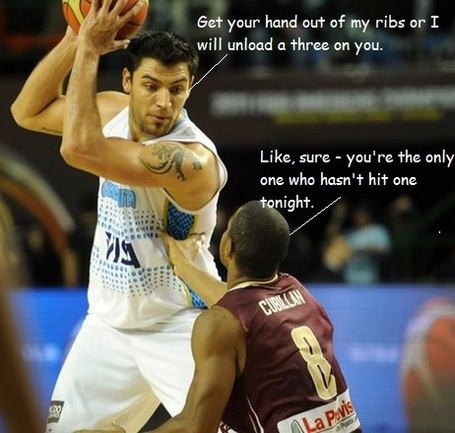 Photo by Fabian Gastiarena, for Clarin

Luis Scola didn't try a triple - he didn't need to. He was 7 for 11 in field goals, shooting equally well under the basket or from the elbow. He's really looking good - channeling his best Tim Duncan moves. 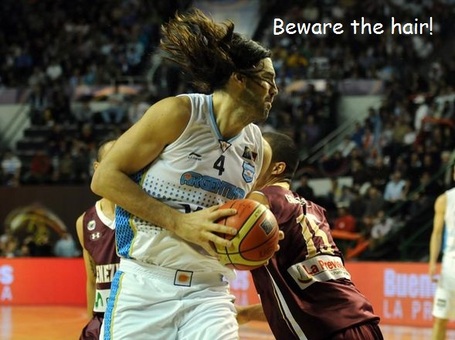 Photo by Fabian Gastiarena, for Clarin

But the game tonight belonged to Manu. Playing 26 minutes, he rocked in 26 points, none of them from the free throw line (he missed on his only attempt, the first one in 21 attempts for the tournament). He also had three steals. Shots were falling for him tonight - we've all seen it, that magic that seems to come over him. Probably his favorite shot was the contested three that he was fouled on, and it didn't hurt that he did a great job selling the foul. 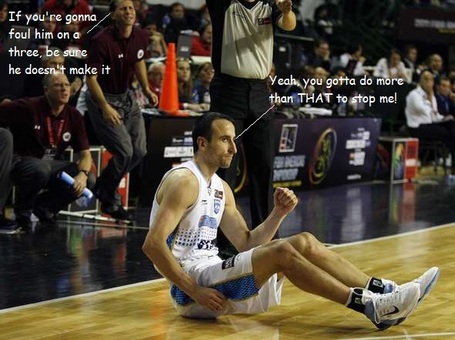 He was just as deadly on his drives to the basket, connecting on 4 of 6 two-pointers. But when the game was over, all he wanted to talk about was his team's poor showing on the defensive end, saying: "We were a sieve," and calling the effort one of the worst in recent years for the national team. He said it might be overlooked because of the offensive show, but clearly let his disappointment show in giving up 93 points, many of them in the paint. 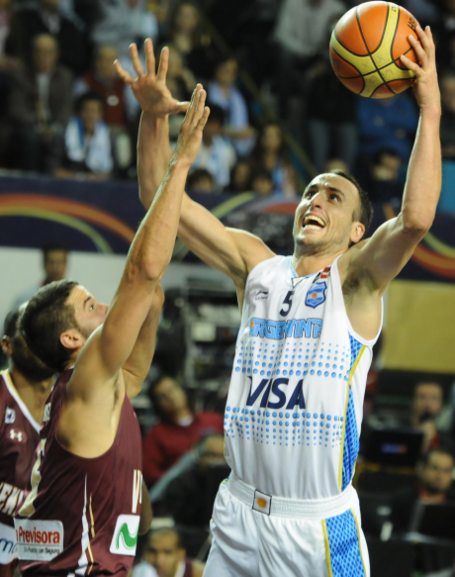 Pepe Sanchez, the back-up point guard for Argentina, logged a few more minutes tonight. Playing more as a facilitator at the age of 34, he seemed to grow more comfortable in this game, driving to the basket for a bucket and joining in the "three-party" as well. 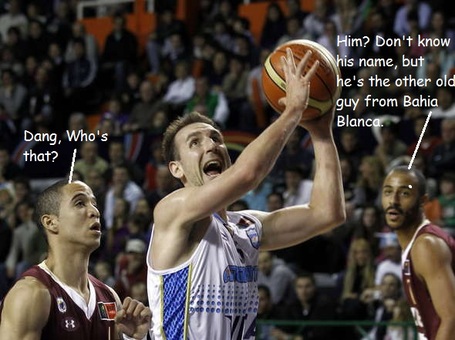 The Argentine crowd appeared to be pacing itself in this one, saving up for a big party tomorrow against the Brazilians. They did, however, enjoy some never-before-seen-in-the-country NBA traditions like KissCam and Karaoke, thanks to the "cube" as they call it - the lighthouse suspended over the center of the court. It's the first one ever in Argentina, and they are enjoying it. And flags and signs were everywhere. I think I got "out-signed" by this one: 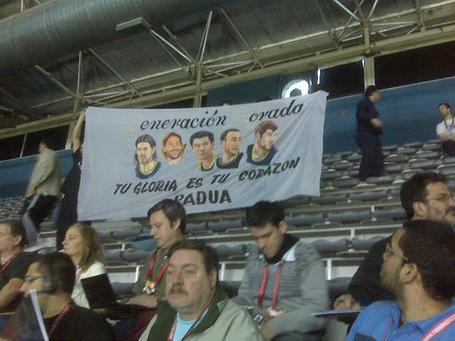 Tune in tomorrow when Brazil and Argentina clash. Tiago will be going up against good friends Manu and Scola from the NBA as well as Pablo Prigioni, his teammate from the Spanish league. And I'll just bet Argentina plays a bit tougher on defense.