Argentina put on another defensive and offensive clinic today to defeat team Canada, 79 - 53. In the first half, Manu drove to the basket at will and ended with 14 points. After the break, he and Scola ran the pick and roll to perfection as Scola ended the game with 22 points, 19 of them in the second half. Everybody in the arena knew the play was coming, but the young Canadians could not defend it. 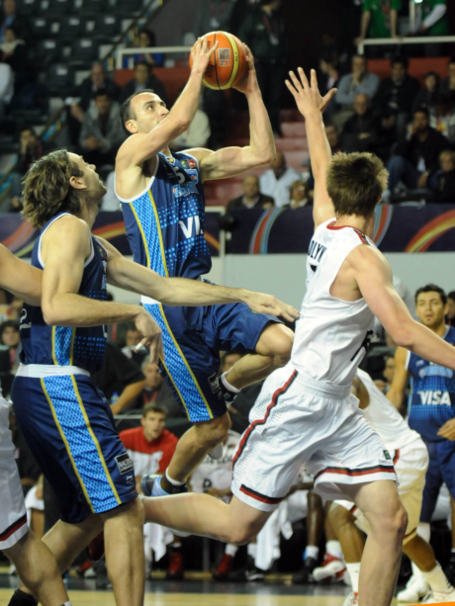 On defense, Argentina switched on every screen and dared Canada to shoot the three - the Canadians were held to 27% shooting from the field. Canada committed 22 turnovers, 13 of them on steals by the active-handed Argentines. Click to watch the highlights (narration in Portuguese?) Argentina v. Canada Highlights. Thank you, Jalberto, for the link.

Scola is quite simply a beast around the basket. His footwork seems to have improved greatly. It will be interesting to see how he responds to being coached by Kevin McHale this season. 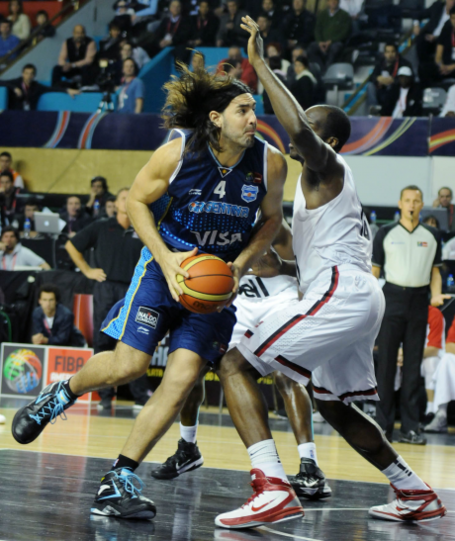 RC Buford was in the house, no doubt scouting for future draft choices, but also to watch one of his new proteges, Cory Joseph. In the pregame exchange of tokens, Manu met up with Joseph. It was one of the few pleasant moments Joseph had during the game. He played 20 minutes and went 0 for 5. About all he could do on defense was stand in awe of Manu. Here he guards Pepe Sanchez. 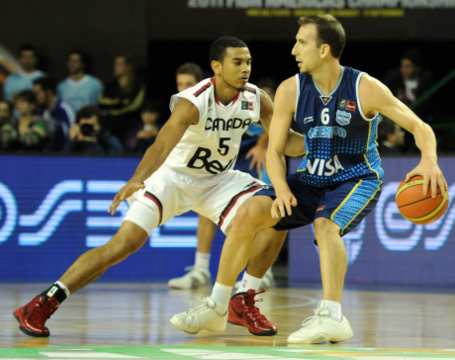 Early in the game, Manu dove to the floor after a loose ball, with little regard for his 34 year old body. He looks in great shape, by the way. 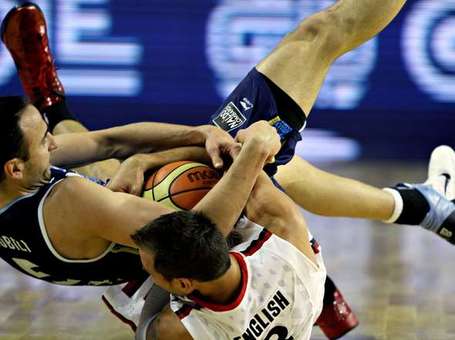 Other random observations on this game:

The huge sponsor ads on the fronts of the jerseys could cause someone with no knowledge of the game to believe that Bell was playing VISA.

Fabricio Oberto is still rusty on offense, but he's a presence on defense.

Argentina continues to show off their passing skills, patiently working the clock to get the best shot. Canada, on the other hand, had poor shot selection, and often shot early in the possession.

On Sunday Manu stayed away from the presentation of a book of photographic history of the national team, Elegidos (Chosen). He was said to be suffering from a cold, but Express News' Mike Monroe revealed it is a sinus infection, now being controlled with antibiotics. The book, by the way, features some 500 photos of Marcelo Figueras, taken over the last 10 years of the national team, recording some remarkable history in the world of international basketball competition.

The biggest news out of the games today concerned Edgar Sosa of the Dominican Republic. With 38 seconds left in a game the DR was winning easily over Panama, he drove to the basket and came down awkwardly on his right leg, snapping both bones in a compound fracture. He screamed in pain under the basket. He was taken to a hospital for surgery and faces a long recovery. You can search for the video on YouTube, but be warned that it is stomach-turning to watch - his leg looks like it has a joint between the knee and ankle.

Argentina's next game is against Venezuela, who lost to Puerto Rico today. After the game, Venezuela's coach Eric Musselman was asked at a press conference "How do you see tomorrow's game against Argentina?" and to talk about how he intended to address his team's weaknesses. Before the interpreter had finished the translation, he started gesturing and expressed disbelief that he would be asked such a question. He definitely could have used a Snickers! Perhaps he was upset over an ejection of one of his players in the closing minutes of the game. Nestor Colmenares (VEN) and Renolda Balkman (PR) were tossed and later suspended for the next game of the tournament. Or maybe he realized he had no answer for Argentina, having lost 4 straight games to them in the last month (3 friendlies & one in the tournament).

And finally, just because they are so darned cute, Nico and Dante Ginobili enjoying the game in their little jerseys, one with an eye on the scoreboard and the other one appearing to coach: 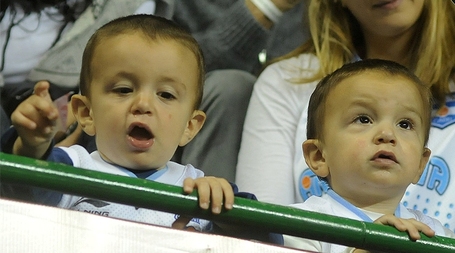