Pretty? No, But Argentina Defeats Panama 90 -71

Share All sharing options for: Pretty? No, But Argentina Defeats Panama 90 -71

The Golden Generation looked a little tarnished in the first half against Panama, and trailed 38 - 39 at the half, mostly due to poor shooting by the boys in blue and white (37%). Panama, led by Ruben Garces and Jaime Lloreda, came with a strong inside presence on both offense and defense. But the third quarter saw new life for Argentina. Led by Andres Nocioni's 10 points in the first three minutes of the quarter, they took the lead and never looked back. They won the third quarter 20 - 12 and the fourth 26 - 20. 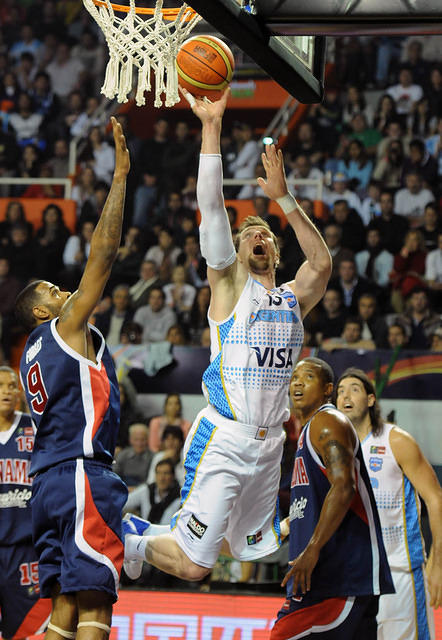 Watch the highlights: Argentina v. Panama - at 1:35 you will see Manu displaying his best "manuness"

And this: Argentina v. Panama - at around :50 you will be sure Manu is going to shoot a three, but he finds Scola under the basket for a sure two

Manu was Manu - 14 points and 8 assists: sometimes splitting Panama's zone to drive all the way to the basket, other times driving and kicking it back out or feeding Scola in the paint with a nice bounce pass. Midway through the fourth quarter he had a nifty drive along the baseline, crossing under the basket before flipping the ball backwards into the bucket. A few possessions later, he again drove along the baseline after an outlet pass from Prigioni. This time the defense came to cover and he dished to ball to Scola in the lane. However, he did all his scoring in the second half. 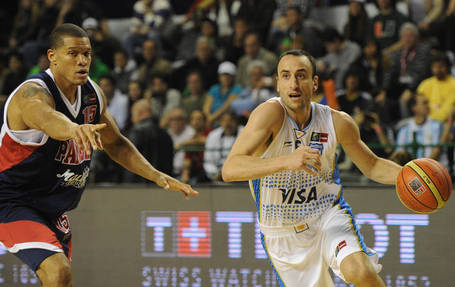 After the slow first half, all five of Argentina's starters scored in double figures. Point guard Pablo Prigioni contributed 5 three's, including one that went in at the final buzzer. Scola led with 19 points, and grabbed 14 rebounds. Nocioni tossed in 18 points, and Delfino finished with 11. At the end of the game, Argentina had improved its shooting percentage to a respectable 47%.

Gail Goodrich and Alvaro Martin called the game again for ESPN3. Goodrich, who really needs a quick lesson in how to pronounce Spanish surnames, kept commenting on how many minutes the Panamanian players were logging. But Manu and Prigioni were on the court almost as much for Argentina, after playing 30-plus minutes the night before in the tough game against Puerto Rico. As the outcome of the game became a foregone conclusion, I wondered why Coach Lamas left his top players on the court. A couple of times I held my breath for Scola as he went down. Early in the game, he and Manu collided going after a rebound and both tumbled to the floor. Manu got up rubbing his knee, but the replay showed he banged it hard on the floor - no twisting, and Scola jumped right up.

And I saw a first for me in a FIBA game: a goal-tending call, against Panama! FIBA rules are more liberal when it comes to touching the ball around the rim. But this one was clearly a goal-tending.

The tournament continues Monday. Paraguay and Cuba are going home, but the remaining 4 teams from each group will play the teams from the other group. Argentina goes in as the only undefeated team. They begin play on Monday against Canada, the #4 team from group A. They face Venezuela on Tuesday, Brazil on Wednesday, and the Dominican Republic on Thursday. The top four teams will emerge into the semi-finals beginning on Saturday. It's a grueling tournament.