Manu Gets Goosebumps as the Crowd Cries for Argentina

Share All sharing options for: Manu Gets Goosebumps as the Crowd Cries for Argentina

Argentina went up against a tougher opponent in facing Puerto Rico. Both teams seemed a little tight in the beginning. Things threatened to get a little chippy in the early going. At one point commentator Gail Goodrich (who insisted on calling Manu "Mano") said, "The game looks like a nursery. Everybody's crying." The lead changed hands 8 times in the first quarter. Manu was Argentina's only bright spot on offense in the first half, and Puerto Rico, led by Carlos Arroyo, took a 36 - 34 lead into the locker room. Manu at one point was urging the crowd to get into the game, and they of course, responded. He said after the game "I got goosebumps playing in a stadium like this." 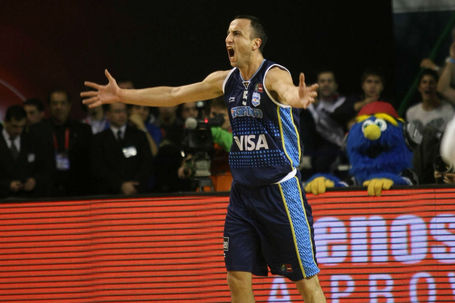 The Golden Generation came alive in the third quarter. They came out with renewed defensive intensity. They ran the ball better. Shots began to fall. And when the dust had settled, they had outscored Puerto Rico 28 - 14 in the quarter. At one point they went on a 16 - 0 run. Turnovers ultimately did in Puerto Rico: 20 that led to 21 points by Argentina. At game's end, the Golden Generation had passed their first serious test in the tournament, defeating the Puerto Ricans 81 - 74.

Luis Scola became the leading scorer in national team history in this game, contributing 16 points. He also played in his 100th game for the "seleccion", beginning in 1999 at the age of 19 - yep, that's him with short hair. 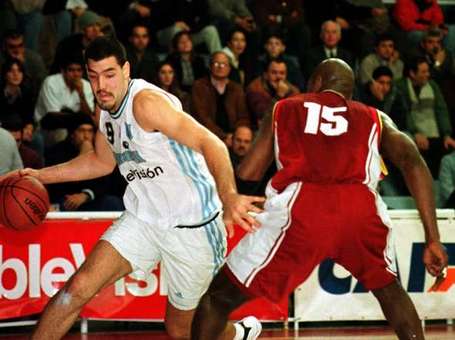 A happy moment for Argentina occurred in the first quarter when Fabricio Oberto took the court for the first time in nine months in a meaningful game. The noise was deafening as the crowd chanted and sang his name. The only noise louder during the game was the whistling every time JJ Barea touched the ball, the Argentine way of booing a player. 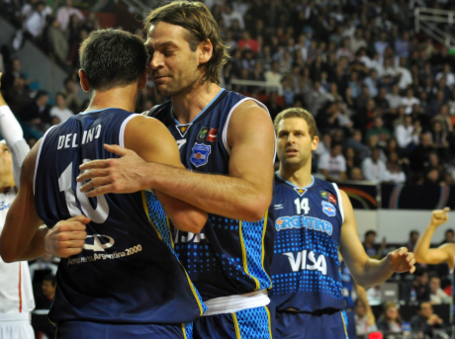 It would be Manu who put the team on his shoulders in this one, however. He finished the night with 23 points, on 6 of 14 shooting, converting 8 of 8 free throws, and executing those patented Ginobili drives to basket, tucking the ball in, relishing the contact, and looking more like a running back than a shooting guard. He also was tenacious on defense. 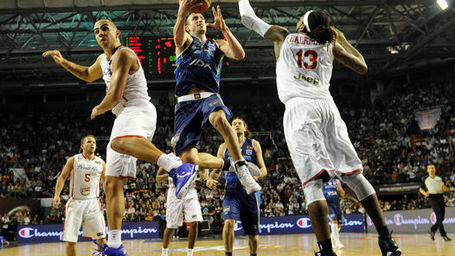 Saturday Argentina faces Panama at 6:30 CDT in the final game of the first round of play.