Share All sharing options for: Eurobasket 2011 Final - France vs. Spain 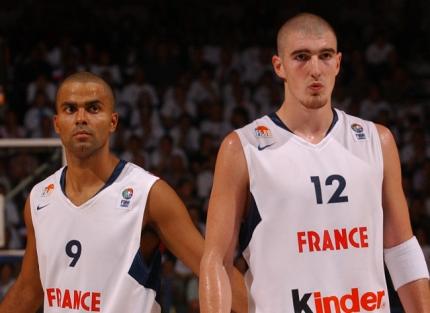 Tony and Nando will try to lead France to an unprecedented European Championship today.
Image via SpursTalk

The winner of Eurobasket 2011 will be decided today. On one side, there's the French team, including Tony Parker, Nando De Colo, Nicolas Batum, Joakim Noah, and some others that play high-level European basketball professionally. On the other side will be heavy favorites Spain, including the Gasol brothers, Serge Ibaka, Ricky Rubio, Jose Calderon, Juan Carlos Navarro, and... well, I think you get the idea. This may be the first time that so much NBA talent has met in the final of a European championship, so it bears watching.