Share All sharing options for: It Had to Be the Hair! Argentina 80 - Brazil 75

The Biblical Samson's hair was cut and he lost his strength. Before the gold medal game in FIBA Americas, several players on the Brazilian team decided to cut their hair in what can best be described as "The Last of the Mohicans Brazilians." Luis Scola, on the other hand, took the court with locks flowing, and dominated the game with 32 points.

Highlights: Argentina Wins FIBA Americas from Basquet Plus or this: Argentina Defeats Brazil

Celebration Highlights: Six Minutes of Pure Joy & Happiness and this: The Slide

And one more - Dancing on Top of the Bus (home video, but a great celebration with the people outside the hotel) 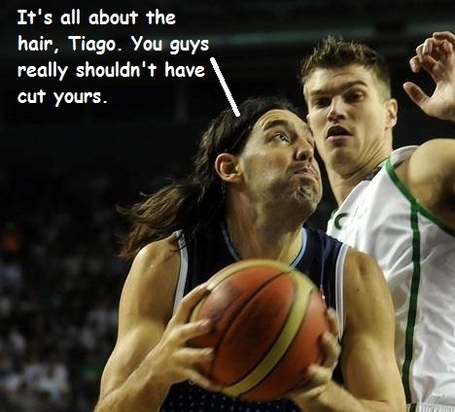 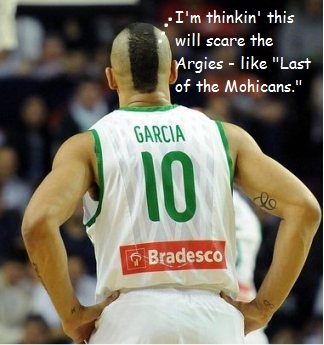 Photo from Jose Jiminez, FIBA Americas
Scola was chosen MVP of the tournament, and was joined on the All-tournament team by Manu, Huertas (BR), Horford (DR), and Arroyo (PR).

Argentina got off to an early 21 - 9 lead in the first quarter, thanks to Scola. He was matched against Tiago, and generally got the better of his former teammate in the Spanish league. 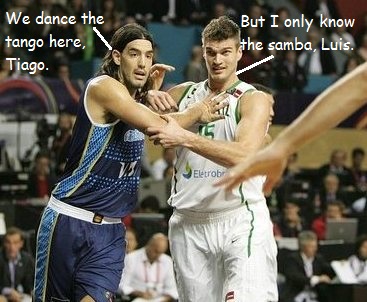 Federico Kammerichs started in place of Andres Nocioni, whose sprained ankle kept him out. Kammerichs snagged 5 rebounds in the first quarter alone. Before the night was over he would add 2 more, score 7 points, and block two shots. Before the game, he shaved his beard, leaving behind a heavy mustache, something he had promised to do if the team won a bid to the London Olympics. 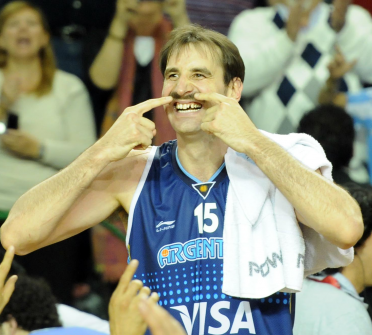 Fabricio Oberto contributed to the win tonight by giving Scola and Kammerichs some rest. Although he did not score, he grabbed 6 rebounds and 2 steals in 18 minutes of play. The question is whether the 36 year old will join the team in London next summer, but for now, he's very happy to have been a part of this team one more time. 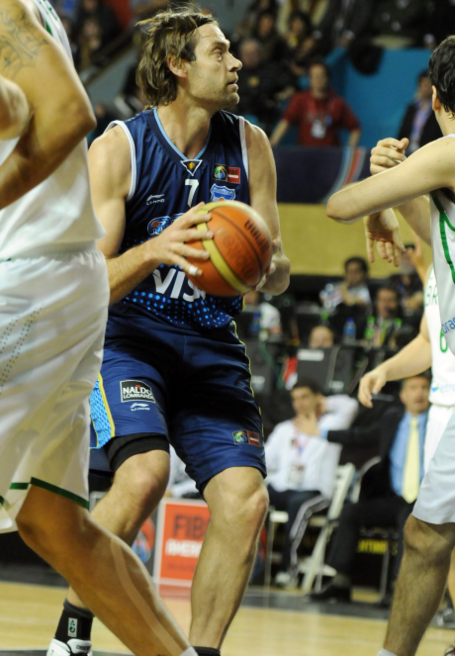 Manu had a quiet night, probably due to tired legs. The cut on the bridge of his nose opened up again in the second quarter. In the third quarter he hit his hand on the retaining wall around the court as he dove for an out of bounds pass, and had to have it tended to on the sidelines - I don't know if it was splinters or a scrape, but it didn't appear to be serious, and he returned without a bandage. He sported a nice bruise on his right knee, and in post game interviews, he appeared to have a small shiner under his right eye. Ten games in twelve nights just served to reinforce the nickname "El Contusion." But he still had plenty of energy to celebrate with his "brothers." 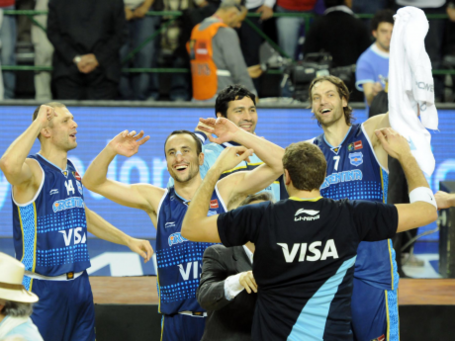 Even the mild-mannered, professorial Coach Julio Lamas joined in the celebrations after the game. 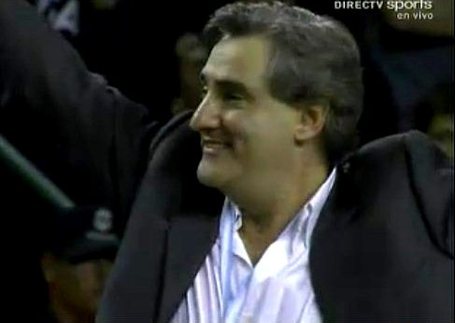 And celebrate they did in front of almost 9,000 of their countrymen. As they took the podium for the medal ceremony, they linked hands and stepped up in unison, arms raised in triumph. 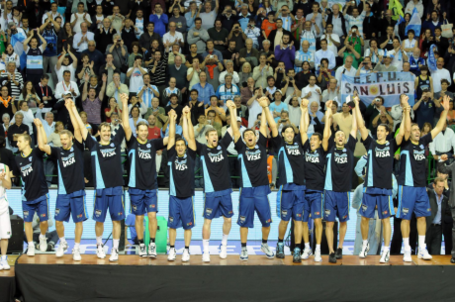 As team captain, Luis Scola received the championship trophy. The cut above his left eye was sustained in the fourth quarter. He admitted after the game to having felt some anxiety and pressure before the last two games. 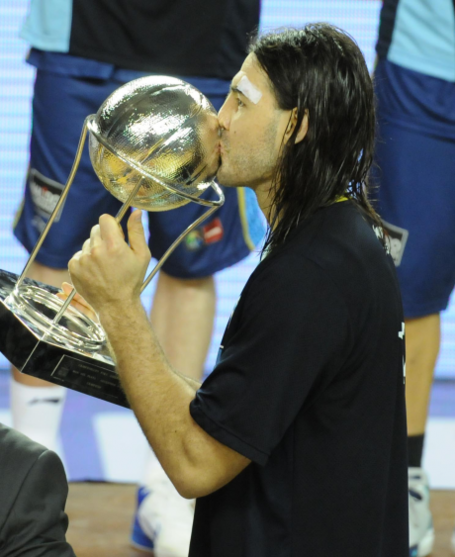 They cut down the nets after the medal ceremony, Scola at one end and Prigioni at the other, each supported on the shoulders of a teammate. Scola gave the net to Fabricio, who proudly wore it around his neck. 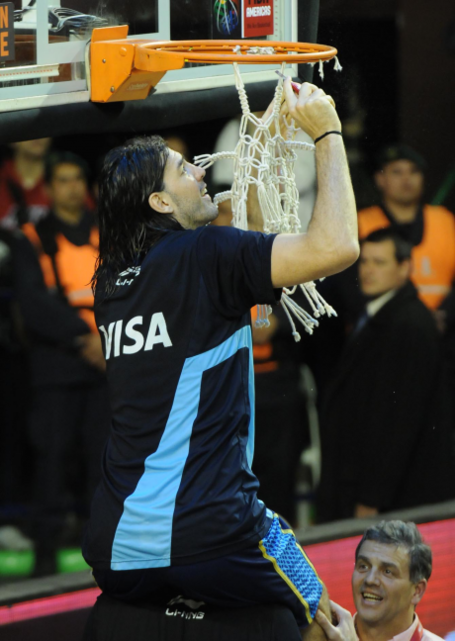 The players and the crowd, none of whom had left (well, except for the few Brazilians), joined in singing as confetti rained down on the arena. Champagne bottles appeared in players' hands, with predictable results. 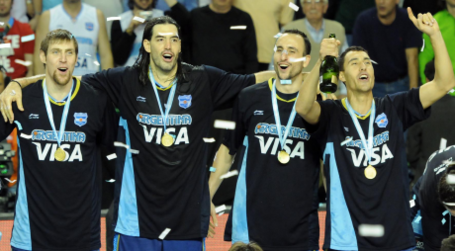 The shower of confetti became a blizzard, and the champagne bottles were used as squirt guns, and the singing and joyful celebration continued. 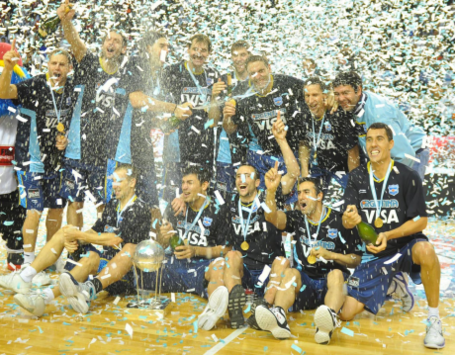 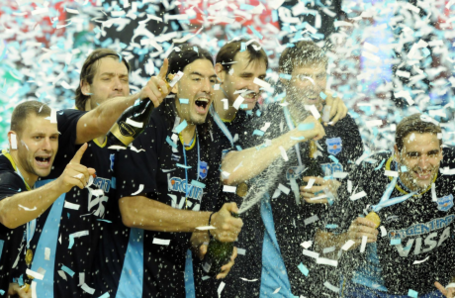 Both photos above from ligateunafoto.com

With Scola carrying the trophy and leading the way, the players danced a victory lap around the arena as the crowd continued to sing. After the victory lap, the players did a belly-flop slide across the confetti/champagne covered floor. They then went to center court and danced in a circle around the FIBA logo. Many of the children of the players then joined them on the floor, and I hope I live long enough to see Scola's four boys, Nocioni's 2, and Ginobili's twins become the Second Golden Generation. Upon returning to their hotel, the players climbed out through the escape hatch in the roof of their customized bus and stood on top, dancing and singing with the crowd that had gathered outside the hotel. (see the highlight link at the beginning of the post - Dancing on the Bus) 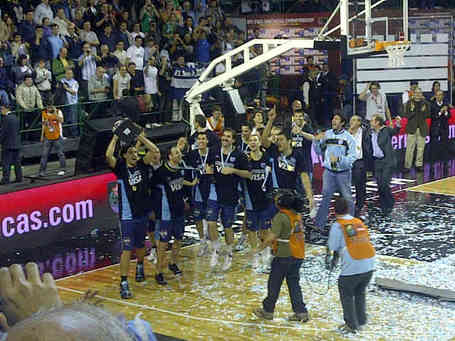 Watching all this unfold, I realized that this kind of celebration probably would not take place in the US for our national team. Such celebrations are reserved for NBA championships, but not for the national team. The fact that it all unfolded on Argentine soil was fortunate and appropriate - this group of men deserved to receive the outpouring of love, respect, and gratitude from their fans. I remember Coach Mike Krzyzewski writing about Team Argentina in his book about coaching Team USA in the 2008 Olympics - he wrote about the spirit and unity of the team as they stood in the hallway and chanted, awaiting to enter the court for their game against the US, only wishing his squad could approach that kind of camaraderie. He also wrote about encountering the Argentines in a restaurant after another tournament, long after Team USA had dispersed. The Argentines were dining together, many with their kids on their laps. They just seemed to hate to have to say goodbye to each other. Such is the brotherhood of the Golden Generation.