Uruguay to Argentina: "You Had Me At Hello"

Share All sharing options for: Uruguay to Argentina: "You Had Me At Hello"

Argentina put a first-half beat-down on Uruguay before letting off on the throttle in the second half. This one was over at the four second mark - Manu snagged the opening tip and raced for a thundering dunk, serving notice that the golden boys meant business. At the end of the half Argentina led 53 - 19 on their way to an 86 - 51 victory. 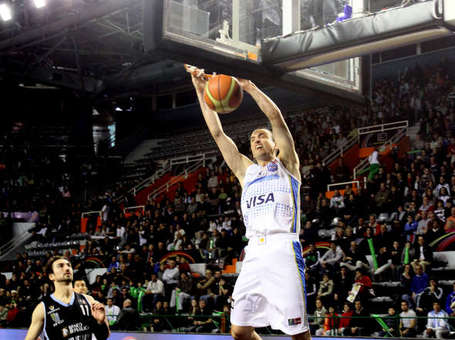 A few moments after the dunk, Manu raced back on defense to disrupt a two-on-one. Uruguay would not score until 4 minutes had passed in the first quarter. The Argentine defense was stifling - here Scola and Nocioni bottle up a helpless Uruguayan. 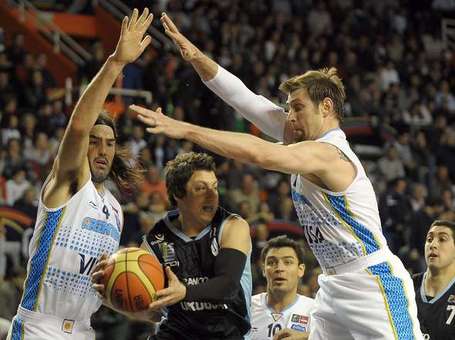 Argentina put on a clinic on how to drive and kick. They seemed to always be aware of where their teammates were on the court, eyes looking right past the defenders to find the open man. On one possession I counted eight crisp passes before a bucket in the paint. Uruguay must have been dizzy just watching the Globetrotter-like show. 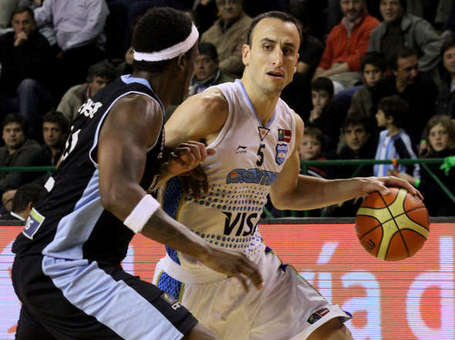 Luis Scola was once again the leading scorer with 18. Juan Gutierrez, starting for the injured Fabricio Oberto, had another good showing, scoring 16. Delfino, returning from injury, showed off his three-point shooting ability, often shooting from way behind the three-point line. Nocioni tallied 7 of 8 for 16 points. And no Argentine player logged more than 25 minutes of play (Manu only 16) as they prepare for a tough test on Friday against JJ Barea and Puerto Rico.