NOTE: Updated Wednesday morning with a couple of links to video highlights - see below

Arturo Alvarez, coach of Paraguay, was asked before the game if he had a plan to defeat Argentina. Yes, he had a plan: score the first basket, then send all five of his players down to the other end to hang onto the basket and block it for the rest of the game. Well, it took Paraguay over 3 minutes to score that first basket - game over by that time as Scola alone already had 8 points. Paraguay tried running various zone defenses against Argentina, but the crisp passing and movement on offense by the boys in blue negated any defensive plans. As for Argentina's defense, they forced Paraguay into taking bad shots, and Juan Gutierrez was a monster presence under the basket with four blocked shots, three of them in the first quarter alone.

Argentine Coach Julio Lamas was able to rotate his players in the second half, playing Scola, Manu, and Nocioni only about half the game. The crowd's favorite moment came in the third quarter: Argentina snagged a rebound, threw downcourt to Paolo Quinteros, who fired a behind the back pass to a trailing Manu - SLAM DUNK! You can see on the clock only 3 seconds have gone off the 24 second clock.

I just had to watch this several times. For his one shot, he looks like a kid again - Video of Manu's dunk 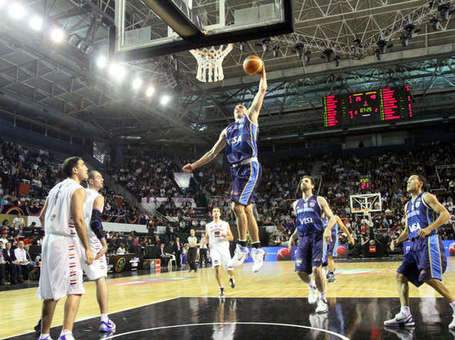 The arena was in full festival mode, with a 20 minute opening ceremony held just before the game - rock bands, acrobats, and presentation of the flags of the 10 countries represented. Confetti showered down on the players as they entered the arena, and some of it could be seen around the baseline during the game. After Manu's dunk, more fell to the floor off the top of the backboard. 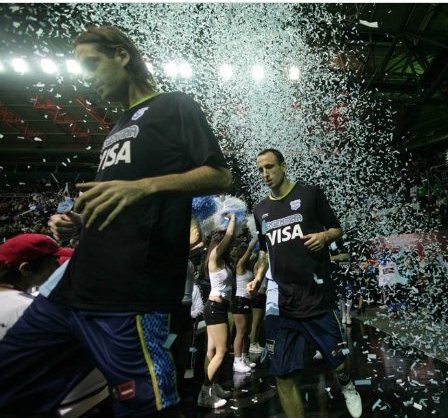 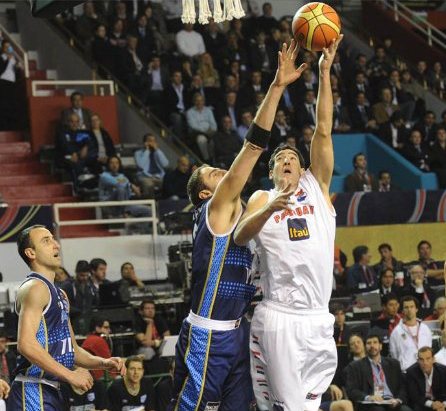 And so much for Paraguay's defense, the Ol`e zone (note that robo-cop brace on Martinez of Paraguay - Manu must have recycled his). 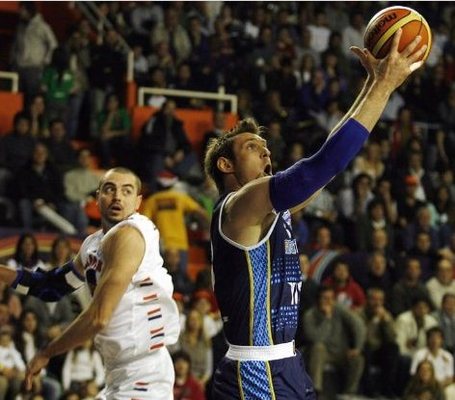 And this was Paraguay's "fly-by" defense - Manu so faked this guy out to get open for the three (and then missed it). 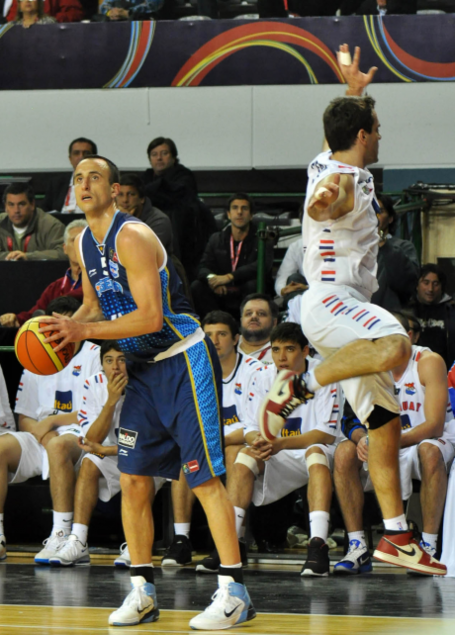 This one was an easy win. Paraguay was the last team admitted to the tournament, being admitted after Argentina received an automatic entry as the host team. Their goal is to win just one game, their first in such a competition. A friend who is a high school coach always reminds his guys that "it's a simple game: you dribble the ball, you pass the ball, you catch the ball, you shoot the ball, and on defense, you body up." Paraguay has the first thing on that list down, but needs to work on the rest. Their shooting was terrible (only 33%). Guys were passing up open shots to put the ball on the floor, only to run into the Argentine defense. They also were not good at using their bodies or the rim to protect their shots in the paint. Wednesday's opponent, Uruguay, will be a little better, and they've already faced the Argentines in a "friendly," so they should be beyond the stage of being in awe of the Golden Generation.