Yep, that's Luna - translate "moon" - which is where the boys of the Golden Generation seemed to be playing tonight. Displaying good effort on defense in the first half, Argentina was aggressive under the board and was constantly disrupting Venezuela's passing lanes (10 steals for the night). But on offense, they lacked precision. Playing without Andres Nocioni (as the coach took one last look at other players before making the final cut for the qualifying tournament), Argentina seemed to have a lot of "disconnected circuits" on offense. Manu's passes were so bad it prompted his brother, Leandro, to Tweet: "Sorry, Manu. I wasn't attentive and could not grab your recent pass." But, the boys in albiceleste and blanco were good enough in the end to take the vinotinto-clad (wine-colored) Venezuelans (most of whom were wearing long-sleeved Under-Armor shirts under their jerseys). 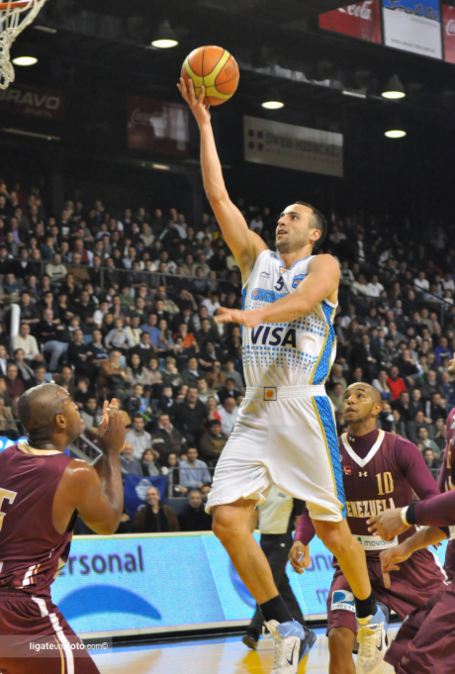 I watched this game on my computer, but due to problems with the Internet in the arena, I had no live stats, but an e-mail to the stats guy for CABB (basketball federation in Argentina) netted me postgame stats.

Up by 21 midway through the third quarter, Coach Lamas began to take a look at the guys at the end of the bench before having to make his cuts for the final squad to go to Mar del Plata. Venezuela clawed its way back into the game in the last three minutes of play as Lamas kept several of the subs in the game. They seemed to fall in love with the three-ball, without having the love returned. Manu found a couple of bursts of energy early in the fourth quarter, slicing to the basket on an in-bounds play for an easy two and then following the next time down the court with a hard, acrobatic, drive to the basket, getting fouled hard and contorting his body awkwardly on the landing. Earlier in the game, he had done a beautiful Manu-flop, skidding 10 feet across the floor from only a gentle nudge by Greivis Vasquez.

For you Rockets fans, have no fear that Scola has recovered from his knee surgery. His footwork around the basket was superb tonight, and he was a pain for Venezuela on defense. He finished the night with 22 points, with a couple coming on shots from outside the paint. 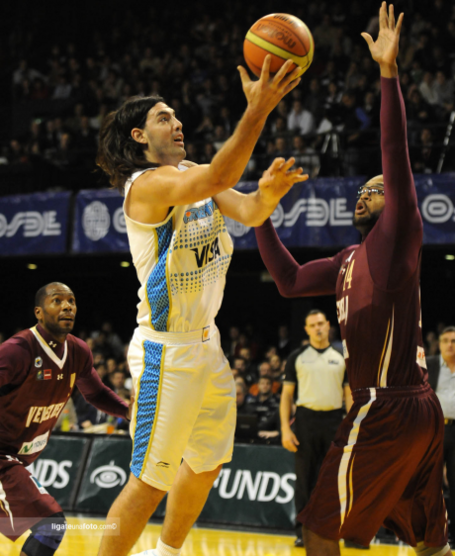 Another bright spot for Argentina was the play of Carlos Delfino, who was making three-pointers at will in the first half as Argentina took a 43 - 30 lead into the locker room. 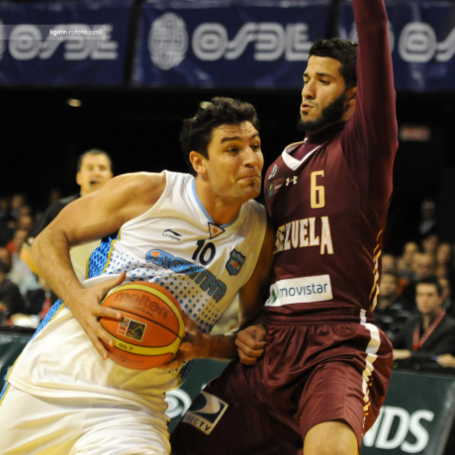 Luna Park in Buenos Aires, where the game was played, was built in 1934. It is said to be the place where Eva Duarte (Evita) met Juan Peron, and was the sight of the 1950 FIBA World Championships, won by Argentina. Several players from that team appeared in a press conference the day before the game. There was a celebratory atmosphere in the arena, and apparently several Argentine celebrities were in attendance. Dancers and acrobats entertained during timeouts, and at one point a young man did a back flip off the top of the backboard, dunking the ball on the way down. All I could think of was please don't give Manu any wild ideas for a shot! Manu tweeted before the game that he would be playing his first game in the historic venue. But that did not seem to translate into on-court enthusiasm for him. I've seen him play when he is not "feeling the game" and tonight was one of those nights. His stats for the night: 2/5 FGs, (0/2 3's), 5/8 FTs, 6 rebounds, 1 assist, 3 turnovers, and 2 steals. I think they are all ready to get on with the qualifying tournament next week, and may have been just a little tired of facing the Venezuelans for the third time in seven games.

Or could it have been the late-night Twitcam from the room of Manu and Scola that lasted until around 1:30 a.m.? I could only understand about every fifth word, but many of the guys had gathered in the room and were having fun like a bunch of frat boys, minus the "hooch." Most of the fun was as the expense of Fabricio Oberto, trying to convince a popular TV show (Macho Bus) to have him make an appearance as a male model. Fabricio has been recovering from a micro-tear in his hamstring, and today received news that it has healed so he will apparently be making the team for Mar del Plata, and that may have been the best news of the night.