Share All sharing options for: Manu Against Cuba: 22 minutes, 25 points

Argentina defeated Cuba Friday evening 80 - 67 in an effort that Manu called "very good in the first half, very weak in the second." 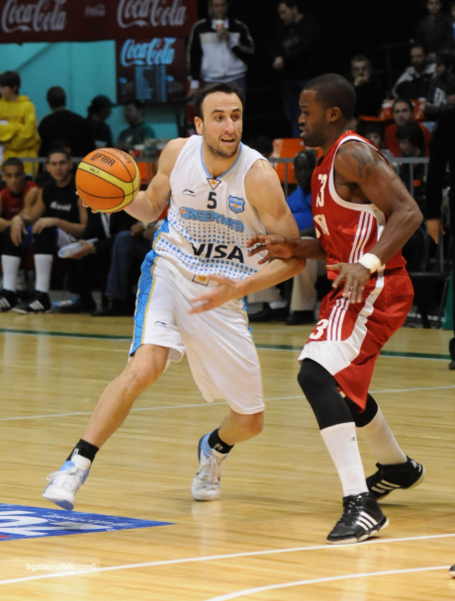 photo from ligateunafoto.com
Links to highlights are in the comments.

Manu played only about 22 minutes of the 40 minute game and was 6 of 12 (1 of 2 in 3's), 12 of 17 from the free throw line, and led all players with 8 rebounds. As best I can tell from the translations of game coverage, Cuba was a bit physical, committing 14 fouls against Manu alone. Luis Scola returned to play for the first time in four months, following arthroscopic knee surgery, and contributed 14 points in 21 minutes of play. Argentina led by as many as 27 in the third quarter before letting Cuba come back. Pepe Sanchez, returning to the team after a 5 year absence, played backup point guard and apparently had some nice assists, one of them an alley oop to Manu - Pepe and Manu played together since childhood in Bahia Blanca. Tomorrow, Argentina faces Venezuela, which is led by Greivis Vasquez of the Memphis Grizzlies.