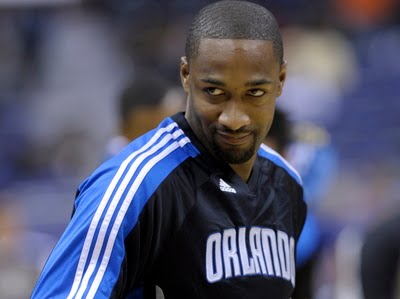 New York, NY- Orlando Magic guard Gilbert Arenas is on punishment until further notice as of Saturday evening, when he and a group of his cohorts were caught trying to sneak into the NBA. Forbidden from playing with anybody until further notice, the league offered only the curt response that the parents of Arenas, as well as those of Vince Carter and J.J. Redick, had been notified, and that it hoped the fruits of the rascals' behavior would not go unnoticed by any other potential troublemakers.

Though details surrounding the mischief have been scarce, rumor has it that Arenas was intent on getting a look at Old Man Stern's collection of basketball cards and other memorabilia. Stern, the crotchety neighborhood elder, has been reported to possess a veritable mountain of nicknacks despite the complete lack of evidence as to whether he even likes basketball. Though Arenas was immediately whisked away by his noticeably irate parents, who collected him while still dressed in their pajamas and robes, he was heard loudly asserting that "he had to do it" because Mavericks guard Jason Terry had triple dog dared him.

As the other remaining members of the ill-fated excursion waited for their own parents to arrive, light was slowly shed on how the evening's events had played out. Vince Carter had adopted the stance that neither he nor Redick had wanted Gilbert to do it, but had come along anyways, just to make sure that nothing bad happened to him. Clad in an oversized baseball jersey and coonskin cap, and with a diligently crafted slingshot hanging from his pants pocket, Carter was found to be disarmingly cute, if not entirely believable. He supported Gilbert's claims that the misadventure was begotten of a triple dog dare, before turning to console Redick, who had begun to cry in fear of what his parents might do to him when they arrived.

Leaving the two players alone, we turned to League Vice Principal Stu Jackson, who once again displayed his almost extra-sensory knack for smelling trouble and had arrived on the scene shortly after the local authorities. Sensing yet another opportunity to take the pulpit, Jackson announced loudly to the gathering crowd of neighborhood denizens that mischief makers would not go unpunished. "Let this be a lesson to each and every one of the slackers out there." He proclaimed, before stating to various members of the press that he had "always had a bad feeling about that Arenas kid" and wouldn't be surprised if he ended up in Juvenile Hall one day. Though Jackson didn't directly answer questions about the night's events, he assuaged the throng of concerned individuals, assuring them that he would redouble his own efforts to curtail the trouble-making efforts of the League's ruffians.

We turned away from Jackson's growing audience just in time to notice JJ Redick's parents arriving on the scene. Exiting the family Chevy station wagon with such haste that he nearly caught his nightshirt on the door handle, Redick's father rushed to his son's side and appeared to abandon all desire to punish his son when he saw him in tears. Though JJ was nearly unintelligible from beneath his sobs, Carter stood by his friend and explained everything to Redick's patiently understanding mother, who nodded at each and every assertion that neither he nor JJ had wanted to tag along with Gilbert. Though each parent received the claims with an air of practiced caution, they appeared to have a revelation once Carter assured them that Terry had indeed dared Arenas to do it. "That damn Terry kid's parents just let him run wild in the streets." Redick's father announced to no one in particular, before turning toward us. "He just hangs out at Higgins' Pharmacy all day, stealing candy and trying to look up womens' skirts. And of course he's not here now." He shouted, waving his arms in the air. "Somebody needs to give that damn kid a taste of his own medicine."

As Redick's parents ushered JJ and Vince into the car, they were interrupted by Tiago Splitter and Tim Duncan, who had come running from down the street, wondering aloud what had happened. Duncan broke through the crowd while announcing that he had seen everything from his room via the homemade periscope he had constructed from shaving mirrors and Ritz boxes. Splitter, who'd been spending the night at Duncan's house, couldn't claim to having seen anything, though he did assure onlookers that he had been in the middle of making "the ultimate hot wheels track."

Though Arenas remained indisposed at the time we went to press, both Redick and Carter were seen riding their bikes in the safety of the neighborhood cul-de-sac the next afternoon, firmly in agreement with one another that it would be the last time either one of them tried to sneak into the NBA. After witnessing their contentedness with life after Duncan firmly affixed baseball cards to their rear spokes, we found ourselves inclined to agree.