The young Latvian Davis Bertans, 18, was selected by Indiana Pacers in the 42nd position on the Draft this year, but was involved in exchange for guard George Hill and ended up having sent his rights to the San Antonio Spurs. He is considered by specialized websites, the best shooter of the last Draft, and was compared by many to German Dirk Nowitzki. 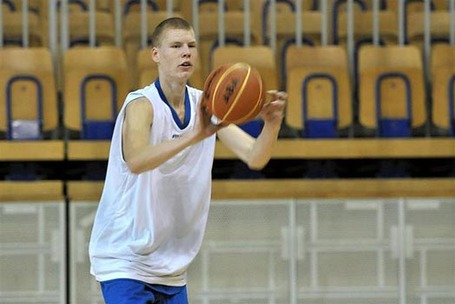 After spending his short career moving between teams of his country - the last was the BK Barons Riga - the player moved to Union Olimpija Ljubljana, in Slovenia, and, meanwhile, had few chances to show your basketball.

Bertans led Latvia to bronze medal at the European Under-18 Championship in 2010, being chosen for the ideal team of the tournament. Participated in this year's FIBA U-19 World Championship, but couldn't repeat the good performance and ended only in 10th position.

By the press department of the Latvian Basketball Federation, the Spurs Brasil had the opportunity to talk with Bertans by email. Check the result of our chat below. 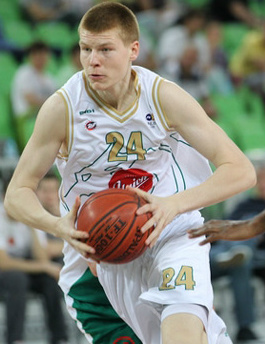 Spurs Brasil - How was be selected by Indiana Pacers, and then be traded to San Antonio Spurs on the Draft day? Are you happy about your position on Draft?

Davis Bertans - I am really happy that I ended up in Spurs, because it's a really good team, with a great coach and they have a pretty big experience with international players. For me, at the end it didn't matter if it is first or second round, the main was to get in a better team and that happened, so I'm really happy about that.

Spurs Brasil - Did someone from the Spurs staff already get in contact if you? Do they want to do some specific workout with you?

Davis Bertans - This is a question what you should ask to my agent, because lately I was really busy with the national team... As far as I know nobody from Spurs can contact me as because of the lockout.

Spurs Brasil - What aspect of your game do you think you need to improve more?

Davis Bertans - The main thing I have to improve is defense. During a couple of years, from a junior team player, I have to become a senior team player, and the biggest improvement that has to be made is on defense. Also, I have to bulk up, so I could be strong enough to play on defense against stronger guys and attack the basket in traffic. And, of course, I still have to improve my shoot, so I could make it more stable.

Spurs Brasil - What is your favorite position? Because we saw the specialist sites reporting you as a Small Forward, but you played a lot of time for Latvian U19 team as Power Forward or as Center.

Davis Bertans - My favorite position is Small Forward. I played in U19 as a Power Forward because it was needed. Our team didn't have enough tall big guys, as I was the tallest, I had to do it for my team. But I think that in future when I will get stronger, then probably I will have to play either a SF and PF.

Spurs Brasil - How was to be transferred from BK Barons Riga, a team from your home country, to Union Olimpija Ljubljana, from Slovenia, in the middle of season? Was it hard to adapt in a new country?

Davis Bertans - I was really excited to go to Ljubljana because it's a good place for a young guy to improve. Of course the transfer was hard and complicated because of many documents, and it was the reason I didn't play for 4 months. In February everything was done well and I got the Letter of Clearency, so I started to play in Olimpija. It wasn't hard to adapt in Ljubljana, because the city is similar to Riga. The only thing was language, but in the team everybody speaks English so it wans't a problem. And also I'm slowly trying to learn Slovenian.

Spurs Brasil - What is your expectation about the next season, when your team going to play against great squads like FC Barcelona Regal and Montepaschi Siena on Euroleague?

Davis Bertans - First of all, I'm really excited that I'm going to play in Euroleague next season and even more excited that it's against teams like Barcelona and Montepaschi. I know that our team will try to win in every game, like they did it last season.

Spurs Brasil - How was for you represent Latvia on U19 World Championship in your "home"? Do you want to play for Latvia on this year EuroBasket in Lithuania too?

Davis Bertans - It was really great, because we started the Championship in Valmiera, which is my birth place, the gym was always packed and it felt great. It is always fantastic to play for a crowd which is always cheering. And of course I would like to play for Senior national team in EuroBasket, because I'm always happy to play for Latvia.

Spurs Brasil - What is your message for Spurs fans on Brazil and all over the world, who want to see you soon playing with the silver and black shirt?

Davis Bertans - For Spurs fans I can say that I will work as hard as I can to become the best I can be. I will do my best to get in Spurs rosters and then to help the team.