Share All sharing options for: Ginobili Initiates Lawsuit Against Apple Over Incessant Autocorrect. 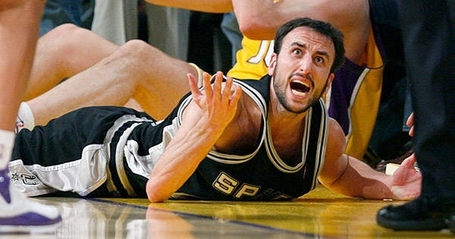 With the NBA heading toward a league-wide lockout this week, many NBA players are taking advantage of the impending free time by scheduling extra vacations or changing their names to political statements in order to stoke their own jersey royalties. With limited time available before his international schedule begins however, Spurs Guard Manu Ginobili has begun filing preliminary paperwork on a lawsuit indicting Apple over the constant auto-correcting of his name by the company's best selling products.

A native Argentinian, Ginobili informed reporters that initial instances of the spell-checking gaffe were initially discovered by his teammates, who in turn informed him. "It's important that my fans know first and foremost that I'm not like, constantly typing my own name all the time or something." Ginobili offered in his charmingly broken english. "It's just that with my twins being such a priority in my life, I have to protect any business opportunities that might arise, even in the long term." With his complaints stemming from a valid concern, but with further details of the suit being scarce at this early stage, reporters turned to fellow members of the Spurs to help shed light on the issue.

"It's kind of annoying to have to go back through a long text whenever the spellcheck turns his name into something like, 'Mano Generosity' or 'Manly Gunpowder' or whatever." Spurs forward Matt Bonner sympathized. "You'd think that with the way technology has made us such a global society, that wouldn't be an issue." Bonner then added that having to grow up with a last name like his, he could understand where Ginobili was coming from. "The boner jokes were annoying until I grew some. Then everybody realized how hard it'd be to be popular in school after they got beaten up by the giant, redheaded, freckly faced kid." Bonner said with a smile.

As we left the locker room, we crossed paths with Tim Duncan, who asserted that the technology still had a ways to go before it could keep pace with the actual idea behind the oft-annoying feature. "The program is predicated entirely on what word or words the software decides you were trying to type in the event of a misspelling. It's rather brilliant in theory." The veteran power forward informed us. "Unfortunately in Manu's case, the device's artificial intelligence just thinks the user is trying to say something else. It took me about five or six tries when I tried to text one of my friends that I'd just found a Helvinian Dragonwyrm in a pack of Magic: The Gathering cards." Duncan added, before being pushed out of the way by an attention starved Tiago Splitter, who begged us to ask him something before informing all within earshot that he needed to practice interviews for when he was finally allowed to play.

Attempts to reach Apple Representatives were initially difficult, with many company correspondents suggesting that we contact the tech support hotline if we were experiencing trouble with our iPhones or iPads. Undeterred, we pressed until we touched base with analyst who agreed to speak under the condition of anonymity. "Truth be told, we've been dealing with this kind of blowback for awhile now, and I can completely sympathize with Manu." He told us, before mentioning that Zaza Pachulia and Zydrunas Ilgauskas had once become so irate with the same problem that they had actually made the trip to Apple's corporate headquarters to complain. "It was crazy." The analyst said, remarking that having two gigantic Eastern European guys screaming at people in the lobby reminded him a lot of that scene in 300 where the Persians sent out that gigantic grey monster. "They pretty much just held up their iPhones, pointed and screamed at everybody, and flipped over like, four or five cars in the parking lot. It was wild."