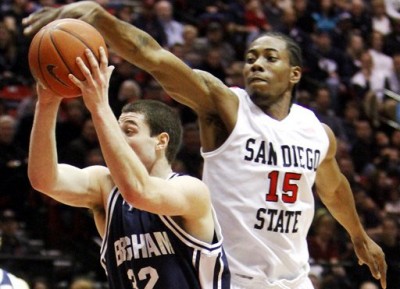 If basketball is anything like the stock market, you'd have to think that San Antonio getting the draft rights to Kawhi Leonard, the 15th overall pick in exchange for George Hill, the 26th overall pick in 2008, was a payoff. Despite the Spurs giving up a fan favorite, my initial reaction is that Leonard's particular style of defense, and his commitment to it, represents a desire by the Spurs to make a move toward the team oriented defense that was the calling card of each of their championship runs.

Though I can't admit to watching more of Leonard's games than the two he played against BYU (which were nationally televised), a brief perusing of the good old Internet brought up a lot of source material that I was able to use in order to get a better glimpse at the style of play Leonard prefers to play.

Though various draft sites mark Leonard as a serviceable offensive player at best, the general consensus is that his draft stock is based entirely on his willingness to hustle to and defend against the basketball. Though your standard YouTube era highlight reels tend to focus on the crowd pleasing aspects of basketball, the videos I was able to unearth showed a Kawhi Leonard who, at 6'7" and 230 lbs, spent most of those highlight reels getting to the basket with a handful of go to moves. Though the aforementioned draft sites were all quick to point out his relatively low points per possession among fellow wing players, Leonard's 15 points per game indicate, to me, that he's a player who knows that his own hustle will eventually get him the looks he wants and needs in order to score. To me, that represents a player who has the intelligence required to play within himself. That said, hopefully he'll be able to adapt his offensive game to the NBA defenses he'll shortly be forced to deal with. As you can see here, he already possesses an awareness and work ethic towards accomplishing that goal

Defensively, Leonard seems to outshine the contributions he makes on the offensive side of the ball. A large framed player with a long wingspan(7'3") and startlingly large hands, he has the ability to disrupt passing lanes and get the ball back into transition. Several scouts have remarked that Leonard is, at times, over-anxious to do so, as he has a tendency to gamble for the steal which can allow opponents to grab an easy basket here and there. Hopefully, if Leonard can make a long term home for himself in San Antonio, working with the Popovich coaching staff, one that is committed both to discipline and defense, he'll learn precisely when and where to make those gambles, and defending off the ball more efficiently.

Though draft sites have remarked that Kawhi will amount to a Shawn Marionor Luc Richard Mmah a Moute in respective best and worse case scenarios, I was more interested in what one scout said when he noted that Leonard is a player who seems to be innately aware of the fact that, despite the effort he puts into developing his offensive game, his greatest opportunity for success in the NBA are the strengths he possess on defense and in rebounding the ball. The player that was named when that observation was brought up: Dennis Rodman.

From my end, while I know Kawhi has a ways to go if he wants to be mentioned in the same breath as Rodman, the fact that multiple sources have cited that awareness towards the opportunities his defensive hustle can bring him, is promising in the least. I've always held a particular affinity for players who play towards the strengths they do have when they might be lacking on the offensive end. Though not everyone in the NBA is equipped to score in bunches, those who possess that awareness of their game are the ones who stay in the league long enough to mold their offensive abilities into an asset. With Leonard already putting in the work to make strides in his outside shooting, an area where scouts unanimously felt was in need of improvement, Spurs fans naturally bring to mind another 6'7" player who hounded opponents with his tenacious defense and patiently developed outside game.

With that being said, it bears mentioning that, here on PtR, we like giving nicknames to our players. Though a few were initially tossed around as preliminary possibilities, I'm making an executive decision and pulling the trigger on the one I feel works best. With a name that brings up images of the Hawaiian Islands (his name does rhyme with the place...), it is without further ado that I introduce the newest member of the San Antonio Spurs.