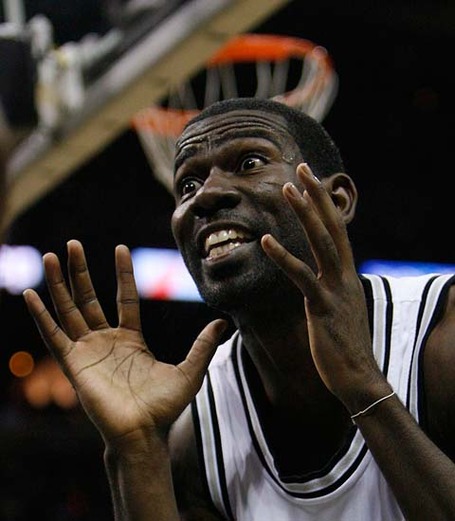 Unlike the first time in which Finley was confused with a member of the walking dead(in a San Antonio area HEB), this latest incident caused even greater amounts of blow-back, due to the more public nature of the circumstances. Robert Willoughby, 27, who was on hand to witness the arrival of the newly crowned NBA Champion Dallas Mavericks, caught up with reporters on the scene and offered his accounts. "Well, it had been a long time since anybody around here had seen Fin. He left for San Antonio back in 2005, and then we all just kinda lost track of him. It kinda startled people when he just showed up like that." Offered Willoughby, referring to the rash of looting that immediately took place once several members of the Dallas public conferred in a panic and decided that the zombie apocalypse had begun in earnest.

Unaware of the commotion his appearance sparked, Finley opted to walk from his hotel to the nearby American Airlines Center, leaving a trail of startled abandon in his wake. Several witnesses corroborate that motorists were quick to leave their vehicles in the ensuing traffic jams, and that a quickly growing number began smashing the windows from neighboring merchants, taking what they could in the event that civilization ceased to exist. A member of the looters, speaking under the condition of anonymity, expressed frustrations that there were no nearby gun stores to pilfer, but also lamented the fact that stores had not yet stocked the new Mavericks Championship merchandise, saying "It's just a shame, that with the fabric of society collapsing on itself as we speak, people might not remember that we finally won a damn championship around here."

Though unrest and disorder spread quickly, onlookers noted that the Dallas Police were of little help initially, with some even partaking in the mayhem themselves. Sergeant David Mayhew, 42, indicted several of his officers in the events, though he was quick to defend their actions. "Well, on the one hand, we had Gutierrez here, thinking there was some kind of genuine zombie plague going down. He's got a family, so who am I to say what's right or wrong in that situation. On the other hand, we got O'Grady, who pretty much just lets everything slide, 'cause he seen them riots they had back in Detroit when they won the whole thing. He don't wanna get in the way of anybody's fun. I mean, you ask me, nobody's really in the wrong." Our interview with Mayhew however, was cut short as cameras caught him running off to join several other officers in the pillaging of a sno-cone stand.

Inside American Airlines Center, we caught up with Mavericks forward Dirk Nowitzki, who offered his take on events. "Everybody been in a great mood understandably, winning the Trophy and all, so when we arrive back here and make our way into the locker room, and just see Fin waiting there for us, we all kinda lost our cool for a second." Nowitzki stated, wiping off the Bill Russell MVP Trophy, which he had used to fend off Finley's initial approach, just in case "anything went down." Providing a little bit of history toward Finley's oft-confused state of composition, Nowitzki entertained reporters with an anecdote recalling a stretch of games back in the early 2000s, where former players Shawn Bradley and Evan Eschmeyer refused to practice pick and rolls with Finley in anything less than full warm-ups, just in case he tried to bite them.

Other Maverick players who participated in the brief locker room scrum were quick to defend the actions of both themselves and their teammates, with center Tyson Chandler alleging that in these particular situations, "it's simply better to be safe than sorry", before turning to DeShawn Stevenson, who offered praise for Chandler's "dope-ass leg drop". Shooting guard Jason Terry however, was still in the act of being restrained by little used reserve Ian Mahinmi, who attested that Terry led the initial assault, landing five or six punches below Finley's belt, with at least four coming after it had been ascertained that Finley was, in fact, a real person. "Beef don't rest, son! What!?" Terry shouted from behind the arms of Mahinmi, likely in reference to the brief on-court scuffle in which he and Finley participated back in the 2006 Conference Semis, in which Terry was seen either punching or maliciously groping Finley below the Mendoza Line. As Terry calmed under his restraint, he muttered something about "taking his talents to South Beach" again on Finley, if the opportunity ever arose.

We were fortunate enough to catch up with Finley himself, as he sat on a stability ball beside owner Mark Cuban in the Mavericks state of the art training facility. Cuban, who continued his relative quiet spell to the media, told us simply that he too had assumed the worst and had rabbit punched Michael no less than three times, all of which came in the name of safety. Cuban then climbed aboard his trusty StairMaster, seeking to "burn off the rest of the adrenaline." No stranger to the ever growing number of scares he's instigated, the increasingly wary Finley claimed that while he was understanding of the public's need to defend themselves in such an event, that most people were "way too quick to jump off on some Resident Evil tip." and wondering aloud why similar incidents had not befallen active players like Joel Pryzbilla or Greg Oden. Frustrated, Finley quickly changed the subject, once again praising his former team's recent accomplishment, before adding that he was still "wet with the outside J", and was ready to suit up for a contender.