Lebron James And Our "Real World"

Share All sharing options for: Lebron James And Our "Real World" 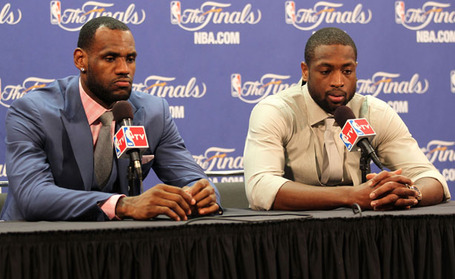 As both James and Wade sat, rapidly searching for answers to the questions the press were asking them, there was an almost palpable sense of desperate frustration hanging over them. Trained over the course of the season to answer such questions as standoffishly as possible, the duo seemed finally to show the cracks from a season's worth of prodding and examination. Whereas back in November, or even in March the two were easily able to deflect the attention raised by those questions to the fact that the goal was "to win a championship", they each instead found themselves in a place where that time had simply run out. Rather than remaining on the court to celebrate a championship with their fans, James and Wade were relegated to having to answer the same questions they'd been asked for the better part of the year, while hearing the cheers from the Dallas Mavericks just a few rooms away.

As those cheers carried through the walls and hung just audibly over the words of the reporters in the room, both Wade and James seemed finally either unable or perhaps unwilling to answer to their examiners. After a couple of questions in which the two looked to one another after nearly awkward pauses before answering, James fielded yet another question about the ever growing populace that considered him to be the villain that the very same media had originally suggested he was. Taking another brief moment, he offered a response which hung in the air long after he'd given it.

"They can get a few days or a few months or whatever the case may be on being happy about not only myself, but the Miami Heat not accomplishing their goal," James said. "But they have to get back to the real world at some point."

As those words hung, people everywhere listening in began to get the sense that perhaps James had intended for his answer to mean exactly what it seemed like, that he's a rich man that will continue to be so long after this season's fire had died down, and that nearly every single one of his supposed detractors is not.

In an age where nearly everything a person, let alone a celebrity of James' stature, can and will be misinterpreted at times, the first response to a statement such as this is to tread carefully and simply assume that it came out wrong. If we're so used to the notion that something can be taken differently than intended, that alone can add another layer to James' retort without a need for any further clarification from James himself. I however, was not the only one to take the response this way, as ESPN's Calvin Watkins had a short article up within minutes of the utterance leaving James' lips, comparing it to a similar utterance that Tony Romo had once offered to the media after a particularly frustrating Cowboys loss.

It goes without saying that professional athletes will spend their careers making amounts of money vastly in excess of that which their fans will make. For us, that's as much of a foregone conclusion as death or taxes, but one in which we perhaps willingly trade that for the enjoyment they can provide to us in return. Though most would be fairly quick to concede that these athletes are capable of doing things which we can match only in our wildest dreams, there comes with that admission a fine line that, like many other things that cause frustration, we don't wish to have our faces rubbed in it. James, in what was perhaps an actual fulfillment of the role which was handed to him last summer, crossed that line if indeed he meant what he intended.

While I want to stress that I am not trying to vilify James and insist that if one does so, they are doing it for their own set of reasons, I do think it's equally important that James realize that he is at a fragile point in his career. Public perceptions tend to vary so wildly at times that to even take an average of the differences as they occur over time can be misleading. Kobe Bryant's own legacy would be a testament to that, as he's been the recipient of several labels over his career, with only some of them being directly created by his actions. Though James is primed to receive a healthy and well warranted dose of criticism over the next few months, as the lofty expectations surrounding him decree, he needs to approach the situation as carefully as possible. When people are already prepared to dislike or be angry with you, it takes very little to help them continue along that path.

James will be forgiven for his inability to to win his first ring in the season of 2011, but the manner in which he failed to do so will remain heavily scrutinized until he's able to make good on his own promise. From strictly a basketball standpoint, this is completely fair. His counterpart in these finals, Dirk Nowitzki, played the vast majority of his career with several stigmas hanging over him like the dark clouds which eventually passed as these playoffs transpired. One of the things which has been kindest to Nowitzki in the long run however, is the fact that he's been gracious and relatively subdued, especially compared to James' actions of the past year. With that taken into consideration, it's only natural that as he exercised his on-court demons, he's left with a relatively sparkling public perception as well. James, generating the bulk of animosity toward himself before any games had been played, will have a much more difficult time, even if he does end up winning as many championships as he predicted. This latest barb will only add to the pile he'll have to climb in order to reach those good graces.

It goes without saying that a large contingent of the public views these athletes as spoiled and overpaid prima donnas, a label to which many contribute and several seem to wear proudly. With that taken into consideration, I don't feel that James is a member of the latter group. I feel that he does want to be liked, but is frustrated at his failure to do so, and is showing it the only way he knows how, though for many, the damage has already been done.

On his worst day, James is a spoiled, overpaid brat that's done a considerable amount of damage to his public image. On his best day though, he's still acting like a kid. In spite of the fact that he's been coddled and placed on a pedestal for most of his existence, the mistake that we make as a viewing public is the assumption that with money and fame comes maturity. It's completely OK for James to be even outwardly frustrated at the way things transpired, but we shouldn't expect tactful diplomacy from him any more than we should expect it from any other high school kid, which is the fruit that his decision to skip college has borne. In that light, it's unfortunate that he feels the need to sandbag like he does, because there are certainly better ways of doing it, even after climbing atop a hydraulic lift and announcing your own presence to the world.

Though it was said as James prepared to enter the NBA Draft that it was a good thing he was choosing as he did, as any decision to attend college would likely have been for the wrong reason (speaking solely in terms of the likely massive amounts of NCAA violations that wouldve accompanied a full tenure of recruiting), it can't be argued that college would've done him some good. At the very, very least, he would've learned a bit how to deal with the zone defense that Dallas used to flummox him throughout the Finals. At best however, he would've likely learned to conduct himself in a manner more professional and more mature than his current abilities allow him to. College, if nothing else, is an arena in which one learns to conduct themselves with even a modicum of those traits, free from the consequences for which one has to pay when they misstep in the very same "real world" on which James pontificates.

And has yet, as of last night, to live in.