My friend Jake sent me a text this morning.

"If you ask Lebron for a dollar, he'll only give you 75 cents, because he never gives you the fourth quarter."

While that was a bit of my old "sports superstition" dictating what was said, Jake soon replied that he harbored the same idea, though for him, a longtime Mavericks fan, it's likely more of a fear than anything else. 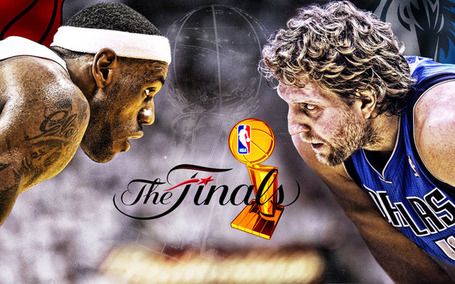 Fear that real life never seems to be as agreeable with the Good Guys as those old stories were growing up.

As what is seemingly a benefit of having my team knocked out of the playoffs, I've paid more objective attention than I perhaps normally would. I'm able to see the games for what they are, with little of my personal allegiances managing to get in the way. Though I am admittedly pulling for the Mavericks to find their way through what remainder of these woods still exists, it's far from being the life or death struggle I felt like it was in 2005, when Detroit about gave me a heart attack as they pushed my Spurs to seven games before finally slipping away into the night. Instead, I feel more as if what's transpiring between the Mavericks and Heat takes on more of a literary definition of an epic conflict, what with the Heat falling into the public perception of the villain's role, and the Mavericks suddenly becoming the new, and last hope.

As both teams find themselves after five games have been played, the Mavericks stand one win away from their first ever NBA championship. That one win though, must come in Miami, in front of an energizing crowd that perhaps knows better than their own team that the backs have been placed firmly against the wall. While I want to believe that, under the helm of a vengeful Dirk and veteran Kidd, the Mavericks will not let the moment slip away, I have to say that I can't say it with one hundred percent conviction, which is probably fitting, because I couldn't say I predicted a Mavericks win with equal certainty after the Finals matchup had been set.

Though Dirk remembers the sting of the 2006 Finals as they were ripped away from him like a band-aid from a fresh wound, I have a the strong feeling that the last two games will transpire beyond his own contributions, if not completely in spite of him. Over the last few games, the scrutiny has been solely on the shoulders of Lebron, almost as if he's more responsible for the three Maverick victories than are any combination of the boys in blue. Though Dirk has been given the credit of playing at a transcendent level, the tone of voice carried by the collective media is almost as if he's stolen these victories away in the night while Lebron has slumbered, and that no form of assault from Dirk and Co. is enough to withstand the might of a fully fledged Lebron-slaught. Perhaps that's just me playing the devil's advocate with myself, all too wary of the capabilities of the other team, or perhaps maybe everyone is right.

During the first three series in which Lebron played, he manifested himself as sort of a ticking time bomb in almost each and every game. It wasn't a matter of "if" he would make a big play, but "when". In each of those match-ups, he delivered. His crucial bombs and dunks seem to overwrite the collectively solid contributions he had already made in each game as if they were worth more than simply the two or three points they registered on the scoreboard. In those games though, they were. His backbreaking three pointers during crunch time in games against Boston and Chicago took the winds from those teams' sails in an almost palpable sense, and James himself seemed almost cybernetically effective during those moments. Fast forward to the Finals however, and he seems dormant.

Though Dallas has been effective in roping James at times throughout the first five games, he's as much to blame as the Mavs are due for credit. He's gotten open looks, though the shots have been long, and he simply hasn't managed to convert. What leads me to think that James is due for a breakout though, is the fact that high output scorers like him only need to make one basket before their confidence shoots back through the roof and the floodgates fall open. I know I'm not the only one to think this though, because like I said, the collective tone in both the spoken and written word of the basketball world suggests as much. James is one of those players that, for all his talents and abilities, will eventually have a big game almost in spite of himself. 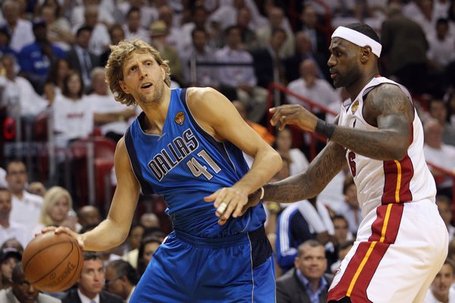 On the other side of the ball, the Mavericks have played well enough to where one could argue that if they shouldn't have already won the series, they should at least be up 3.75 games to 1.25. The only game in the series that had washed away all reasonable hope of Maverick victory by the end was Game 1. Other than that, and aside from the last few minutes of Game 3, the Mavs have done everything they've needed to do, and in revelatory fashion. They've shown both growth and maturity as a team that has come a long way from the eager to collapse Mavericks of the early millennium. During each of their wins, they've had stretches of adversity during which previous Maverick teams would have simply folded without a doubt, and yet this current team has been able to weather the storms and stay the course. If it weren't for the fact that most of these storms were generated through their own play however, I'd have no reservations about feeling confident in their ability to win.

While analysts and pundits everywhere are quick to remind the viewing audience that the Heat have the best defense in the league, I've never felt as if it's one that the Mavericks haven't shown to have complete and utter control of at times. They've managed to go on several lengthy runs during each game, which means that they have control of the looks they can get Miami to show them, and Miami conversely has been unable to stop Dirk. What keeps these games close though, is not the fact that Miami is running over Dallas on the offensive end, but the fact that Dallas will make these runs, whether to get back into the game, or pull away from the Heat, and then follow up with consecutive bad possessions on either end of the ball. During these Finals, I've seen both Jason Kidd and Dirk Nowitzki either throw the ball completely away, or simply make a bad pass. While neither one is a perfect player, immune from making mistakes, the fact that they are not the players who "should" be making these mistakes is what stands out. It's almost like when a parent gets mad at the older child for making a mistake they would've expected the younger one to make. Game 3 was lost on such errors, and each of the last two Maverick victories have narrowly moved through such mistakes in order to occur. Like Lebron and his sleeping giant offense, it's only a matter of time before things like this affect the outcome of the game and, with only two games left, the series.

Moving back to Miami for the final two games, I assume the thoughts held by the majority of people, that Dallas must win Game 6 in Miami, and it's third straight in this series. Although it's most definitely easier said than done, it's without a doubt an easier task than winning a Game 7 on the road, which just doesn't happen all that often, and never, to date, in the Finals. Though that's not to say the Mavericks aren't capable of doing so, the part of me that thinks they wouldn't is the part that knows the history of the Mavericks all too well. Deep down, I know that Dallas is assuming a "Win Now" mentality, and have displayed as much in the moxie required to push the Heat this far. To that end, it would literally be tragic if the Mavericks were unable to push the Heat that very last inch, and over the cliff. With this Finals having already taken on a mythical storyline, having the team widely seen as "The Good Guys" come this far and not win would have as equally far reaching implications for perception of the NBA as a Miami Championship would for the league itself. 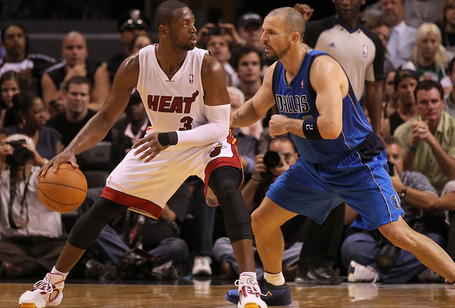 I feel like what unsettles me the most about this final showdown, is the fact that Dallas has shown they are the better team in all but one category. Aside from their mental mistakes at bad times (I'm not going to lie, they've come at awful times), they've managed to hang with and outclass Miami at every turn, the calling cards of veterans who have been there and done that. The ticking time bomb that is Miami's sheer athleticism is what casts a shadow of doubt upon my own outlook. It's like the last scene in "He Got Game", where, for all of Denzel's smarts and own considerable ability, he eventually succumbs to the wearing effect of his son's youth. In that movie, Jesus Shuttlesworth didn't win because he was a better player, but because his young legs sent him on a run with which the older Jake Shuttlesworth couldn't keep up. Thus far, Dirk, Jason, and the host of other vets on the Mavs have stymied the younger, not necessarily more talented Heat with their smarts. They've seen all these tricks before, but it won't come down to whether or not they know what's coming, it's whether or not they can wrangle it when it shows up, and I feel it hasn't fully reared its head yet.

For all of the connotations that can be made between this Finals and the classic hero tales of old, the fact of the matter is that the hero wins despite the innumerable odds from the face of the villain. Were this a story and not real life, I'd breathe easier and know that, for all of the plot twists potentially still lying in wait, that justice would be served in the end. In the real world though, it's never quite as forgone a conclusion. Though poetic justice has the Miami Heat backed against the edge of a cliff, nobody here would be all that surprised if, like all those comic books we've read, they live to fight another day. 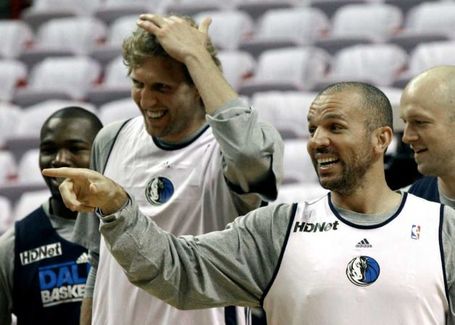