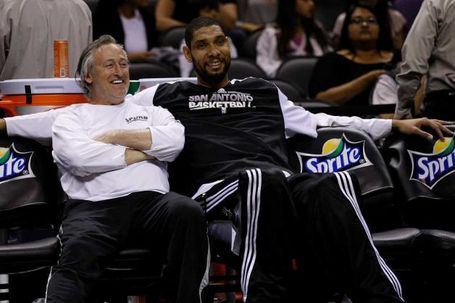 San Antonio, TX – The San Antonio Spurs today announced that long-time strength and conditioning coach Mike Brungardt has elected to retire from his position. His last day with the Spurs will be June 30.

"All of us will miss Mike a great deal," said Spurs Head Coach Gregg Popovich. "He has been an important part of the Spurs success over the last 17 years. He built our strength and conditioning program from the ground up and remains one of the best in the business. He has the respect and admiration of everyone in the organization, from players to coaches to front office staff. On a personal note I hate to see Brungy leave. He is a good friend and a wonderful man."

"This was a very tough decision," said Brungardt, whose first involvement with the Spurs occurred in 1990 when he served as a consultant, working with David Robinson. "I’ll certainly miss working with class athletes like Tim, David, Sean, Manu and Tony that this organization has always been noted for. But after 17 seasons, this feels like the right time to take everything I’ve learned from the Spurs, especially from Pop, and move into the next chapter in my life. I would like to thank all of them, and the entire Spurs organization for the many special memories, and wish all of them continued success and happiness."

Brungardt will still work with athletes from various sports on an individual basis, and will do consulting both in the United States and overseas.